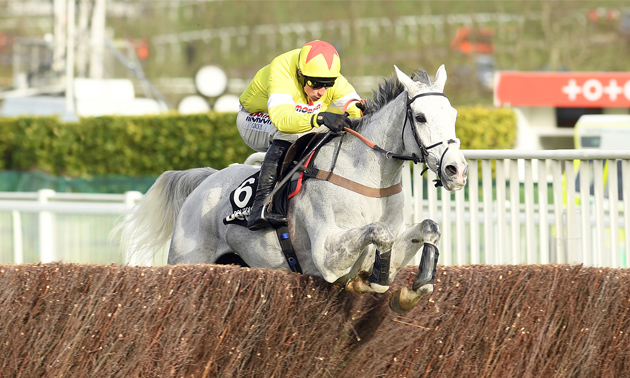 The Paul Nicholls-trained grey appeared to be on the decline after he was found to have broken blood vessels when suffering his sixth successive defeat in the 2019 Tingle Creek at Sandown.

However, he roared back to his best when following in the hoofprints One Man and Azertyuiop to provide his owner with a third victory in the Queen Mother Champion Chase at Cheltenham, and then picked up where he left off by bagging a second Tingle Creek last month – three years after his first.

Hales hopes his latest crack two-miler will finally be given the credit he deserves if he can add another Grade One success to his CV at Ascot on Saturday – a race in which Azertyuiop came up narrowly short when conceding lumps of weight to Isio in an epic renewal 17 years ago.

Hales said: “He’s very well, and I think he deserves to be favourite after what he did in the Tingle Creek and the Queen Mother before that. I’m not sure what the combined distance of those two wins were, but it must be a fair way.

“He’s always been a magnificent jumper. The season before last, his form was a little bit indifferent, and he didn’t run very well in the Tingle Creek – after which we found out he was bleeding. It’s possible that he’d bled before, and we didn’t pick it up.

“What people seem to have missed is Paul changed his training routine after that, and at the same time he has improved out of all recognition – he’s a different horse.

“We have no concern at all about the ground. He’s a genuine two-and-a-half-mile horse, which you need to be around Cheltenham, and you’ll need to be on Saturday.”

Harry Skelton partnered Politologue at Cheltenham and at Sandown – but with the rider’s brother Dan training Nube Negra for this season’s Champion Chase, Skelton has given up the mount, meaning Harry Cobden will be reunited with Politologue this weekend.

“Harry Skelton has done a great job for me, and I’m very sorry to see him go,” Hales added.

“It was Harry’s decision. His brother has this horse to run against us in the Queen Mother – and he’s got to ride him, hasn’t he?

“I’m very happy to have Harry Cobden riding our horse, so I’m not complaining.”

Cobden is looking forward to renewing the partnership with Politologue, having won the Tingle Creek on him in 2017.

He said: “Politologue is the favourite going into it, and I’m just delighted to be back on him.

“Everything he has done since the Tingle Creek last season has been great. The training performance for the Champion Chase was unbelievable. Paul came in one morning and said ‘I’m going to train his horse differently’ – he rewrote all his rules.

“I schooled him Monday, and he jumped great. I saw him work on Thursday morning – and although I didn’t ride him, he seemed in fantastic form, he was very bullish and looked a million dollars.

“I wouldn’t get off Politologue to ride any of the others in the race, because he is the form horse going into it.”

Politologue’s rivals include his stablemate Duc Des Genievres and Philip Hobbs’ stable star Defi Du Seuil, who was a red-hot favourite for the Champion Chase after denying the now-retired Un De Sceaux a fourth Clarence House success 12 months ago.

The JP McManus-owned gelding disappointed at the Cheltenham Festival and was pulled up on his seasonal reappearance at Prestbury Park in November, but jockey Richard Johnson hopes he will show his true colours this weekend.

He said: “I was at Phillip’s and schooled him on Wednesday morning, and he was very good. Let’s hope the winners we’ve had recently are a good omen and that Defi can put his last run behind him.

“He’s in good form at home and he’s been given all the time in the world. He feels in rude health, and we go full of hope.

“He’ll have to pull out his A-game, because he’s up against some good horses. He feels sharp at home, wanting to take on the fences – and he’s still a young horse.”

Former Ascot Chase winner Waiting Patiently was supplemented earlier this week, having made an excellent return from more than a year on the sidelines when runner-up to Frodon in the King George VI Chase at Kempton on Boxing Day.

The talented but fragile 10-year-old has proven his versatility over a variety of distances, and trainer Ruth Jefferson is unconcerned by dropping back almost a mile in trip.

Speaking on a call hosted by Great British Racing, she said: “The ground at Kempton was the fastest I would have run him on, and we’re at the opposite of that spectrum on Saturday – but he’s got form on heavy ground, and I don’t see it being a problem.

“He’s performed at every trip on every sort of going description. It’s a case of him not being the easiest horse to keep sound and healthy – so while we’ve got a sound and healthy horse, we’re going to take our chance to run him.

“I can’t see why the trip will bother the horse, so I’m not going to let it bother me.

“I think there’s less pressure in our situation because nobody expects you to win – you’re just that small person who might rock up!

“I don’t get excited and I don’t get nervous. You don’t go into a Grade One thinking you’re going to win it, but I think there’s a lot in his favour because he’s versatile trip-wise, he’ll like the ground and likes the track.”