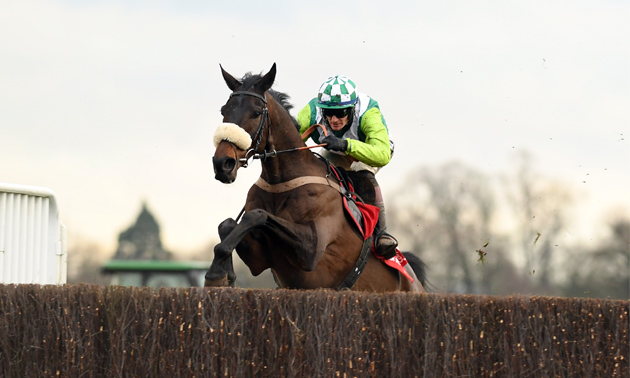 Paul Nicholls reports Clan Des Obeaux to have picked up a slight injury at Haydock but remains on course to bid for a hat-trick of victories in the Ladbrokes King George VI Chase.

The Ditcheat trainer has revealed the eight-year-old suffered an overreach cut when beaten two lengths by Bristol De Mai in the Betfair Chase on Saturday.

The grey gallops them into submission in the mud at @haydockraces and holds off the gallant Clan Des Obeaux in 2nd 👏pic.twitter.com/My3t6eqaLh

It is not a serious setback, however, and Nicholls expects Clan Des Obeaux to be back in training by the weekend.

Nicholls said: “He actually stumbled at the start and did quite a nasty overreach on the bulb of his heel – Sam (Twiston-Davies) could easily have got unseated.

“For a couple of strides Sam was looking down and wondering what had happened.”

“He had a little cut, so it means he is going to have an easy week this week, canter him on Saturday and then quietly build up his fitness again over the next month.”

Bearing that in mind, Nicholls was delighted with Clan Des Obeaux’s performance in a race run in attritional conditions.

“I thought all the way up the straight he was going to go and win, but you knew Bristol De Mai was going to be hard to go by.

“I think the rain they had before racing made the ground very heavy, which counted against us. I think we ran out of stamina from the back of the last.

“It was great preparation for the King George.

“Admittedly, he probably had a harder race than I would have liked, but he was fit and well for that day and he will get over it quickly. I think it was one of his best runs.”

Cyrname finished second behind his stablemate in the King George last Christmas and is set to take on Clan Des Obeaux again after winning the Charlie Hall Chase at Wetherby.

Cyrname puts in a classy performance to take the Charlie Hall Chase at @WetherbyRaces, scoring in great fashion for @PFNicholls and @CobdenHarry!pic.twitter.com/rN3nJPvG43

“This year Cyrname had a run at Wetherby, and I wanted to give him an extra month,” said Nicholls.

“He has come out of that really well, as opposed to having a mega hard race against Altior, which was too close to Kempton – and I never really had him right afterwards. I am very happy with his progress.

“They are going into it a little bit in reverse to last year. Last year Clan had the run in October and had a long period to build up to Kempton – now he has had a very hard race only a month before. I think it won’t be a problem for Clan – he will get over it quicker than Cyrname would have done.

Nicholls could have as many as four runners in Kempton’s Boxing Day feature, with Frodon and Real Steel also possible contenders.

“I think Real Steel will improve enormously for his run on Saturday, and he is a lively outsider,” he said.

“Frodon is going to run in the Many Clouds Chase at Aintree on December 5, and then that gives him three weeks. He thrives on his racing, so he could easily go as well.”