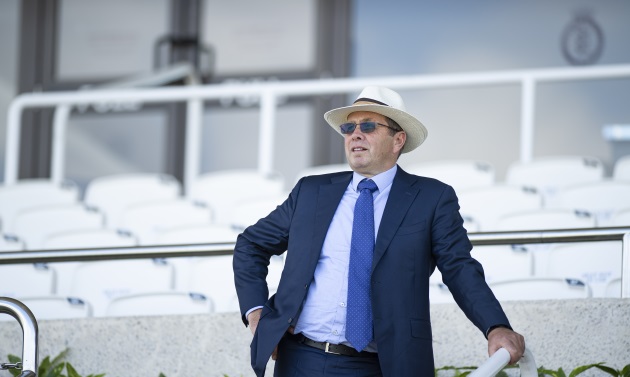 Ger Lyons’ unbeaten filly Sacred Bridge puts her flawless record on the line in the Juddmonte Cheveley Park Stakes at Newmarket on Saturday.

The two-year-old’s four runs thus far have produced four victories, beginning with a Naas maiden in June and progressing to the Listed Tipperary Stakes later in the same month.

The valuable Ballyhane Stakes was Sacred Bridge's next success before a step up to Group 3 level that was deftly handled when the bay took the Round Tower Stakes last month.

This is another step up and Lyons expects the Juddmonte-owned daughter of Bated Breath to make the grade after her impressive three-and-three-quarter-length triumph at the Curragh.

“I see she’s favourite, whatever that means, she’s rocked up four times and won four times,” he said.

“I wouldn’t change her for anything.

“What other trainers are doing is their business and my job is to get this filly there on Saturday in good health and if she rocks up and does what she has been doing all summer then happy days.

“This is her sternest test, she’s stepping into the big leagues now in Group 1 level and invariably they fail – and that’s not to be negative.

“In the Round Tower, I thought the way she did it in Group company was visually spectacular and it was also fast ground which I think is the key to her.

“She’s favourite, as long as she runs well I’ll take it, but I hope, as always, to win it. She hasn’t let me down yet.

“You live in hope you have a Group 1 horse, but normally you don’t and you are disappointed a lot of the time. After the Round Tower I don’t think she’s out of her depth.”

Vying for favouritism behind Sacred Bridge is Andrew Balding’s Sandrine, a three-time winner whose perfect run of form was interrupted when she was beaten a length by Zain Claudette in the Lowther Stakes at York.

The daughter of Bobby’s Kitten took her maiden in May before going on to triumph in the Group 3 Albany Stakes at Royal Ascot and the Group 2 Duchess of Cambridge Stakes at Newmarket.

“It was probably too quick a test and the draw didn’t work out as we’d have wanted at York.

“She doesn’t have to carry a penalty in this and she seems in good form, so we’re hoping she’ll run well.”

Ismail Mohammed’s Zain Claudette is a key challenger after enjoying a hat-trick of successes this term, a winning streak that includes a Newmarket maiden and the Group Three Princess Margaret Keeneland Stakes in addition to the Lowther.

A run at the highest level is now imminent and Mohammed’s confidence in his filly’s chances has been boosted by her recovery from her past wins and her work at home.

“We have been running her every month, we don’t run her every few weeks and she has very good recovery and she is handling everything so well,” he said.

“It’s the same fillies, it’s only the Irish fillies that she hasn’t beaten.

“In the end we will see if she is the champion or not, but from my side I feel she is already a champion and she has shown us so much speed.”

Ownership group Nick Bradley Racing have two chances in the race, the most-fancied of which is the George Boughey-trained Corazon.

The filly has won twice this season, a Lingfield maiden and the Group 3 Prix d’Arenberg, and was last seen coming home third in the Flying Childers Stakes at Doncaster having led for much of the race.

“She won well in Longchamp from a good draw,” Bradley said.

“She went to Doncaster and the race wasn’t run to suit, she hit the front far too soon and then idled in front.

“She’s stepping up from five (furlongs) to six, which is a tiny concern, we were considering the Cheveley Park or the (Prix de) l’Abbaye and we may still try and do both.

The Bradley colours are also carried by Guilded, who is trained by Karl Burke and was a five-length winner when last seen at Beverley on Tuesday.

Prior to that the bay finished sixth in the Prix d’Arenberg at Longchamp, just one and three-quarter lengths behind Corazon.

“Based on that French run, myself and Karl thought she would have nearly won that Group 3,” Bradley said.

“She beat the filly at Beverley by five lengths earlier in the week, that filly (Dreams Of Thunder) was only beaten eight lengths in the Lowther and she beat her with Clifford (Lee, jockey) barely breathing on her.

“If she turns up in the same form we had her in going to Beverley then she will definitely outrun her odds.

“She’s been unlucky, in the Newbury Super Sprint she hit the front too soon, she’s probably the most unlucky filly we’ve got but she got her head in front this week and we do think a lot of her.”

Burke has another chance through Illustrating, who was a close third in the Prix d’Arenberg, while Joseph O’Brien’s Velocidad is looking to bounce back after a below-par effort in the Prix Morny at Deauville.

Attempting to take the prize back over the Channel is Florian Guyader, who brings Have A Good Day Over for the contest after her sixth-placed run in the Prix Morny and half-length victory in the Prix de Cabourg.