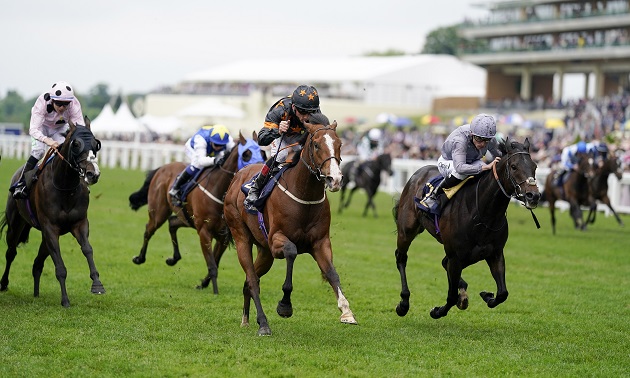 David Evans is just asking for Rohaan to enjoy a bit of luck when he bids for Group 1 glory in the Qipco British Champions Sprint at Ascot on Saturday.

Things have not gone the three-year-old’s way in three attempts at the top level so far – but Evans believes Rohaan has what it takes to make his mark.

The Mayson gelding has been a tremendous asset to the Evans team after being bought for 20,000 guineas at last year’s horses in training sales.

He has won seven times, including two Group races, and put in a tremendous weight-carrying performance to win the Wokingham at the Royal meeting.

Rohaan ran an amazing race at the Curragh last month after losing many lengths at the start. He stayed on strongly to finish fifth, just two lengths behind the winner Romantic Proposal.

“I’ve been counting down the days for the last three weeks,” said Evans.

“It was nice to see him bouncing back at the Curragh. It was disappointing on the day, but nice to see the horse is as good as I thought he was.

“I spoke to Ryan (Moore) and he said he’d rather be drawn with the speed horses. They are drawn low and he is drawn 15, but if he takes his time he can go wherever he wants.

“I think he’s the best horse in the race and with any luck he’ll win, but you always need the luck on the day. He’s a fantastic horse and hopefully the best is to come.

“I’m looking forward to Saturday. It’s a nice position to be in.”

Archie Watson has a strong hand with last year’s winner Glen Shiel and Dragon Symbol, who is due a change of fortune after finishing runner-up in the July Cup and being demoted from first to second in the Commonwealth Cup.

“If reproducing their Royal Ascot form, either of them ought to be very hard to beat. It’s going to be lovely racing ground, which will be spot on for ‘Dragon’ but might not be ideal for ‘Glen’,” said Watson.

“Dragon Symbol hasn’t run a bad race all year and stepping back up to six furlongs will suit him grand. On his Royal Ascot and July Cup form in particular, he should be bang there, and he deserves one of these.

“Glen Shiel ran fantastic races in the Diamond Jubilee and July Cup, and then it was funny ground at Deauville, where he was in the middle of the track. It was rattling ground at Haydock, but he ran a much better race at Ascot last time and that was always a step towards this race.

“I’m delighted with the way he is and I’m putting on some headgear, just to sharpen him up.”

Art Power was fourth in this race 12 months ago and returned to top form with a five-length romp in a Group Three at the Curragh last month. Trainer Tim Easterby believes the grey is at the top of his game.

“He’s an absolute machine and he’s in great form,” he said.

“He goes well at Ascot – not that it would bother him where the race was run as he’s so adaptable – and he’s in great order, so fingers crossed. I see he’s nearly favourite now, so no pressure eh?”

Owen Burrows was delighted with Minzaal’s comeback run on this track after a year off and is expecting a big run from him.

“It was very pleasing to see him run such a good race (in the Rous Stakes) and it proved he’s still got it. It’ll be exciting when we get him there on Saturday and he should run well,” said Burrows.

“The ground will be much better than last time and he’s back up to six furlongs, which we know he’s a lot more effective at – we’re looking forward to it.”

Charlie Appleby feels Creative Force now knows what is required over this trip after creditable efforts in the July Cup and Haydock Sprint Cup.

“Creative Force is now learning how to sprint at the top level,” Appleby told www.godolphin.com.

“He won the Jersey over seven furlongs at Royal Ascot, but then he dropped back to six for the July Cup, in which he finished a good fifth. I feel he has learned a lot in his runs over sprint distances.”

Vadream was supplemented thanks to winning the Bengough Stakes over the course and distance. The filly’s trainer Charlie Fellowes sees her liking for Ascot as an advantage.

“She is a very good filly and a quick filly. She has run very well at Ascot which is always a big plus on that straight course. She needs to step forward again, but the better ground would not be an issue.

“We go there very much in hope rather than expectation, but she is in cracking form.”

Ralph Beckett is happy to drop Kinross to six furlongs for the first time after being campaigned over further.

He said: “He got a bit further back than we would have liked in the Prix de la Foret, but he finished off well. I’ve always had a hankering for running him over a stiff six. There is only one way to find out whether that is a good idea or not.”