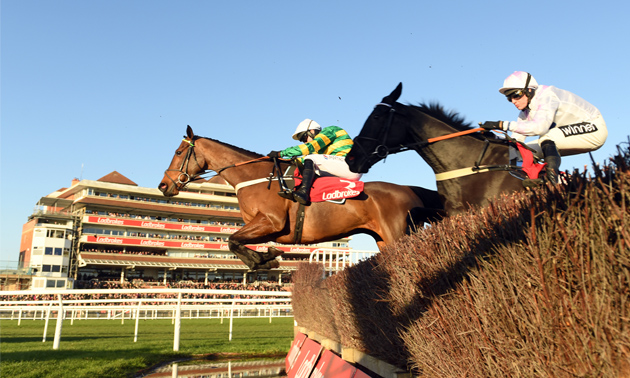 Nicky Henderson reports Champ in good order for his belated return to competitive action at Newbury on February 13.

Last season’s Cheltenham Festival winner is unbeaten in four visits to the Berkshire track and will be having his first outing since his thrilling victory in the RSA Insurance Novices’ Chase, where he charged up the hill to deny Minella Indo.

Henderson said: “He is all set for the Denman Chase and we’re looking forward to it.”

With Haydock seemingly doomed to the elements on Saturday, Henderson is set to reroute Buveur D’Air to the Contenders Hurdle at Sandown on February 6.

The former dual Champion Hurdler has not raced since a piece of wood from a hurdle became lodged in his hoof when beaten by Cornerstone Lad in last season’s Fighting Fifth Hurdle at Newcastle, requiring him to undergo surgery.

His trainer said: “It looks like we will have to forget Haydock and head to Sandown. It’s a race he’s won three times and it will be good to get him back.”

Back to Newbury and Henderson is readying a team of three in the Betfair Hurdle, headed by Buzz, who could end up with top-weight in the £125,000 contest.

The Seven Barrows handler will back up the Thurloe Thoroughbreds-owned gelding with Mister Coffey and the mare Marie’s Rock.

Henderson landed the prize for Thurloe syndicates with Sharpical in 1998l, as well as Geos in 2000 and 2004. He has an exemplary record in a race originally known as the Schweppes, and is pleased with this year’s challengers.

He said: “Buzz has always had the race on his radar, but after his good efforts this season will have to carry top-weight. He’s in good form and very well in himself.

“Marie’s Rock had been off for a while when she returned here in November and will, all being well, do some work on Saturday.

“Mister Coffey is in very good form and an intended runner.”

GO
50% OFF SATURDAY PREMIUM
GO
CHELTENHAM FESTIVAL GOLD: SAVE OVER 40%