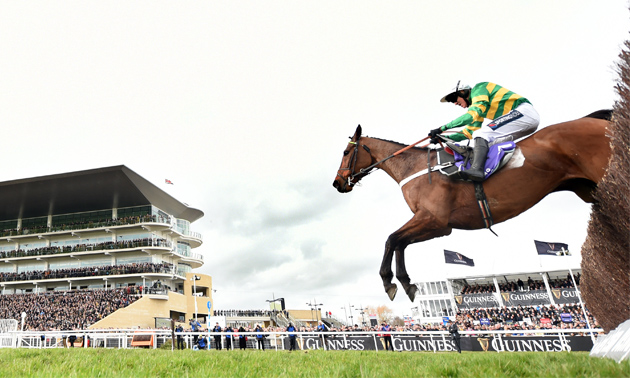 RSA Chase hero Champ is among 23 entries for the Savills Chase at Leopardstown’s Christmas Festival on December 28.

Nicky Henderson’s eight-year-old snatched victory from the jaws of defeat when nabbing Minella Indo in the dying strides at Cheltenham in March.

He faces a tough test on his first venture out of novice company with his potential rivals including the last two winners of the race – Gordon Elliott’s Delta Work and the Willie Mullins-trained Kemboy.

Elliott also has Presenting Percy, The Storyteller, Battleoverdoyen, Samcro and Shattered Love while Allaho, Acapella Bourgeois and Easy Game are among Mullins’ contingent.

Minella Indo could re-oppose and is part of a strong entry from Henry de Bromhead’s stable.

Elliott’s charge made a successful reappearance in the Grade Two Lismullen Hurdle at Navan.

Among other big names are Fury Road, Bacardys, Bachasson, Thomas Darby, The Worlds End and Ronald Pump for Matthew Smith.

Envoi Allen and Asterion Forlonge are among 19 entries for the Racing Post Novice Chase on December 26.

Both horses also have the option of the Matchbook Betting Exchange Faugheen Novice Chase at Limerick the same day.

The De Bromhead-trained A Plus Tard and Chacun Pour Soi were first and second in the Paddy’s Rewards Club Chase in 2019 and could have a re-match on December 27 after 17 were entered.

Put The Kettle On, Notebook and Samcro are also in the mix.

Star mare Honeysuckle, winner of the PCI Irish Champion Hurdle over this course and distance in February, is among the 11 horses entered for the Grade One Matheson Hurdle on December 29, the last of four days of the meeting.

Aspire Tower, Abacadabras, Saint Roi and Sharjah, winner of this race for the last two years, are in the list as is the Tom Symonds-trained Song For Someone following his victory in Ascot’s Coral Hurdle.

Envoi Allen is also among 23 entries for the Neville Hotels Novice Chase as Gordon Elliott seeks a fourth consecutive win and fifth in total in this Grade One.