Morny glory for Campanelle and Dettori 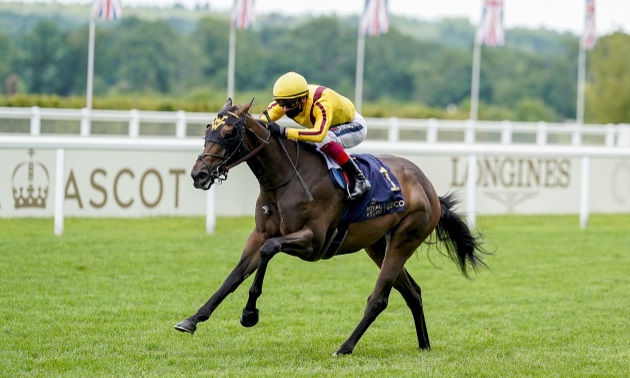 Campanelle maintained her unbeaten record as she ran out an impressive winner of the Darley Prix Morny at Deauville.

Trained by American Wesley Ward, who was winning the Group One for a third time following the victories of No Nay Never and Lady Aurelia, she beat a strong-looking field with a modicum of ease.

Typically quick through the early stages of the race, Frankie Dettori was keen to head towards the centre of the track.

Dettori, who opted to miss the Ebor meeting to ride in France over the last two weekends, appeared to wait for the others a furlong out before asking Campanelle to quicken up.

And she did so, in impressive fashion, handling the switch up to six furlongs and soft ground in style.

Clive Cox’s Nando Parrado, a shock 150-1 winner of the Coventry Stakes at Royal Ascot, stuck to the rail with only Tactical following, and kept on well to claim a creditable second.

Richard Fahey’s Rhythm Master ran a big race to take third, but the Queen’s Tactical finished out of the frame.

CAMPANELLE makes all under Frankie Dettori and storms clear inside the final furlong to land the Prix Morny at Deauville for Wesley Ward! 🇫🇷pic.twitter.com/dMVN2Ya1X3

Dettori told Sky Sports Racing: “I was very impressed with her in the Queen Mary. She’s not like Lady Aurelia, she was small and very fast.

“She’s much taller, she’s grown since Ascot, she’s got an amazing, long stride and while she coped with the ground, she’s much better on good ground.

“Wesley was very confident. I knew I had a good filly, but I was worried about the ground – her class came through.

“She’s been here all week, I’ve seen her every day and, being honest, she’s half asleep in the box, but she knows what it’s all about and was ready to go.

“I had no plan, she jumped so I was in front and she’s quite sensible and able to listen to my commands. When I asked her to slow down she did, and when I asked her to quicken, she quickened. She’s a very smart two-year-old.

“The Cheveley Park is an obvious target and I’m sure the idea of the Breeders’ Cup over a mile might come into it, but over a mile, that’s a different ball game.

“I’ve had a fantastic week with some great results.”

Ward, speaking from his Keeneland base, said: “That was great. The ground was always the concern.

“I always remember the year No Nay Never won (2013), I walked the course with (owner) Paul Shanahan, we walked about 17 miles that day then he finally asked me and I said I thought it would be all right, to which he shouted “we’ll run then”.

“This filly had shown no issues in the soft ground in her morning workouts, so I actually thought it could have been an advantage.

“She stayed the trip really well and is getting bigger and stronger all the time, she’s an amazing filly and I’m lucky to have her.”

Looking towards future targets, Ward said: “The Cheveley Park closes on Tuesday and I’ve spoken with Adrian Beaumont (International Racing Bureau), so we’ll nominate for that to keep her options open.

“With a filly like this, it suits to space her races out. We had Hootenanny finish second in this race and he went on to win the Breeders’ Cup Juvenile Turf.

“That would probably be more on the agenda, especially as the Breeders’ Cup is on her home track at Keeneland. I think a two-turn mile will suit.

“We have Golden Pal, who ran the fastest two-year-old time in America the other night at Saratoga, so I’d hate to put the two against each other.”

Cox was thrilled with Nando Parrado’s performance and expects him to progress again.

He said: “He ran a blinder. I’m really pleased with the effort. We’ve always believed in him and that confirmed Royal Ascot was no fluke. It was a really positive performance and Christophe (Soumillon) was very complimentary about him, so I’m sure he has a really bright future.

“The ground was the same for all of them, but he has got through it. Kodiac was the sire of the first two, but he has managed the easy ground well. He will get another furlong and possibly even might get a mile next year.

“I think he could end up going seven towards the end of the season on some autumn ground. He has got an entry in the Lagardere, but autumn ground would very much be agreeable with his performance, and he is a horse that is still very much a baby and I’m looking forward to his progress.”