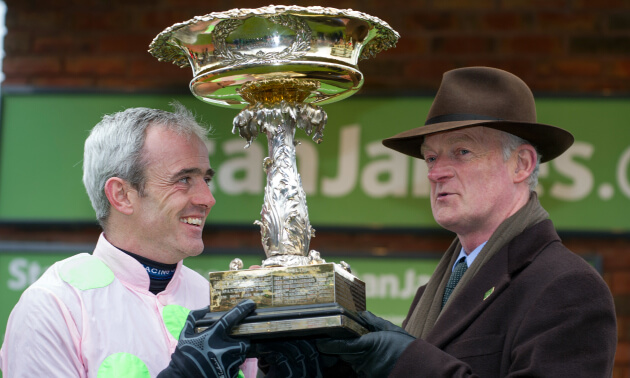 Willie Mullins smashed his Irish Grand National hoodoo as Burrows Saint led home a one-two-three for the trainer in the marathon handicap chase at Fairyhouse.

The well-backed 6-1 favourite was given a confident ride by Ruby Walsh, who was winning the race for a third time, to lift the first prize from stable companions Isleofhopendreams and Acapella Bourgeois.

BURROWS SAINT leads home a remarkable 1-2-3 for @WillieMullinsNH in the 2019 #IrishGrandNational at @Fairyhouse under @Ruby_Walsh! 🏇🇮🇪

Total Recall, another of Mullins' seven runners, set the pace before Whisperinthebreeze built up a decent lead on the final circuit.

He was soon reeled in by the Mullins' brigade though, with Burrows Saint, owned by Rich Ricci, going on from three out.

Walsh kept a bit in reserve on the six-year-old to hold the challenge of Isleofhopendreams (20-1), who was also second in this race last year.

Acapella Bourgeois (18-1) was third to complete a Mullins clean sweep, with Snugsborough Benny (14-1), trained by Liam Cusack, in fourth.

Mullins, who also landed his first Cheltenham Gold Cup victory with Al Boum Photo back in March, admitted he had not expected Walsh to opt for Burrows Saint, but was more than satisfied with the result.

He said: "Ruby was very confident throughout, but I thought Johnny Burke (on Acapella Bourgeois) was too and all our riders rode the last mile fantastic.

"I was a little bit worried when Pairofbrowneyes fell early and then C'est Jersey followed him. I was thinking things are not working out well.

"Then I looked back and our horses were up in the front five or six all the time, and they were jumping great.

"That was the plan - to have everything jump off up there. Total Recall was too free, jumping too well and too free, and he just got tired.

"It was a tremendous result. It's just been one of those years where we have done things that we haven't done before.

"I'm very happy for all the horse, the owners and the riders.

"C'est Jersey and Pairofbrowneyes falling early were disappointments, but I think horses and riders are OK.

"I was a little surprised Ruby chose him as I thought he might go for something with more experience.

"Obviously he gave him a great feel the two days he won on him. I think that's his third run in six weeks, so it's shows what kind of ability he might have in the future.

"I thought for a couple of seconds that Danny (Mullins on Isleofhopendreams) might win it jumping the last, as he was coming with a wet sail.

"It was another good run from him as he was second last year.

"I'll see how they all come out of it. A lot of my horses have been very lightly raced this year and I'm keen to race them if I can find nice races for them in Punchestown or even go further."

Burrows Saint was having just his fifth start over fences, but his inexperience did not worry Walsh at all.

"I don't really want to be taking part anymore, I want to win. That's why I went for the unexposed horse.

"He made one or two novicey mistakes, but he got into a great rhythm when the race slowed down. He got travelling really well in a lovely position beside Danny, and after that he jumped super most of the way.

"He had two runs over fences in France as well. Commanche Court only had four and Our Duke only had three. I know they went on to be Gold Cup horses, but they had plenty of weight to carry while he only had 10st 8lb.

"To my eyes, he'd more experience than either of them had.

"I joined Willie when I was 16, nearly 24 years ago and it's a long time not to fall out with someone!

"I saw C'est Jersey going at the sixth and Any Second Now went at the eighth - the position he was in created a huge hole on the inside that I was able to slot into perfect from there.

"He started to slow down two out, but I knew he would be idle in front and I was hoping that whatever it was that was coming, he'd go again."