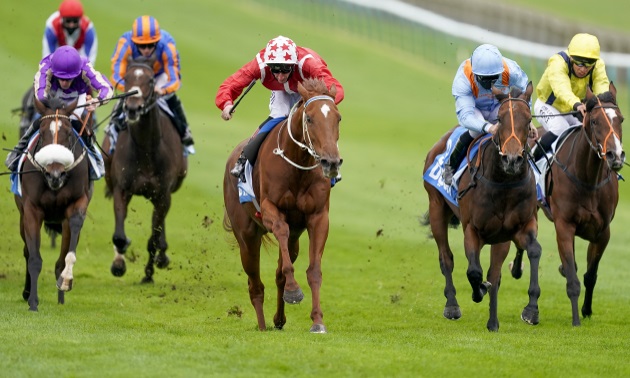 Jane Chapple-Hyam’s Saffron Beach is to be reunited with William Buick in her bid to retain the Royal Bahrain Sun Chariot Stakes title at Newmarket next weekend.

Saffron Beach claimed a first Group One win in the contest last season and has added a further title at the highest level to her CV this year when landing the Prix Rothschild at Deauville in August.

From there she set sail to Leopardstown for the Matron Stakes, another Group One, where she was the runner up behind Paddy Twomey’s Pearls Galore.

Ridden on that occasion by Hollie Doyle, who had got the leg up on the chestnut twice before, Saffron Beach will this time be the ride of Buick – the same jockey who steered her to Sun Chariot success last term.

“William is back on board her and they are a good winning combination. I’m sure he wants to win another Sun Chariot as much as Abington Place (Chapple-Hyam’s yard), so I’m sure he will be doing his best aboard her,” the trainer said.

“I believe she is a horse jockeys can get a quick rapport with. She is straightforward once in running, getting to the start she can take a hold.

She added: “I weighed her on Tuesday night and she was over 500 kilograms. It is telling you she has the power and the strength.

“I think because she has strengthened up and because we have spaced her races we’ve not got a lean machine but a nice, developed mare which is good in that sense. She is very powerful in her front now with powerful shoulders.”