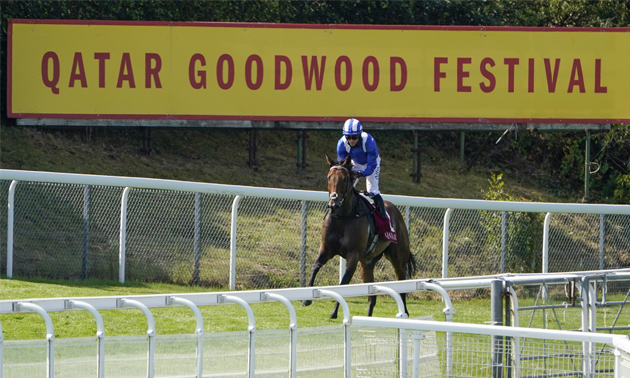 Battaash smashed his own track record as he won the King George Qatar Stakes for the fourth successive year at Goodwood.

Charlie Hills’ brilliant sprinter lowered the record five-furlong time he himself had previously set, scorching the turf on a sizzling hot day on the Sussex Downs to pass the post in under 56 seconds for the first time.

The 2-7 favourite and his jockey Jim Crowley were already in front at the halfway point and surged clear to win by two and a quarter lengths from Glass Slippers – in 55.62 seconds, compared to the previous-best 56.20.

Ornate was just another neck away in third, at 100-1, as the first three home all broke the old record, set by Battaash when he completed his hat-trick in the race 12 months ago. This time, he was more imperious than ever at the age of six – and remains unbeaten at Goodwood.

Hills said: “The conditions were great for him today and they obviously went a very fast pace. The key to him is to not take him back really – his main advantage is he seems to get horses out of their comfort zone in the middle part of the race.

“He’s a six-year-old now and knows more about racing than most of us at this stage. He’s got very professional, we’ve got him in a great routine at home and everyone in the yard has done a great job.

“It’s a credit to the horse to still have the enthusiasm he has – he’s a true athlete really.”

Looking to plans, Hills said: “That (Nunthorpe) would certainly be the plan. It’s good timing and he did the two races last year, so we’ll try to do the same.

“It would be very exciting to go to the Breeders’ Cup at the end of the year, but we’ll have to speak to Sheikh Hamdan and his team.

“We want to get the Nunthorpe out of the way first and it all depends on the ground as well – the ground went very soft in the Abbaye last year, which didn’t suit him at all, so we’ll maybe be looking elsewhere if the ground is soft.”

Kevin Ryan was proud of the effort of Glass Slippers, who looks more likely to go the Sprint Cup at Haydock rather than York.

Ryan said: “She has run a blinder. I thought for a minute she was going to give him a race, but it is a great achievement by Battaash to win this race four years running.

“I’m delighted with our filly. It is a possibility we could look at the Nunthorpe, but she is in the Flying Five in Ireland and we wouldn’t mind going back up to six furlongs again in the Sprint Cup at Haydock.

“I wouldn’t rule out York, but I’ve not ruled it in. We always planned to run in the Sprint Cup at Haydock as she is as effective over six as she is over five furlongs. That could be an interesting race.”