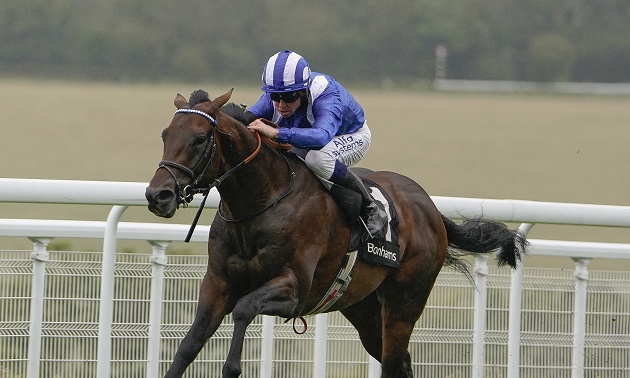 Baaeed continued his seemingly relentless march to the top with another brilliant victory in the Bonhams Thoroughbred Stakes at Goodwood.

The William Haggas-trained Baaeed has made giant strides since making a winning debut at Leicester in early June, following up with a wide-margin novice win at Newmarket before successfully stepping up to Listed class in the Henry Cecil Stakes at the July meeting.

In theory this Group 3 contest represented another hike in grade, but the son of Sea The Stars ultimately justified prohibitive odds in devastating style.

Jim Crowley was content to bide his time aboard the 2-5 favourite – and just had to give him a tap down the shoulder early in the straight to encourage him to close the gap on those in front of him.

But he soon came back on the bridle and after ranging alongside El Drama a furlong out he scooted clear under to prevail by six and a half lengths without being fully extended.

A delighted Haggas said: “It was very impressive, I was thrilled because I wasn’t sure about the ground, but every time he runs he just keeps doing that, it’s fantastic.

“What he (Crowley) said was that he missed a loose shoe that came flying, that would have been interesting.

“Jim was very happy, we’re all soaking it up and enjoying it.

“I didn’t (see him as a miler) to start with, but I said to Jim and Angus (Gold) there, I can’t see any point in going up in trip from here at the moment. We’ll keep him at a mile, I don’t know where we’ll go.

“The three races he’s in are the Jacques le Marois, the Celebration Mile and the Moulin at Longchamp.

“I don’t suppose he can do all three, the Jacques le Marois might be a bit quick, it’s the 15th (of August) so it’s not very long."

Asked if he had been tempted to run in the Sussex Stakes, Haggas said: “Yes, but he wasn’t in it because when the Sussex Stakes closed he hadn’t run. Not many put an unraced horse in a Group 1 like that. We toyed with the idea of supplementing and I guess if this race hadn’t been here we’d have liked it more.

“But when the unscheduled rain came on Monday night I was very glad we hadn’t supplemented. I’m very happy to run him in a top-class race next time.”

Of the placed horses, Roger Varian said of El Drama: “It was a solid effort but we ran into one today. He’s getting better with every race, but the winner looks like a Group 1 horse.”

Sir Mark Todd added of third home Tasman Bay: “The aim was to give him a warm up today to put the final touches on him for France (Prix Guillaume d’Ornano, Deauville) in two weeks.

“To be now Group-placed over a mile is just great, we tried to stretch the winner but have been blown away.”