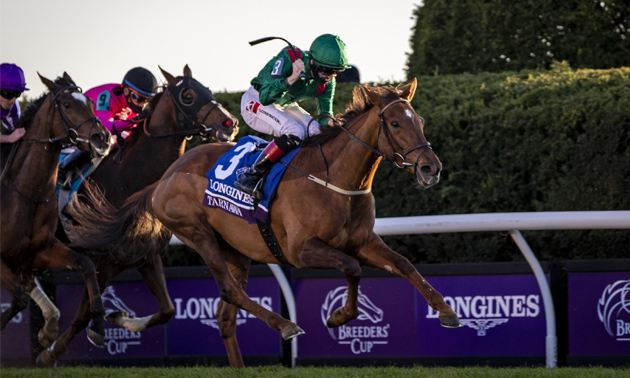 Tarnawa makes her eagerly-anticipated return to action in the Grant Thornton Ballyroan Stakes at Leopardstown on Thursday.

Dermot Weld’s star mare enjoyed a spectacular and unbeaten campaign in 2020, landing back-to-back Group 1 victories in France before providing her trainer with a first Breeders’ Cup win at Keeneland in November.

Tarnawa has not been seen since the latter of those triumphs, but will be a extremely short odds to pick up where she left off under Colin Keane in Thursday’s Group 3 feature – although her trainer has sounded a cautionary note.

Speaking on Nick Luck’s Daily Podcast, Weld said: “We’re very, very happy with her. The only thing is she’s done herself extremely well through the summer and she’s just carrying a bit more than I’d like condition-wise for her first run.”

On deliberately giving her a long break before her return, the Rosewell House trainer said: “It worked really successfully for her last year (started in August) – she won her two Group 1s in France and the Breeders’ Cup Turf, and I thought we’d kind of follow a similar pattern.

“But possibly because we’ve had a very, very dry and warm summer in Ireland and the ground has been pretty firm I would have liked to have got a bit more work into her. But I’m happy with the filly physically and mentally.

“I suppose she’s bigger and stronger in many ways, but I just want to warn I would like to have her a shade fitter than she is going into the race.

“Last year I had her very forward, and she put up an excellent performance at Cork and won her Group race well. She’s in great form again this year, but possibly not quite as advanced in her training.

“It’s a long road all the way into November, so we’re ‘hasting slowly’. She’s just not quite as forward this year as I had her last year.”

Among the opposition to Tarnawa is Aidan O’Brien’s Wembley – runner-up in the Dewhurst to his high-class stablemate St Mark’s Basilica last year and exclusively campaigned in Group One company so far this season, most recently in the Prix Jean Prat.