Blackmore teams up with A Plus Tard in Gold Cup 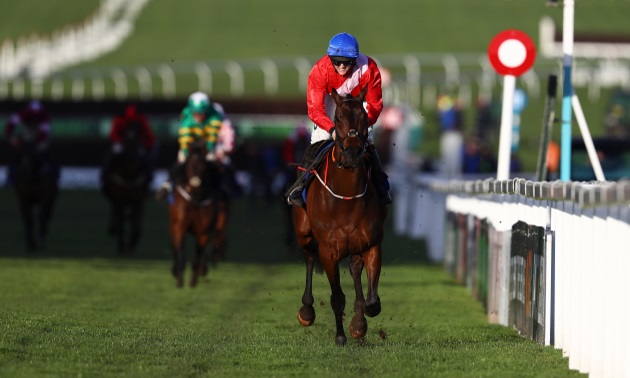 Rachael Blackmore is set to ride A Plus Tard in the WellChild Cheltenham Gold Cup, trainer Henry de Bromhead has revealed, with Jack Kennedy on his other runner, Minella Indo.

Blackmore partnered A Plus Tard to victory in the Close Brothers Novices’ Handicap Chase at the Festival in 2019 and when third in the Ryanair Chase last year.

However, Darragh O’Keeffe was on board when A Plus Tard registered his biggest success so far, in the Savills Chase at Leopardstown in December.

On that occasion, Blackmore rode Minella Indo, who fell for the first time in his career when sent off the 5-2 favourite.

De Bromhead said: “A Plus Tard was really good in the Savills Chase at Christmas. I am delighted with him. He had a hard enough race there so we decided to put him away for this.

De Bromhead reports Minella Indo, who was dramatically caught close home by Champ in the RSA Insurance Novices’ Chase at last year’s Festival, to be in good shape after finishing fourth to Kemboy in last month’s Irish Gold Cup.

“He is in mighty form now and loves Cheltenham – he comes alive over there and his record is brilliant,” he said.

“He has a real live chance. It was tough to get nabbed like he was last year by Champ, but that’s Cheltenham – these things happen and there is always drama.”

De Bromhead has confirmed Honeysuckle as a definite runner in the Unibet Champion Hurdle, giving Blackmore another major chance in one of the showpiece events at Cheltenham.

“She’s going for the Champion Hurdle. That’s the plan, she seems in good form and all is good. We were delighted with her at Leopardstown winning the Irish Champion Hurdle,” said the County Waterford trainer.

“She’s an amazing mare and we feel very lucky to have her.”

Honeysuckle could have gone for the Close Brothers Mares’ Hurdle which she won in 2020.

Aspire Tower and Jason The Militant could also line-up for De Bromhead in the Champion Hurdle.

“We’ve also got Aspire Tower in it and possibly Jason The Militant. They both have good chances,” he said.

De Bromhead plans to have two runners in the Betway Queen Mother Champion Chase, with Blackmore on Notebook and Aidan Coleman booked for Put The Kettle On.

Put The Kettle On has won all three of her starts at Cheltenham, including the Arkle Trophy in March last year, and he said: “She loves it over there. She’s just come alive since she started going there and just keeps improving all the time.

“Obviously she had the option of the mares’ chase, but we’ve decided to go with the Champion Chase. I suppose the records of Arkle winners are so strong and we’ve got our mare’s allowance so we’ve said we’ll give it a go.”

The first mare to win the Arkle for 40 years!

Put The Kettle On makes it five from six over fences and memorably triumphs in the Racing Post Arkle for @HenrydeBromhead 👏 @AidanColeman #CheltenhamFestival pic.twitter.com/4hm0Bq8pTm

The mare was only seen three times from September 2019 before winning at Cheltenham last March and De Bromhead admits he has been keen to stick to a similar formula.

He explained: “It seemed to work well last year and although she’d been on the go for the whole of the summer in her novice season she hadn’t this year, so we had to get a couple of runs into her.”

De Bromhead rates Chacun Pour Soi as the main danger in the championship race and admitted he is yet to find a way to beat Willie Mullins’ star chaser, who is odds-on favourite for the Champion Chase.

“We’ve tried various ways to have a go at him with Notebook, but he’s just been so impressive. He’s going to be very hard to beat, but we’ll give it our best shot,” he said.

Notebook has disappointed on his two outings at Cheltenham, but De Bromhead is hoping he can put the record straight.

“I suppose it would have to be now, in fairness. But he’s a very good horse,” he added.