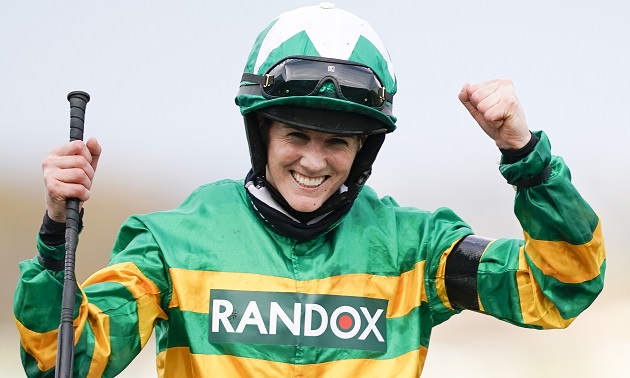 Rachael Blackmore’s record-breaking achievements in 2021 have been rewarded with a nomination in the World Sport Star category at this month’s BBC Sports Personality of the Year awards.

Blackmore, who Ladbrokes make the 5-2 favourite for prize, will be up against some of the biggest names in world sport such as tennis superstar Novak Djokovic and American Football great Tom Brady.

The 32-year-old secured her place in racing history when she became the first woman to be crowned leading jockey at the Cheltenham Festival with six winners, which included the Champion Hurdle on Honeysuckle.

However, she took her fame, and achievements, to new heights when becoming the first female to win the Grand National on Minella Times in April, garnering international attention in the following days.

Brady is second favourite behind Blackmore in the betting, followed by Thompson-Herah.

Nicola McGeady of Ladbrokes said: “Rachael Blackmore goes up against a list of global superstars in a bid to become the BBC World Sports Star of the Year. Her rivals have all achieved incredible things, but we think Blackmore comes out on top after she became the first female to win the Grand National.”

Voting has already opened and will close at 1pm on December 14, with the winner announced in the live show on December 19.