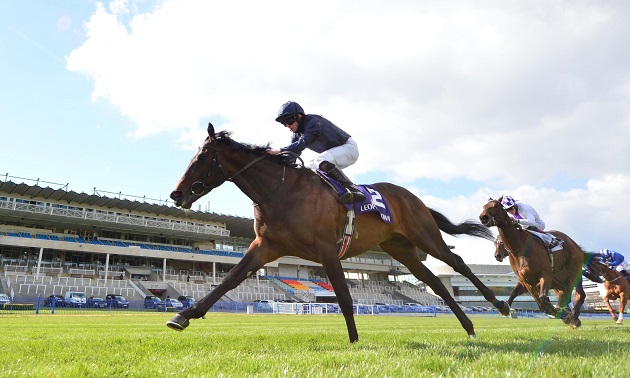 Bolshoi Ballet enhanced his Classic claims as he provided trainer Aidan O’Brien with an 11th victory in the P.W. McGrath Memorial Ballysax Stakes at Leopardstown.

The Ballydoyle handler saddled subsequent Epsom heroes Galileo and High Chaparral to land successive runnings of the Derby trial in 2001 and 2002, while four-time Gold Cup winner Yeats also features on the roll of honour.

O’Brien was doubly represented in this year’s renewal, with Dundalk maiden winner Lough Derg joined by stablemate Bolshoi Ballet – a winner at the track in the autumn before finishing fifth at Group 1 level in the Criterium de Saint-Cloud.

Ryan Moore kept things simple aboard the 2-1 favourite, allowing him to track the pacesetting Catena Zapata for much of the 10-furlong journey before taking over the lead two furlongs from home.

Lough Derg found a gap on the fence and briefly looked a threat, but Bolshoi Ballet hit the line strongly to score by just over two lengths. Lough Derg was run out of the places late on by Flying Visit and Taipan.

Coral make Bolshoi Ballet their 12-1 second-favourite for the Cazoo Derby at Epsom, with stable companion High Definition heading the market at 7-2.

A smooth win from Bolshoi Ballet gives the master of @Ballydoyle Aidan O'Brien an 11th win in the G3 P.W. McGrath Memorial Ballysax Stakes, with Ryan Moore doing the steering at @LeopardstownRC pic.twitter.com/TITpA3GdBN

O’Brien said: “You’d be delighted with him as he only ran on soft ground (last season) and will have learned a lot today.

“He’ll probably come back here for the Derrinstown if all goes well with him. He’s straightforward and, while you’re never sure, he should get a mile and a half. He goes to the line well.

“High Definition will go for one of the Derby trials. We didn’t want to give him two runs before the Derby, but we thought this horse would be able for two.

“He’s in full work and we’re very happy with him.”

O’Brien also had news on the Classic front of Santa Barbara, who has been all the rage for the Qipco 1000 Guineas in recent weeks after her trainer gave her a glowing report in a stable tour.

He said: “Santa Barbara is working very well. She’s going through her work in second gear with all the fillies.

“We were going to come here and then we said we’d go straight for the Guineas.

“It’s a big ask for a filly only after having one easy run in a maiden to go to the Guineas. She looks exceptional in her work, but she’ll be very green going to a Guineas. She’ll learn a lot either ways.”

Looking to the Newmarket meeting that starts on Tuesday, O’Brien added: “We might run Khartoum in the Craven on Thursday.”