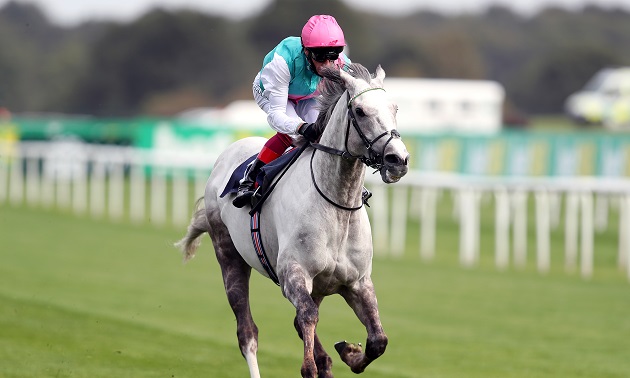 A Classic winner for whom the sky was thought to be the limit and a horse expected to go to the top himself are set to clash in a fascinating Al Rayyan Stakes at Newbury.

When Logician powered down the Doncaster straight to lift the St Leger under Frankie Dettori in 2019 he was seen as a real player for all the big middle-distance races to come the following year – a threat even to mighty stablemate Enable.

But he was struck by serious illness, one that put his life in danger, and just getting him back to the track has been an achievement.

That came in September last year back at Doncaster – a year on from his Leger demolition – and he looked to have retained his ability in winning a match race as he liked, beating the 107-rated Mythical Magic by seven lengths.

Rather than fly too high, John Gosden opted for a Group 3 assignment at York next, the relocated Cumberland Lodge Stakes – but the son of Frankel ran way below par and was a well-beaten last of four to Euchen Glen, at odds of 1-3.

No explanation has come to light, so connections will know much more about his future after Saturday’s Group 3 test, where the William Haggas-trained Al Aasy is expected to be a serious stumbling block, as he limbers up for the Coronation Cup.

He said: “We’re still a bit mystified why he ran so poorly at York on his last start in the Cumberland Lodge. He checked out fine and has had a straightforward winter.

“I think older horses always tend to take a little bit longer to come to hand, especially a horse who has had time off.

“With each of his works, he’s improved. He obviously had that severe peritonitis over the winter of 2019-20, and that is serious.

“He came back, albeit in a two-horse race at Doncaster, and looked to be back on track. Then nothing went to plan at York.

“We’ve always had faith in him, and Prince Khalid and the family were excited about him and wanted to give him every chance.

“He went nicely under Frankie (Dettori, last weekend), so hopefully this will prove a step forward.

“We know he’s got that talent, and he’s in the right hands.”

Al Aasy, meanwhile, has long been the apple of his trainer’s eye, and it was easy to see why in his striking victory in the John Porter over this course and distance last month.

Angus Gold, racing manager to the Shadwell Estate Company, said: “Al Aasy ran very well at Newbury first time out, and William has been happy with him since.

“We will see how he gets on this weekend at Newbury and take it from there, but William had planned to go to the Coronation Cup.

“At Goodwood last year, when he was last in the Gordon Stakes, nothing appeared to come to light – but he was a very immature horse physically, and maybe it all came quick enough.

“William did the sensible thing and gave him plenty of time off, and hopefully it will pay off this year – which it looks like it is.”

The big two are part of a field of six, which includes last year’s Dante winner Thunderous (Mark Johnston).