Aidan O'Brien wins the French Oaks with Joan of Arc 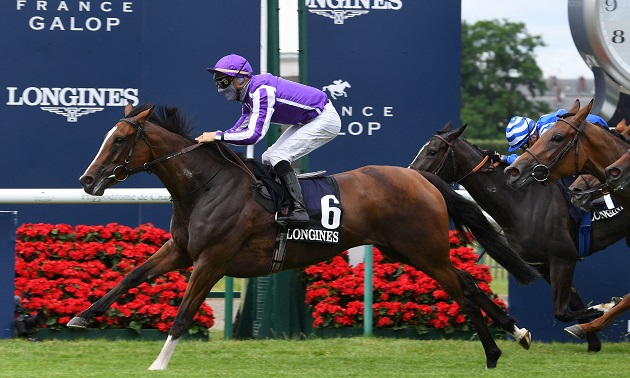 Joan Of Arc repelled the late finish of Philomene to claim the Prix de Diane at Chantilly.

The filly was providing trainer Aidan O’Brien with a third French Classic victory this season, and his first ever in the Prix de Diane, after stablemate St Mark’s Basilica claimed both the French 2000 Guineas and French Derby.

Ioritz Mendizabal was aboard St Mark’s Basilica for those triumphs, and he teamed up to great effect with Joan Of Arc again.

Last seen when beaten a short head in the Irish 1,000 Guineas, Joan Of Arc was prominent throughout in the 10-furlong heat as Rumi and Sibila Spain vied for the early lead.

The latter was in front turning for home, and it briefly looked as though Joan Of Arc might get run out of it, but when she hit top gear she grabbed the lead and set sail for home.

Philomene made late ground from the back of the field, but Joan Of Arc had flown and she hung on by three-quarters of a length at the line.

Aidan O’Brien and Ioritz Mendizabal do it again! Joan Of Arc is a quality winner of the Group 1 Prix de Diane Longines at @fgchantilly... pic.twitter.com/q5rmxa4ifB

“Obviously we’ve tried to win the race lots of times – but it’s a very difficult race to win, very competitive. I’m absolutely over the moon.

“We thought she was very good from her first run in Ireland when she got beat by a very good filly of (son) Donnacha’s – then she won her maiden very easily and she went to a Guineas trial next time, and all the leaders went a little bit too fast, and it didn’t really suit her.

“Her next run after that she won a Group 3 at Leopardstown and was then just beaten in the Guineas.

“That’s why Sue (Magnier, part-owner) named her Joan Of Arc, (because) she was obviously always very special.

“She has progressed with every run – (and) she’s a lovely mind, very well-balanced and a big, long stride.

“When you can ride them that handy and find that much for pressure – as the distance was going on, she was really opening up – she’s really exciting.”

Ladbrokes offer 20-1 about Joan Of Arc for the Prix de l’Arc de Triomphe at ParisLongchamp in the autumn, and O’Brien thinks switching up in distance to 12 furlongs would not be an issue – although he has an embarrassment of riches, with the likes of multiple Group 1 winner Love and Oaks winner Snowfall among others in the middle-distance division.

He added: “Speaking to Ioritz, he was really impressed with her and thought a mile and a half would be no problem. He said she really only got going a furlong out – he was saying she would love stepping up, so I think it (Arc) has to be a big possibility.

“It’s an amazing race, and we’re just very lucky to have some very good three-year-olds at the moment – and Love as well.

“I suppose it’s a good position to be in. We’ll try to space out their races and give them a little rest in between and head that way then for the autumn.”

“We thought both were very high-class two-year-olds.

“Obviously this filly came from the Guineas route – whereas we started Snowfall at a mile and a quarter and then went up to a mile and a half.

“We know Snowfall gets a mile and a half very well, and obviously this filly hasn’t run over it yet – but she has progressed with every run.

O’Brien is delighted to have struck up a fruitful partnership with Mendizabal this term as coronavirus restrictions continue to impact on jockeys’ ability to travel to France.

He said: “We are just so thrilled Ioritz agreed to ride for us, he’s very intelligent, a brilliant horseman and has great experience. We were obviously very confident after speaking to him – he’s a world-class rider, and we’re just so grateful that he agreed to ride our horses. It’s a real privilege.

“When we talk to him we feel so confident. He’s very intelligent – he works out what he wants to do and what could happen, and all the different options.

“We leave it to him really. We feel so privileged that he’s riding for us really. He’s a very special rider, very special.”