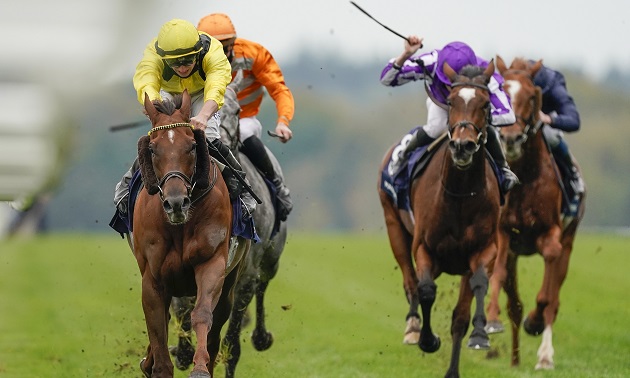 Last year’s winner Addeybb, Derby and King George hero Adayar and the brilliant Mishriff are among 14 confirmations for the Qipco Champion Stakes at Ascot on Saturday.

The William Haggas-trained Addeybb bagged his first Group One victory on home soil in the Champions Day feature 12 months ago, but has made just three appearances since.

The seven-year-old returned to Australia to defend both the Ranvet Stakes at Rosehill and the Queen Elizabeth II Stakes at Randwick, having to make do with the runner-up spot in the former event but successfully defending his QEII crown.

Addeybb made a promising return from a break when splitting St Mark’s Basilica and Mishriff in the Coral-Eclipse at Sandown in early July, but has missed multiple engagements since due to unsuitable ground conditions.

Haggas will be praying for as much as rain as possible ahead of his bid for back-to-back Champion Stakes triumphs this weekend.

The Somerville Lodge handler looks set to launch a three-pronged assault, with Al Aasy and the supplemented Dubai Honour also in the mix.

Connections of Dubai Honour have stumped up the required £75,000 to add him to the field off the back of his impressive display in the Prix Dollar at ParisLongchamp on Arc weekend.

Charlie Appleby confirmed over the weekend that Adayar would be left in the Champion Stakes at the confirmation stage, with a final decision on his participation to be made later in the week.

If the three-year-old does take his chance, he will be turning out just 13 days after finishing fourth in the Prix de l’Arc de Triomphe.

The marginal favourite with most bookmakers is John and Thady Gosden’s Mishriff, who has been saved for this race since his dominant display in the Juddmonte International at York in August.

The Saudi Cup and Dubai Sheema Classic winner had previously finished third in the Eclipse and runner-up to Adayar in the King George.

Aidan O’Brien has left in Love, Bolshoi Ballet and Snowfall, with Jim Bolger’s Mac Swiney and the Noel Meade-trained Helvic Dream the other Irish contenders.