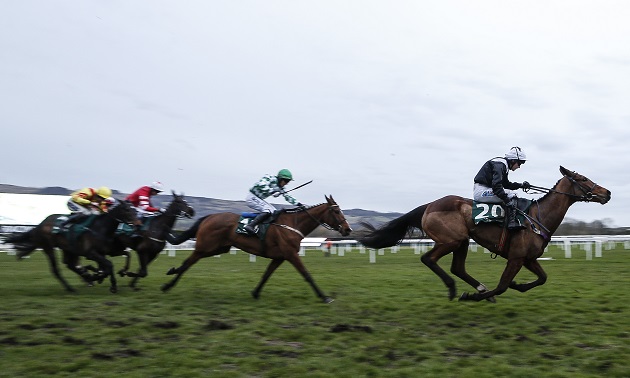 Main Fact bids to extend his remarkable winning sequence to nine in the Betfair Exchange Stayers’ Handicap Hurdle at Haydock.

Since finishing a close-up third on his first start for David Pipe at Exeter in December, the seven-year-old racked up five successive hurdling wins before reverting to the Flat to complete a hat-trick.

He steps up in distance and class for his return to the jumping game in a race his trainer has won three times over the last decade with Grand Crus (2010), Dynaste (2011) and Gevrey Chambertin (2013).

“We’re trying three miles for the first time. He gives the impression he’ll get it – he’s been winning over two miles on the Flat, which usually means they’ll get three miles over hurdles. That is not always the case, but hopefully it will be on this occasion

“This is a good race to go for, and if he gets the trip he has a chance.”

On bidding for a ninth successive win, Pipe added: “I think dad (Martin Pipe) might have won eight in a row with Indian Jockey (in the 1990s) and I remember Marcel winning a lot of races in a row as well.

Ronan McNally is hoping his contender The Jam Man can bag his second major prize in the space of a fortnight, following a wide-margin success in the Troytown Chase at Navan.

Irish amateur Maxine O’Sullivan takes over in the saddle from champion jockey Paul Townend, with McNally keen to find out whether his charge is worth a tilt at Grade One glory in the Marsh Hurdle – better known as the Long Walk – at Ascot on December 19.

“He seems in good form. He had a week off after Navan and has done a couple of light canters this week,” said the Armagh-based trainer.

“It’s always a worry coming back so soon, but the race on Saturday ties in nicely if we want to go to Ascot for the Grade One – I could have waited for a race at Newbury next week or a race the week after back at Navan, but I wanted a month between the two races.

“I suppose the race at Haydock will tell us if we’re even good enough to go to Ascot or not – at least we’ll have a few answers.”

The Jam Man is joined on the trip across the Irish Sea by former Champion Bumper winner Relegate.

Now with Colm Murphy, having previously been trained by Willie Mullins, the seven-year-old blew away any cobwebs when fourth in last month’s Lismullen Hurdle at Navan.

Murphy said: “She seems good. I’m hoping the step back up to three miles should really benefit her.

“It was all happening a bit quick for her at Navan over two and a half miles. I think three miles will be more up her alley.

Olly Murphy relies on the JP McManus-owed Collooney after I K Brunel was withdrawn on account of the ground.

Murphy said: “Collooney is in good form, and we’ve been happy with him since winning at Fontwell last time.

“I think a bit of soft ground and stepping up to three miles will suit, and he has an each-way chance.”