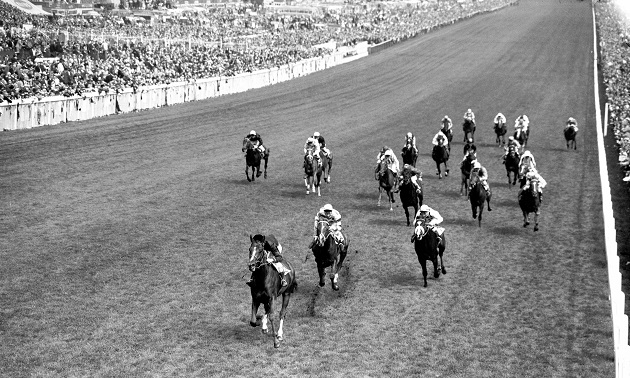 Timeform profile Sea-Bird, who achieved a rating of 145.

Sea-Bird was a tall, well-made colt who developed physically during his three-year-old season. He had not been particularly impressive in appearance when making his only start in Britain in the Derby, but by the time of the Prix de l’Arc de Triomphe in the autumn he had strengthened up and "walked round the paddock with zest, as though keen to get on with the job in hand", according to Racehorses of 1965. His American-bred sire Dan Cupid raced in France, finishing a short-head second in the Prix du Jockey Club, and was trained, like Sea-Bird himself, by Etienne Pollet. Sea-Bird’s dam Sicalade was out of a sister to the 1950 1000 Guineas winner Camaree.

Sea-Bird’s two outstanding performances came in the Derby and Prix de l’Arc de Triomphe. The field for the 1965 Arc was considered at the time to be the best in the race’s history and his victory remains the one which all subsequent winners of Europe’s most prestigious race have been measured against. His rating of 145 made him the highest-rated Flat performer by Timeform until Frankel earned his rating of 147 as a four-year-old in 2012. John Randall and Tony Morris, in their book A Century of Champions covering the best horses of the 20th century, rank Sea-Bird as their ‘Horse of the Century’.

Sea-Bird’s essay in Racehorses of 1965 begins with quotes from several racing professionals, jockeys as well as journalists, on their impressions of his performances. Perhaps the most interesting of those opinions is what Sea-Bird’s own jockey, Pat Glennon, had to say about him – "by far the best horse I have ever seen, let alone ridden" – because it expressed very similar sentiments to Sir Henry Cecil’s summing up of Frankel years later.

As a two-year-old, Sea-Bird had not even been rated the best horse in his own stable. On the last of his three starts that season, he was beaten two lengths by stablemate Grey Dawn in the Grand Criterium at Longchamp. Grey Dawn started favourite for the Grand Criterium, having won the Prix Morny and Prix de la Salamandre, while Sea-Bird had overcome slow starts to win both his first two races over seven furlongs. After a successful debut at Chantilly, he followed up in the Criterium de Maisons-Laffitte with a defeat of the filly Blabla who went on to win the following season’s Prix de Diane and whom he was to beat again in the Arc.

Sea-Bird ended his two-year-old season with a rating of 129 which put him 3 lb behind Grey Dawn on 132. However, he had been given plenty to do in the Grand Criterium by his then jockey Maurice Larraun who was replaced by Glennon the following season. Grey Dawn, who, incidentally, proved bitterly disappointing as a three-year-old, was to be the only horse ever to beat Sea-Bird.

With his new jockey, Sea-Bird had a straightforward task on his first start as a three-year-old in the Prix Greffulhe at Longchamp which he won very easily by three lengths. A month later, in the Prix Lupin, over the same course and distance, he faced stiffer opposition against Cambremont, who had caused an upset by beating Grey Dawn in the French 2000 Guineas, and an unbeaten colt, Diatome, who was to re-oppose Sea-Bird in the Arc. But Sea-Bird joined Diatome in the lead on the bridle inside the final furlong and strode clear to win by six lengths with Cambremont back in third. As a result, Sea-Bird started a hot favourite for the Derby. This was how Racehorses described his impressive victory at Epsom:

"Sea-Bird’s performance at Epsom had to be seen to be believed. He beat his 21 opponents without coming off the bit. It is true that in the last furlong Glennon started to push Sea-Bird, but the horse, having taken the lead on the bit, had the race won, but was threatening to idle and look about him…Sea-Bird responded by going into a four-length lead, and after about a hundred yards was back on the bit. Glennon was pulling him up over the last 20 yards, and Meadow Court, finishing very strongly, was rapidly reducing the gap between himself and Sea-Bird at the post…How far would he have won had he been sent about his business for all he was worth from Tattenham Corner, and kept up to his work the rest of the way home? Of course there was no point in giving the horse a  hard race, when he could just as easily have an easy one…But has there ever been an easier or a more impressive Derby winner?"

Some felt that the ease of Sea-Bird’s win (he had two lengths to spare over Meadow Court) meant that he had beaten a substandard field. But Timeform thought that was unfair on Sea-Bird – "the opposition to Sea-Bird wasn’t bad, it’s just that Sea-Bird made it look bad, the hallmark of a truly great horse!" The Irish-trained runner-up not only won the Irish Derby next time out but followed up by beating the leading four-year-olds Soderini and Oncidium in the King George VI and Queen Elizabeth Stakes.

After a month’s rest after Epsom, it was Sea-Bird’s turn to take on older horses in the Grand Prix de Saint-Cloud. He treated them in the same way he’d beaten his fellow three-year-olds and landed the odds by two and a half lengths, again without coming off the bit.

Sea-Bird’s final test was therefore the Prix de l’Arc de Triomphe. He was one of five Derby winners in an international field of 20. Besides the Irish Derby winner Meadow Court, there was also America’s champion three-year-old Tom Rolfe, the Russian Derby winner Anilin and the unbeaten French colt Reliance who had won the Grand Prix de Paris and Prix Royal-Oak in addition to the French Derby. Diatome, who had chased home Sea-Bird in the Lupin, had also been runner-up to Reliance in both the French Derby and the Grand Prix de Paris. Among the older horses were the pair who had been placed behind Meadow Court in the King George, Oncidium and Soderini, and Sea-Bird’s stable-companion Timmy Lad who had been beaten less than two lengths into fourth in the previous season’s Arc. Sea-Bird was going well in fifth place approaching the home turn when Racehorses takes up the story of the race:

"At that point any one of half a dozen or more could win. Then suddenly, as if by magic, two horses came away from the remainder, one – the winner of the French Derby, the French St Leger and the Grand Prix de Paris, and never beaten in its life before – quite unable to get within challenging distance of the other. And so Sea-Bird won the Prix de l’Arc de Triomphe. The six-length verdict in his favour would have been more had he not drifted across the course in the last furlong. Five lengths behind the runner-up Reliance, Diatome brought home the rest of the field. Tom Rolfe, the best three-year-old in America, finished sixth, 17 lengths behind Sea-Bird; Meadow Court, the pride of Ireland, ninth, 25 lengths behind the winner; and Oncidium and Soderini also ran."

Diatome went on to frank the form by winning the Washington D. C. International from Carvin (eighth in the Arc) later in the autumn, a race that was North America’s most important international contest of the pre-Breeders’ Cup era. Anilin and another of Sea-Bird’s Arc victims Demi Deuil won big races in Europe afterwards, the Preis von Europa and Premio Roma respectively. Sigebert, who wasn’t in the first ten in Sea-Bird’s Arc, finished runner-up in the race 12 months later.

Before 1965 was out Sea-Bird was leased to a syndicate of American breeders for a specified period of five years, reportedly at a cost of £95,000 per annum. Racehorses regretted the fact that he wasn’t being kept in training for another year, and even more so that he was allowed to fall into American hands, as it feared that his move across the Atlantic would prove a permanent one. After a couple of extensions to the original lease, he remained in Kentucky until returning to France in 1972 but died from colic just a year later. Sea-Bird sired one of the best mares in Timeform’s experience, Allez France (rated 136), winner of the 1974 Arc. Other offspring included Little Current, a US champion three-year-old, Arctic Tern, who was champion sire in France (he sired Bering who was the chief rival to another of the great Arc winners, Dancing Brave) and Sea Pigeon, dual winner of the Champion Hurdle.