The Timeform Knowledge: Cognitive Biases and Psychology of Betting 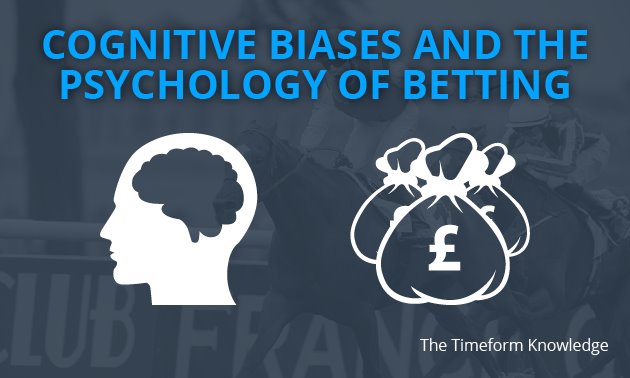 The latest edition of The Timeform Knowledge looks at cognitive biases and the psychology of betting.

All on the Timeform App

It is difficult to be involved in betting for any length of time and to any degree of seriousness without considering the role played in the activity by cognitive biases and psychology.

Unless you hand over all betting responsibility to algorithms and “bots” (robotic software), or to another human – the doing of which involves making a choice in itself – the unavoidable fact is that you will have to make decisions, and those decisions will be influenced by the way in which you think.

The betting edifice is, as we are often reminded, a broad one. It caters for the highly rational and serious to the superstitious and purely recreational. Even highly rational bettors are prone to so-called cognitive biases, or instinctive deviations from rationality: it is part and parcel of being human.

It is possible to train yourself to overcome these biases to a greater or lesser degree, and if you want to be a serious bettor then that is recommended. But perhaps the first step is to understand what those biases are.

The following is a by-no-means-exhaustive list of the cognitive biases and heuristics which tend to affect horseracing bettors more than others. Most of them are recognised in the field of psychology (with thanks to Wikipedia), but some of them have been adapted for this module.

Knowing about cognitive biases, and training yourself to avoid them, or to use them to your advantage, is one thing, but avoiding the psychology of betting more widely is impossible. We are all human and have preferences for security or risk, or capacities for instinctive or rational thought, that are deeply ingrained and specific to us.

When all is said and done, it may well be best to engage with betting in a manner which plays to your existing strengths, rather than to try to change what those strengths are. This is a message that comes through loud and clear from many successful bettors.

If you are the sort of person who requires regular positive reinforcement, then backing 33/1 shots once or twice a week may not be for you if you want to avoid becoming a nervous wreck.

On the other hand, if you have the sort of temperament and self-belief which are not rattled by long losing runs then you may find you are well suited to siding with horses at big odds that others tend to ignore and/or misprice.

Working outside your psychological comfort zone may well result in you making bad decisions when things do not go well, or even when they go too well. To err is human. But erring is likely to happen less if you are in control and feel comfortable with what it is you are doing.

“Cognitive Biases and the Psychology of Betting” could easily run to tens of thousands of words, and the above is intended only to whet the appetite for what is a fascinating subject. Anyone wishing to learn more about cognition in general could do a lot worse than read “Thinking, Fast and Slow”, by Nobel Prize winner Daniel Kahneman.