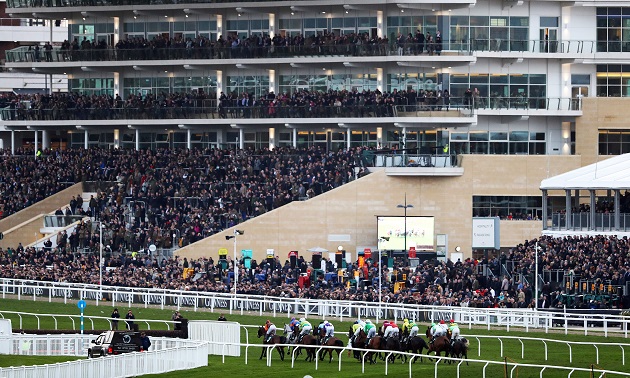 One or two mentioned below will be of interest for the first two of those races, if probably not the last-named, but who knows what those horses’ states of readiness will be in November and December?

The “all-roads-lead-to-Cheltenham” narrative, which sometimes works to the detriment of the jumps season overall, is something of a God-send for anyone trying long-range forecasting. If your horse is Cheltenham standard it is likely to turn up at Prestbury Park in March. Though not always in the “right” race!

My brief also includes “…using sectionals, striding, or any other data that makes your selections particularly interesting…” Just try to stop me! Sectional timing, especially, is under-used in jumps racing more widely.

Even when it does not turn up a star that might otherwise be imagined to be an unexceptional performer – the kind of payoff that makes all the hard work worth it – sectionals identify whether races have played to stamina rather than speed, or to those that raced prominently rather than those that raced behind, and as such are invaluable to all analysis.

Timeform uses sectionals in all its race-reading and handicapping as a matter of course: it is not apparent that others do.

However good, or not, your analysis is, you still need to try to see into the future where ante-post betting is concerned. Big prices may be secured a few months in advance, but they are big prices for a reason!

I came up with the following five recommendations, along with some words of explanation.

The question is “is Allaho good enough, and is he a Ryanair Chase horse?” I think the answer to both is “yes”. His wide-margin win, in a fast time and with impressive sectionals, in a two-mile-five-furlong beginners' chase at Fairyhouse in February looks even better now than it did at the time (runner-up Milan Native is a solid mid-140s performer) and came on just his second chase start.

Allaho came up just short against Champ and Minella Indo in a well-run RSA Chase at the Festival on start number three, still running to a 160 Timeform rating that is par for a third-place finish in the Ryanair itself.

Connections may try to turn him into a Cheltenham Gold Cup horse, but his splits and run style to date are those of a two-and-a-half-mile to three-mile performer, not an out-and-out stayer. They may find that out along the way, perhaps even in a King George Chase, for which he would also be an interesting contender if conditions rewarded speed more than stamina.

The Champion Chase looks ripe for a changing of the guard, with last season’s winner Politologue rising 10 and the legendary Altior turning 11 at the end of the year. The talented ante-post favourite Chacun Pour Soi has not been seen since February, either.

Putting forward Greaneteen at a big price may seem a bit of a stretch given that his own Festival appearance in March saw him finishing only fourth in the Grand Annual Handicap. But there were excuses that day – he got stopped in his run and finished well – and it still represented one of the best two-mile novice chasing performances of the campaign on what was just Greaneteen’s fourth run over larger obstacles.

The previous three were all wins, including a fast-time one in an open handicap at Musselburgh, and Greaneteen has a hill rather than a mountain to climb to prove himself a bona-fide Champion Chase contender. A win in a valuable handicap in the shorter-term looks eminently feasible (he has a BHA mark of 151) and could tee him up nicely for a crack at the big time.

Willie Mullins unleashed something special at Clonmel in January, when Lord Royal landed a two-and-a-half-mile maiden hurdle by 33 lengths. It was not just the margin of victory, over admittedly ordinary opposition, which impressed, but the overall time – much quicker than the other two hurdles at the distance on the card – and Lord Royal’s splits and striding.

He was around 32 lb faster overall than 131-rated Tiger Tap Tap and around a dozen lengths quicker in the final quarter of a mile, also. At the same time, he showed a remarkably relaxed and long stride, the kind that tends to be associated with horses who conserve their energy at marathon distances.

Lord Royal’s cadence dropped to 1.83 strides/second at one stage – about as low as jumpers go unless exhausted (which he certainly was not!) – but picked up to a still leisurely 2.00 strides/second as he charged merrily away from labouring rivals in the home straight. It follows that Lord Royal must have a stride of ground-devouring length to run as quickly as he did while turning over so slowly.

Unfortunately, he did not read the script next time – when turned over at odds on by the useful, and far more experienced, Run Wild Fred – but remained a possible for the Ballymore or Albert Bartlett at the Cheltenham Festival until late on, with his stable making it clear that they regarded him highly.

It is a very long way to go from defeat in a novice hurdle to success in a Stayers’ Hurdle, but the latter race is going through a somewhat fallow period (average winner’s rating in last four years of just 156) and we all have to start somewhere. Lord Royal is a monster price: it is up to him to prove himself the monster racehorse he hinted at that day at Clonmel.

No horse aged 10 or over has won the Cheltenham Gold Cup this century, so sectionals pin-up Santini may realistically have only one more shot at the big one for which he has long seemed tailor-made. It is worth remembering, however, that he has surprisingly few miles on the clock for an eight-year-old, having run just 10 times in all and six over fences. He has not exactly had an excess of opportunity so far.

Those sectionals – usually fast at the business end but not always along the way – identified Santini as a thorough stayer from an early stage. It was, therefore, “unfortunate” that the latest Cheltenham Gold Cup proved to be a tactical contest and something of a dash to the line (108% finishing speed in final half-mile).

Santini stayed on, as Santini does, but was still a neck down on Al Boum Photo at the line. The Timeform timefigure of the first two was just 137, reinforcing the impression that this was a test of speed more than stamina as Cheltenham Gold Cups go.

Santini had won both his starts earlier in the campaign, though much more impressive when disposing of Bristol de Mai in a truer-run Cotswold Chase at the same venue than when edging out Now McGinty at Sandown. Cheekpieces were applied for the first time in the Cheltenham Gold Cup, but what he needed more than an aid to concentration was a greater test of stamina. Keep the faith.

The average Timeform rating of the winner of the Mares’ Novices' Hurdle at the Cheltenham Festival – in the race itself, since its inception in 2016 – is 142 and Shewearsitwell has already surpassed that and we are not even in November.

She won a bumper at Galway in July and a mares’ maiden hurdle at Sligo in August, but it was start number three of three which should have made everyone sit up and take notice.

Faced by five rivals, all but one of which was rated higher than her (including 137-rated Goodbye Someday, who ended up finishing second), she trounced them and did it in easily the fastest of three races at two miles over hurdles on the card, one of which was won by the Champion Hurdle contender Saint Roi.

The sectionals below (for the winners themselves) show that the times were very similar from three out to the line, but that Shewearsitwell had done a lot more running prior to that point, being around half a furlong ahead at that stage. 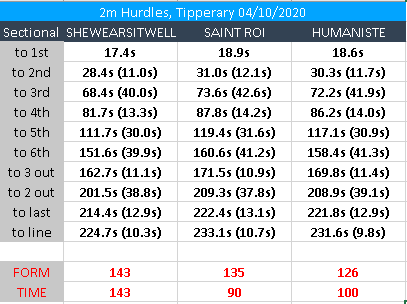 Shewearsitwell is not just an early-season flat-track bully, but a potential star. Indeed, one danger is that she will prove so good that she will tackle an even bigger task come March. It is a risk worth taking: remember that Mullins has won every running of the Mares’ Novices' Hurdle so far.

I will be donating the returns from a £10 bet on each of the selections, at the odds advertised, to Racing Welfare: let’s hope there is something to show at the end of it!