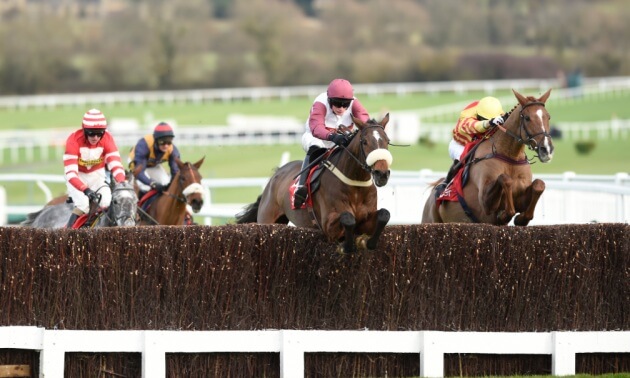 Simon Rowlands advises an each-way bet in the Paddy Power Gold Cup at Cheltenham on Saturday.

To some, who may be nearer the front of the queue if/when a vaccine arrives, it will forever be “the Mackeson”. For others, it may be “the Murphy’s” or the “Thomas Pink”. But, for a newer generation, the first major handicap chase of the season at Cheltenham is “the Paddy Power”, and, despite a brief period in which another bookmaking sponsor stepped in, that is what it will be again in 2020.

While thanks go to the sponsor, of course, the aim from this point should be to try to pull down their bright green pants.

I am not sure I will manage to accomplish that, but I am here to give you some facts, figures and trends to make the task easier (hopefully).

Exhibit A needs to be the shape of the race from a betting point of view. A total of 17 declared runners mean four places at a quarter of the win odds, and possibly better even than that if you shop around.

Such races are highly appealing to the committed each-way punter. I made the early win book on the Paddy Power about 125% (that is, you would need to stake a total of £125 in proportion to each horse’s odds to guarantee a return of £100 whatever the result), but the per-place book is just 96%.

You split the difference – 110% – to get the each-way figure. It is better to back each way than win only on the race, all other things being equal.

Then there are the key trends, taken from the last 10 editions of this well-established contest.

The following identifies the number of qualifiers in each category (“count”), their total wins and places, their win and place impact values (factor by which they have won or placed compared to chance, with 1.00 being par), the % return on investment for a level-stake each-way bet on each qualifier, and, most importantly, the % of rivals beaten for each cohort. 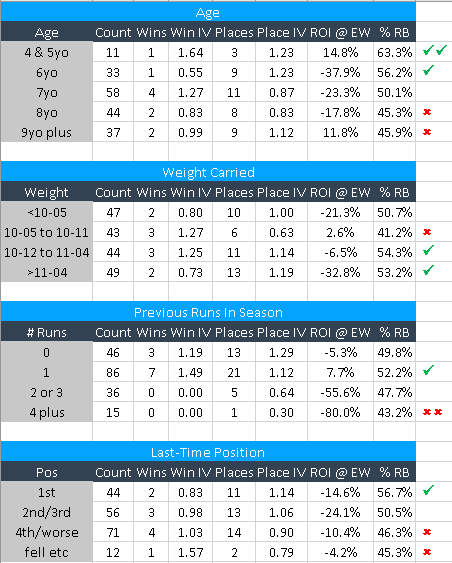 Younger has been better, especially in terms of %RB, and just one five-year-old (Saint Sonnet) and one six-year-old (Mister Fisher) have been declared. Unfortunately, those two, along with Simply The Betts, are easily shortest-priced in the field.

A higher weight has tended to be better, though that has not translated into a profitable betting strategy. Once-raced or unraced in the season in question has been advantageous, but that accounts for nearly all those declared this year.

Those figures for last-time position are about what you would expect in this context – last-time winners outperform last-time placeds, who in turn outperform what is left, but not massively so – and show no edge in terms of profitability.

I expected to be tipping that sole five-year-old Saint Sonnet at this point, and reckon he should just about be favourite, as indeed he is. But his credentials are persuasive rather than compelling, and they need to be the latter to justify a punt given his odds.

A smart jumper at his best in France, though more often a rung or two below that, Saint Sonnet won a decent novice chase at Catterick and came seventh to Samcro in the Marsh Novices’ Chase at the Cheltenham Festival in two starts in this country. That was a tidy beginning, but Saint Sonnet is going to have to be better than that to win a race like this off a BHA mark of 147.

Stats and trends can tell you plenty, such as about underlying biases which need to be taken into account, but ultimately the thing that matters above all others is whether a horse appears to be overpriced.

Saint Sonnet may be, a little, but COOLE CODY appears to be more so. The latter does not “fit the trends” in that he is a lightly-weighted nine-year-old, but he has a fair bit going for him otherwise.

Coole Cody has taken well to fences this term, following an abortive attempt in the past, winning at Newton Abbot before finishing second to Soldier of Love back there then to Southfield Stone at this course, beaten only around two lengths both times.

Given those two are officially rated 144 and 146 respectively, Coole Cody could have been dealt with more harshly than a BHA mark of 137. Timeform’s esteemed handicapper gives Coole Cody a leading chance.

If you are in any doubt as to Coole Cody’s raw ability, it can be pointed out that he won off 136 and finished second off 137 over hurdles earlier in his career. While chasers tend to lose their edge around the age Coole Cody is at now, we have recent evidence that that is not the case with him.

In an open contest, Coole Cody looks worth a small each-way punt at an attractive price.