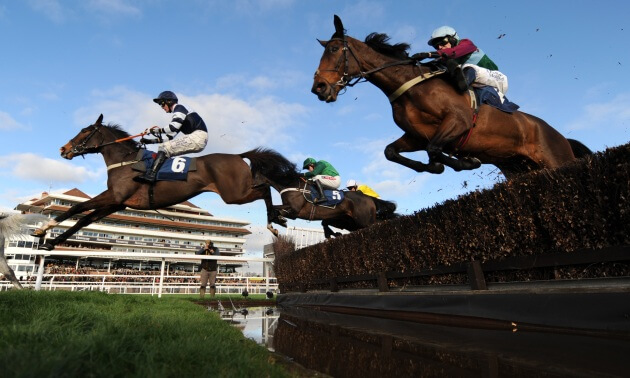 Simon Rowlands advised Paddy Power Gold Cup winner Coole Cody at 20/1 and he has identified two horses worth backing each-way in the Ladbrokes Trophy at Newbury on Saturday.

“Following the evidence” may not be universally popular in this age, but punters who ignore evidence are likely to come unstuck in a more painful way than those in wider society who hold forth about stuff without any skin in the game.

The problem is that there can be a lot of evidence and many ways in which to interpret it. Ultimately, where betting on horseracing is concerned, the most important part of the process is to convert the lessons of the evidence into the probabilities of individual horses winning.

Coole Cody – put up at 20/1 on here a fortnight ago – was not a good “fit” on the trends for the Paddy Power Gold Cup in some respects, but he was overpriced for a horse who was top-rated on Timeform and with strong recent claims on form. It is important not to lose sight of the goal.

Where the Ladbrokes Trophy (15:00) at Newbury on Saturday is concerned, we have plenty of trends to consider from the last decade of one of jump racing’s flagship handicaps, known as the Hennessy Gold Cup until after 2016.

The following are the pick of them, measured by the number of horses in each category (“count”), their total wins and places, the impact values of those wins and places (factor by which they have won or placed compared to chance), the % return on investment for level-stake each-way bets, and the all-important % of rivals beaten.

The last-named considers the detailed finishing position of qualifiers in each of the categories rather than simply whether they won (or placed) or not and has become accepted as a significant measure in horseracing analysis, especially when dealing with smaller samples. 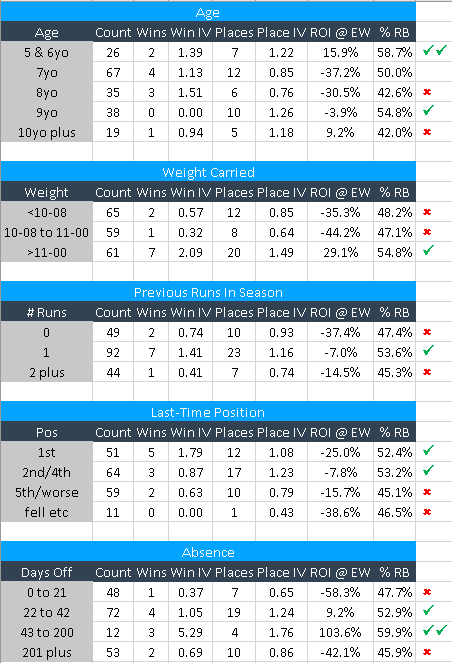 Interestingly, the top scorers in terms of % RB – five- and six-year-olds and horses returning from an absence of between 43 and 200 days – have just one qualifier each on Saturday: Copperhead and Secret Investor respectively.

Both categories have positive win and place impact values, and a positive each-way return for the 10 years under scrutiny. Indeed, horses running in the Ladbrokes Trophy off a 43-day to 200-day absence have won more than five times as often as could be expected by chance – a remarkable return – and more than doubled that each-way investment.

Both those horses mentioned also figure in the positive “carrying more than 11-00” category, incidentally.

Secret Investor is a last-time winner, and is high on Timeform weight-adjusted ratings, but Copperhead was pulled up on his return – albeit in a hurdle – and has a bit more to prove in the here and now.

That win for Secret Investor came at Chepstow by seven lengths from Potterman (who has franked the form and reopposes on better terms here) and came during a purple patch for trainer Paul Nicholls that has shown little sign of ending. Secret Investor stays well, at least when conditions are not testing, as here, and has the right sort of mix of experience and a bit of potential still.

While Copperhead must bounce back from his own return, he has plenty to recommend him otherwise. In particular, he looked a proper staying chaser in the making when winning well at this course and distance over Christmas then following up in the prestigious Reynoldstown Chase at Ascot by 17 lengths.

The latter performance ensured that Copperhead went off at just 6/1 for the RSA Chase at the Cheltenham Festival, a race ultimately fought out by horses rated well into the 160s, but Copperhead seemed not to have recovered from his Ascot exertions and was well held when falling.

The crucial thing about the Reynoldstown Chase is that it represented a thorough test of stamina due to not just heavy going but a relentless pace. Copperhead kept galloping while others caved in, and a similar pace scenario is at least possible on Saturday: no less than half the field of 18 have Timeform Early Position Figures of 2.2 or lower, indicating front-running or pressing tendencies.

If you are looking for something to keep grinding away when others have cried “enough!”, then Copperhead is your man, or at least the Copperhead we saw at Ascot is. He ended up beating Two For Gold and Danny Whizzbang that day and is weighted to confirm the form on revised terms.

Almost as important as making your selection(s) is optimising how you back it. Where the Ladbrokes Trophy is concerned, an 18-runner handicap is mathematically better tackled each-way than win only.

The best prices on Oddschecker at the time of writing give a 127% win book (you would need to stake a total of £127 in proportion to each horse’s odds to guarantee a return of £100 whichever one won) but just a 100% per-place book. Each-way splits the difference.

That is at the regular terms of one quarter the win odds for the first four places, but it may be possible to improve on even those if you shop around.

The recommendation is, therefore, to side with Copperhead – who has youth and weight carried on his side – and Secret Investor – who has weight carried and an ideal preparation to his name – each way to small stakes. Best of luck!