It can be questioned just how competitive a major handicap is when a third of the declared field were pulled up last time and 60% were either pulled up or unplaced on their most recent starts. That is the scenario with the Classic Handicap Chase at Warwick at 3:00 this Saturday.

It has £75,000 in added prize money, and was won by the same year’s Grand National hero One For Arthur as recently as 2017, but this may not prove to be the most competitive of renewals, for all that 15 declared runners is a number that has been surpassed only once in the last decade.

That number does, however, mean that the race is not a particularly good each-way proposition, unless you can secure enhanced place terms. Win only, if necessary on more than one selection, is a better way to go mathematically.

We can look at some “trends” from the last decade, with, as usual, place impact values and % of rivals beaten the most telling measures. 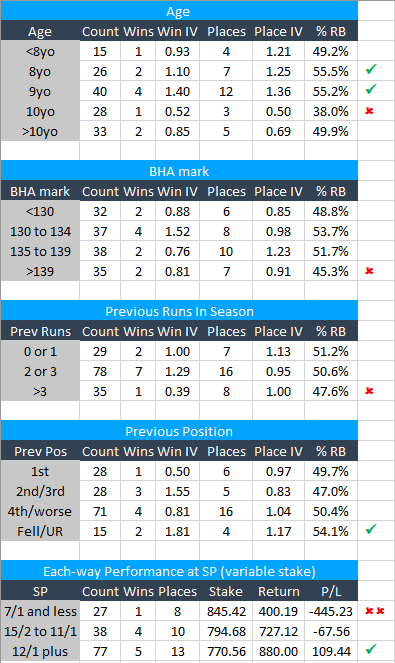 Hopefully most of that is self-explanatory by now. Eight-year-olds and nine-year-olds have fared best, with 10-year-olds oddly poor, while horses running off higher handicap marks and having been in action more than three times in the season in question have underperformed slightly.

There are no last-time fallers/unseated in Saturday’s race, so those figures merely show that there is not the expected advantage to having finished close-up on the most recent start: as we have seen, plenty on Saturday will not have.

Those “performance at industry Starting Price” figures are more intriguing. While a win bet, or win bets, is preferred over an each-way one in this instance, each-way performance is a better way of measuring these things historically than wins only, due to the more inclusive sample size.

Another salient feature of Saturday’s race is that there seems likely to be an honest pace at this marathon trip of 3m 5f and 54y, with Milansbar (the winner in 2018), Goodnight Charlie, Darlac and Rocky’s Treasure all often to be seen at or near the head of affairs.

Stamina as well as sound jumping (Warwick has the closest cluster of four fences, immediately prior to the home straight, of any course in Britain) should be at a premium.

There are also a surprising number of out-of-form trainers (as measured by % of rivals beaten in handicaps since November) to go with the out-of-form horses. The notable exceptions are Fergal O’Brien (66.7%, Petite Power) and Caroline Bailey (64.5%, Crosspark).

As it happens, those two horses are at the top of my shortlist despite not “fitting the trends” in some respects, including age.

The fact that Petite Power is an 11-year-old in a race that has slightly favoured horses younger than that should be weighed against the fact that he, like his trainer, is in the form of his life. He has won at Cheltenham and Uttoxeter, and finished second at Exeter, in his three appearances this term.

That Exeter run, in which he was beaten a neck by Belle Empress, the pair well clear, confirmed that Petite Power thrives at marathon distances and gets on well with Mr Liam Harrison claiming 7 lb. A 6-lb rise is not lenient, but the winner has run creditably (despite things not going her way) off 7 higher since. Petite Power probably deserves to be a few points shorter in the betting than he is.

You need a leap of faith that Crosspark will return to his best, given that he has beaten only one rival in his last two starts, but not a massive one when you consider that he finished third in this race 12 months ago on the back of an unplaced effort, then won the Eider Chase at Newcastle and came second in the Scottish Grand National at Ayr.

Those last two efforts give Crosspark a good chance here, under conditions which suit him and from a stable going well. We have seen that a poor last-time effort and a larger Starting Price has been no barrier to performing well in this across the years.

The Conditional – in good form but possibly not the dyed-in-the-wool stayer that will be needed here – Kimberlite Candy and Le Breuil all have it in them to go close but are at significantly shorter odds. The last two finished second and a promising seventh in the Becher Chase at Aintree last time, but form there is not always reproduced elsewhere. 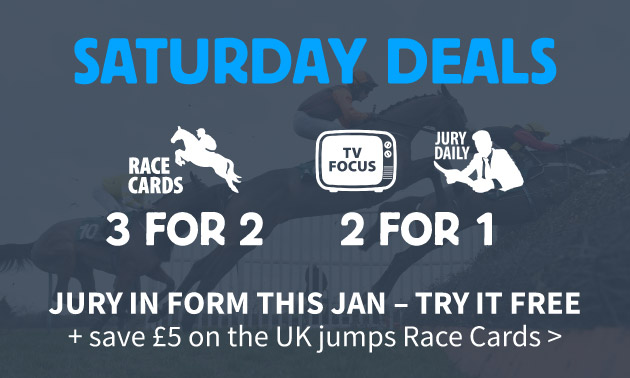