You will come across bigger races in the jumps calendar than the valuable two-and-a-half-mile handicap chase at Cheltenham’s December Meeting, but not many whose winners include quite so many bold-jumping legends of the game.

This year’s contest – due off at 1:50 on Saturday – is close to par in terms of race strength, with the BHA marks ranging from 157 to 138 (if you ignore two reserves), though a likely field of 17 will be deeper than usual: a maximum of 16 have taken part (on three occasions) in the last decade.

That will be important where betting tactics are concerned, for 17-runner handicaps – in which a minimum of four places are on offer – are mathematically tilted in favour of the each-way rather than win-only punter.

Another major consideration are the prevailing conditions. While the ground is forecast to be “good to soft”, rain could make it more testing than that, and in any case the indications are that the pace will play to stamina over speed. No less than seven of the 17 have consolidated Timeform Early Position Figures of 2.2 or lower, indicating front-runners or pressers.

With such a long-established contest of standing, “trends” are likely to have more significance than with an ordinary race or one without much of a history. This is what some of the key trends from the last decade indicate: 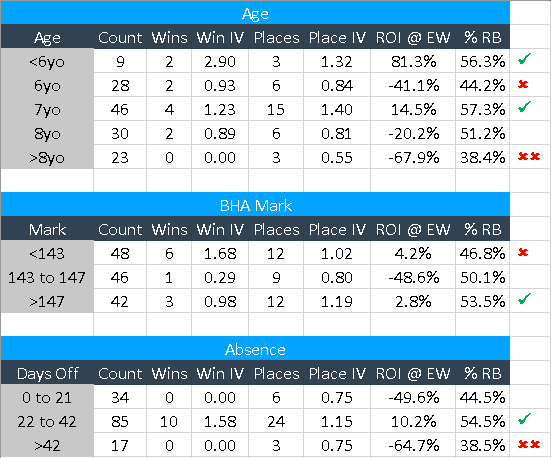 Saint Sonnet is the only horse aged under six, a group that has beaten 56.3% of its rivals (where 50% is par) and shown an 81.3% profit on level each-way stakes over the years. Seven-year-olds, of which there are four (plus one of the reserves) in Saturday’s field, have fared nearly as well, but horses older than eight have a notably poor record.

Horses higher up the handicap have done better than those that were not, but not to a huge degree. An absence of more than six weeks can be considered a negative, as, more surprisingly, can a last-time win. Horses that finished second to fourth on their most recent starts have provided 18 of the 33 places in the Caspian Caviar over the last decade.

Unsurprisingly, if reassuringly, horses within 2 lb of top-rated on Timeform’s weight-adjusted ratings have fared well, including in terms of each-way returns, while those more than 6 lb off top have performed miserably.

Each of the runners has pros and cons, as is the way of these things, but one stands out as having a fair few more of the former than the latter, and that is Al Dancer.

He is a seven-year-old, near the top of the handicap but feasibly treated following a creditable, rather than outstanding, performance last time, which came exactly four weeks ago.

That last run was in this race’s close cousin, the Paddy Power Gold Cup at this course, in which Al Dancer was a keeping-on third to Coole Cody in a race run in a similar fashion to what seems likely with this one. Al Dancer is 6 lb better off with his old rival for four and a quarter lengths: Saint Sonnet was beaten when falling that day.

Before that, Al Dancer turned in a performance that might make him even better handicapped, in that he gave weight and a beating to Master Tommytucker in an intermediate chase at Newton Abbot that produced a good timefigure. Master Tommytucker is top weight in this, having won well at Huntingdon and Haydock since.

Al Dancer is a consistent sort, unplaced only twice – both at two miles in the crucible of the Cheltenham Festival – in a career that has taken in successes in a bumper, over hurdles and over fences. He has yet to fall over larger obstacles, or to make much in the way of errors.

This is a good race for each-way betting – as mentioned, and if there is no more than one withdrawal – with the win book at best Oddschecker odds at the time of writing being 127% but the per-place book being only 100%.

The recommendation is to back Al Dancer in that manner. He not only ticks a good few of the trends boxes, he has been there, done that and got the t-shirt in a race of this nature. Just a little more is required to see him going very close in this one.