Back in the distant past when I managed a betting shop there used to be a feature in the racing newspaper of the time titled “Mind Your Horses” that spelt out which of the day’s runners were similar enough in name to spark possible confusion.

Somewhat against the intended spirit of the piece, one of my regulars hunted it down each day and studiously added the names of the horses contained therein to a betting slip in such a badly written and ambiguous way that he clearly hoped to cop whichever of the beasts obliged.

He probably became a millionaire with the subsequent rise of the Al-Maktoum fortunes – “Moha” this, “Moha” that – and the proliferation of Doctor Marwan Koukash’s army of “Gabriels”.

“Mind Your Races”, unlike me, then. Both sponsorships are very welcome, but this preview will look at the £100,000 Ascot version and not the £16,000 Haydock one. Fortunately, I can see little other potential for misunderstanding.

The former contest has been a feature of the pre-Christmas fare at this course since 2001, bar a couple of early renewals at Sandown in January, and this year’s renewal is bang up to scratch in terms of the quality and quantity that has been attracted.

Such a well-established race of standing enables us to look at the trends over the last 10 runnings, the 2009 and 2010 fixtures having been cancelled due to snow and the 2015 one resulting in a dead-heat.

The measures used are “count” of qualifying runners, win and place successes, win and place impact values (the factor by which this occurred compared to chance), % return on investment for level-stake each-way bets, and most importantly of all % of rivals beaten. 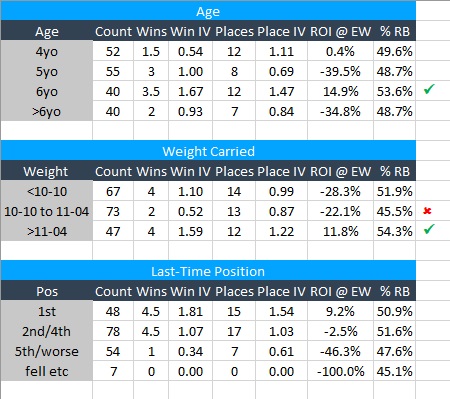 There is less to see here than usual, but still some items of interest. The usual bias to younger horses has not materialized, with six-year-olds winning and placing around one and a half times as often as by chance, being slightly positive in terms of %RB and showing a profit to each-way punters (no mean feat given a 16% expected loss overall).

Higher-weighted horses have performed well, if not to a huge degree, there is little in last-time finishing position (though a first-four placing is more profitable than not), and precisely two previous runs in the season under review has outperformed other categories.

There are only five out of 17 of the “right” age and just three of those up near the top of the weights – Buzz, Master Debonair and Kid Commando – but I am going to bend the rules to allow MALAYA in also, despite her strictly failing on the latter score by a couple of pounds.

Whatever you think of Kid Commando – and I think quite highly of him – you are likely to think at least similarly about Malaya.

The pair met at this course in October, when Kid Commando stormed to victory by four and three quarter lengths from Malaya, with the rest well beaten off. It resulted in a fast timefigure – theirs are the best two in Saturday’s race – and the form has far more substance than some of the subsequent efforts of those that contested the race might suggest.

One of those is Kid Commando himself, who might not have been suited by going up in trip at Haydock next time. That said, he will have a job on dominating to the same degree in this much bigger field, and he also meets Malaya on 6 lb worse terms.

Kid Commando’s trainer, Anthony Honeyball, was going great guns back then, but is less so now; Malaya’s trainer, Paul Nicholls, continues to bang in the winners.

While the prospect of plenty of pace (Timeform forecast “very strong”) on Saturday could count against Kid Commando, it looks ideal for Malaya, whose biggest win came in a thoroughly-run Imperial Cup on soft ground at Sandown last year. She is usually played late and wears a tongue tie for the first time here.

There is plenty to recommend some of the others, of course, though Buzz is a short price for one who has gone up 11 lb in the handicap, and Benson is likewise for winning a weaker race last time.

Malaya’s price is decent, rather than better, but she does look very likely to run her race and be there or thereabouts. As usual with 17-runner handicaps, it is better mathematically to back each-way than win-only, and Malaya looks the right sort for that approach, also.

Shop around on Oddschecker and you may get some even better place terms than the standard ones.