Rowleyfile Investigates: The State of the Surface at Chelmsford City Racecourse 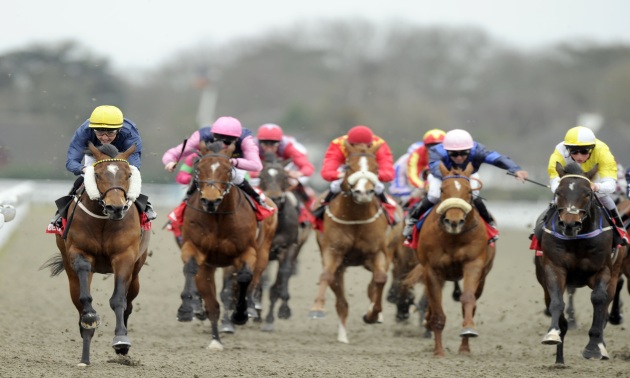 In his latest investigation, Simon Rowlands looks at the real state of the going at Chelmsford City Racecourse.

The meeting on September 3 was the quickest surface so far at Chelmsford, and in time terms it was fully 72 lb quicker than the slowest. In other terms, 72 lb is equivalent to the difference between “firm” going and “good to soft (tending towards soft)” on turf.

The racecourse that is located somewhere near Braintree in Essex – whether referred to as Great Leighs, as it was originally, or Chelmsford City, as it is now – has seldom been long out of the news.

The course’s reincarnation under the latter name in January was accompanied by much fighting talk from the management about how they intended to make it into an all-weather track of international standing.

But it was back in the news recently for a different reason, with trainer Hughie Morrison criticising unchanging descriptions of the surface there as “standard”.

Morrison is justified in his remarks, as will be shown. But such a spat would not normally be the sort of thing Timeform picked up on were it not for the fact that it shines a light more widely on some dubious practices where official descriptions of racing surfaces are concerned.

You do not need to be especially preoccupied with the going to believe that it should be described accurately in British racing.

The speed of a surface can be inferred from the times taken by horses to run over it. This is not a straightforward procedure, but a simplification of it was given in the recent “Analysis of Overall Times” module of the Timeform Knowledge. That procedure is assisted further by wind and sectional analysis, which Timeform undertakes at Chelmsford and many other courses.

As mentioned in that module, a resulting going allowance can be expressed as the Timeform rating which a horse would have to run to in order to equal Timeform standard time carrying weight-for-age in a truly-run race. As such, a lower figure indicates a firmer surface.

The figures for Chelmsford since its reopening in January of this year are as follows: 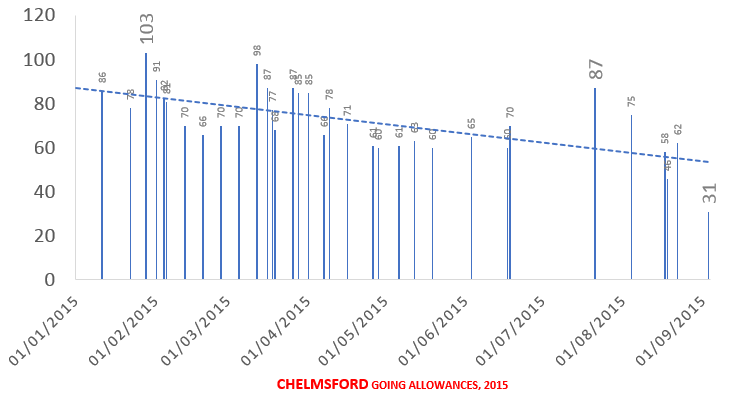 The vertical bars, arranged by date, are accompanied by those going-allowance figures, and the dotted line is a crude “best-fit” trend.

Over time, the surface at Chelmsford has speeded up: where once (early in this year) figures in the 80s were common, now they are rare.

The most relevant section of the graph to consider is the far right. The surface was rewaxed after June and was slower than it had been for the first two subsequent meetings (figures of 87 and 75).

The latter meeting was the one which prompted Morrison’s comments, and the evidence supports him emphatically. This was the quickest surface so far at Chelmsford, and in time terms it was fully 72 lb quicker than the slowest, which took place on January 28.

So, Chelmsford are describing the speed of their racing surface incorrectly, what of it? It is not as if they are alone in this, though the latest evidence suggests they may be among the worst offenders.

What might be considered to be even more worrying were the comments from Chelmsford’s Clerk of The Course which implied he took the word of jockeys over the incontrovertible evidence that exists elsewhere. Jockeys have many skills, but they cannot judge precisely the speed of a surface while on horseback: we have stopwatches and carefully surveyed distances to achieve that.

What was also worrying is that the BHA “considered the explanation” of the Clerk in question and chose to take no action. It is very difficult to imagine they could possibly have done so had they considered – and understood – the evidence.

The BHA’s inaction, or possibly incomprehension, may be the most disturbing aspect of all. In a sport which depends so much on the accuracy of data, who is ensuring standards are up to scratch in this area?