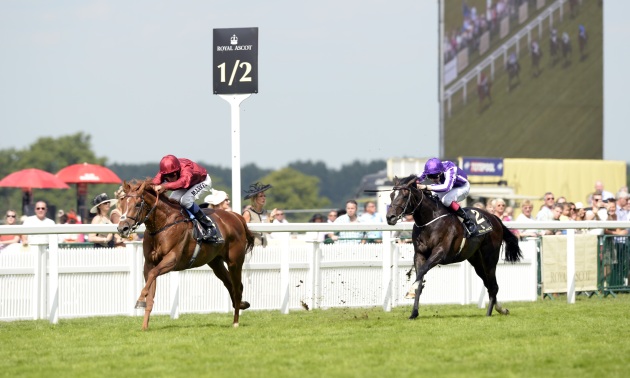 Ben Fearnley runs through the latest Timeform ratings after a busy week of Flat action from Chantilly, Sandown, Haydock and Naas.

Though the week before the Epsom Derby is traditionally a lower-key one in the British Flat racing calendar, the Group 1 Prix d’Ispahan – staged at Chantilly this year rather than Longchamp – provided some top-class European action to fill the Group 1 void.

The Prix d’Ispahan looked a strong race on paper. Last year’s top French three-year-old New Bay was making his reappearance against Prix Ganay one-two Dariyan and Silverwave, with the likes of Gordon Richards winner My Dream Boat also in the mix. The unknown quantity in the race was Japanese raider A Shin Hikari, who was last seen winning the Hong Kong Cup in December, and he put up one of the performances of the season so far to run out a wide-margin winner (though the winning margin looked more like seven than the official 10).

A Shin Hikari is now rated 133 (3 lb higher than Europe’s top rated horse, Postponed), making him the one to beat in the Prince of Wales’s Stakes at Royal Ascot, which is his next target. With New Bay (128) being well below form on what was his reappearance, A Shin Hikari’s biggest danger at Royal Ascot could be Time Test, who is also rated 128 following his high-class win in the Brigadier Gerard at Sandown on Thursday under a 5 lb penalty. Time Test has looked capable of making a mark at Group 1 level in the past, not least when impressively landing the Tercentenary Stakes at last year’s Royal meeting, and he’s well worth his place in the Prince of Wales’s in just under two weeks’ time, though if A Shin Hikari is able to run to the same level as he did at Chantilly, Time Test will have a bit to find.

Sandown’s evening card also had other Royal Ascot clues on offer, with a strong renewal of the National Stakes won by Ed Dunlop’s Global Applause (now rated 104p), who looks set to play a big role in the Norfolk, while Mehmas (105p) – who wasn’t seen to best effect having had to wait for a gap at a crucial stage – will be suited by a return to six furlongs and has a good chance in the Coventry Stakes.

Pallasator (120 from 115) produced a career-best in the Henry II Stakes under a change of tactics (held up) and is sure to be involved in the big staying races once again this season, though his temperament in the preliminaries will be tested more rigorously in the Ascot Gold Cup than it was at Sandown. Max Dynamite (124) was below form on his return to action (last seen finishing second in the Melbourne Cup) but should leave the form behind at Ascot provided his stamina holds. It is worth noting that both have something to find on Timeform ratings with Order of St George, who tops the Gold Cup ratings on 129, who could make his return in the listed Savel Beg Stakes at Leopardstown on Friday.

Home of The Brave (121+) won a deep renewal of the Timeform Jury Stakes at Haydock on Saturday, not needing to improve to get the better of Convey (now 120 from 117p) by a neck but showing a really good attitude having been in the firing line throughout. There is hope – now that he is more mature and less headstrong – that Home of The Brave will see out a mile better in due course, and with his obvious speed it is no surprise to hear connections mention some overseas (particularly Breeders’ Cup) targets for later in the season.

We may not see Home of The Brave at Ascot next month but we may well see Sandy Lane winner Quiet Reflection, who put up a performance (now rated 122) which potentially marks her down as the best three-year-old sprinter in Britain at the moment (of either sex), and has her clear of the likes of Log Out Island (120) and Acapulco (118) at the head of the Commonwealth Cup entries.

Meanwhile on the Haydock card, Journey (118) did not have to be at her best to land the Pinnacle Stakes. She remains one of the best middle-distance fillies around and will likely take plenty of beating wherever she goes next, while Out And About (108p) was an impressive winner of the final handicap on the card and, given he’s bred to stay at least a mile, could be one for the Britannia Handicap at Royal Ascot.

Aidan O’Brien readied some of his two-year-old team for Royal Ascot at Naas on Sunday. Cuff (102p) is now favourite for the Albany after a smooth listed success at Naas and is clear of Wesley Ward’s second favourite Create A Dream (90p) on Timeform ratings, though the latter has had just one start. Peace Envoy (102p) also won a listed race and will reportedly run over five or six furlongs at the Royal meeting.