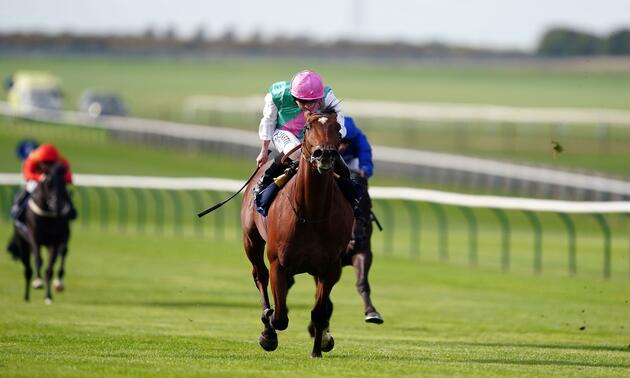 Newmarket’s three-day Cambridgeshire meeting started on Thursday and the Sir Michael Stoute-trained Nostrum (112p from 104p) built on the considerable promise of his debut when defeating Chesham Stakes winner Holloway Boy (108 from 106p) by one and a quarter lengths in the Tattersalls Stakes.

He had just two serious rivals but there was plenty to like about them on paper and Nostrum produced a smart effort on just his second start despite still looking very much in need of the experience. Nostrum wandered and ran green when shaken up two furlongs out but he had too many gears in the closing stages and his closing sectional puts a positive view on the form.

He is clearly a colt with a bright future, no doubt a candidate for the 2000 Guineas next year (currently a general 8/1 chance), while the Dewhurst Stakes next month is a potential next target for him, though given his size and stage of mental development, connections might be tempted to skip that option.

There was a mix of improving sorts and those with proven pattern form in the Princess Royal Stakes on Friday and Eternal Pearl (117p from 107p) showed much improved form to overcome the run of the race and record a four-timer.

She had finished runner-up to the third Sea Silk Road (down 3 lb to 109) in a listed event earlier in the season, but she has progressed markedly since, and she defied a 3 lb penalty in the style of a filly who can make her mark at a higher level.

Eternal Pearl was given a patient ride and still had plenty to do two furlongs out, but she picked up in taking fashion to run down the improving and better positioned Peripatetic (107 from 100) with something to spare. This performance suggests she is well up to taking her chance in the Fillies And Mares Stakes on Champions Day now.

The Rockfel Stakes is one of the key races in the calendar for two-year-old fillies and Commissioning (112p from 95P) produced one of the best performances in the race since Promising Run in 2015. The proximity of the fourth is a slight concern, but the excellent overall time encourages a positive view of the form, and the second and third both arrived with similar profiles.

Commissioning became the first horse since 2013 to win the Rockfel on the back of one and there is no doubting she is an exciting prospect, clearly a filly with the potential to develop into a classic prospect, the 1000 Guineas and Prix de Diane races that may well come into the reckoning next year.

This year’s renewal of the Joel Stakes wasn’t a strong one and it also turned into a tactical affair, Mutasaabeq (remains 119) seen to good effect on the front end and not having to improve to belatedly gain a first pattern success.

The addition of first-time blinkers seemingly helped but he also came in for a good tactical ride and the third, Tempus (remains 120), arguably shaped best of all. His chance was ruined after he fluffed the start and he also had to wait for room when still travelling well two furlongs out. He would have almost certainly finished second with a clear run, while he may have even troubled Mutasaabeq, and he is well worth another chance in similar company next time.

On Saturday the Cheveley Park and Middle Park were the two feature Group 1s, though the card started with an unsatisfactory renewal of the Royal Lodge Stakes, which was run at a dawdle and developed into a sprint for home.

It was not a proper test for staying two-year-olds and The Foxes (106p from 97p), whose maiden win at Goodwood had worked out well, progressed again to come out on top upped to a mile. The step up in trip was neither here nor there in a two-furlong sprint, but he should get his chance in a more truly-run race before long, with the Vertem Furtuity at Doncaster next month an ideal opportunity. It is worth noting that a cautious view of this form should be taken, though.

The extremely well backed Flying Honours (down 2 lb to 105p) wasn’t able to land sustained support in a race which wasn’t run to suit, but he did stand out on form beforehand, and is well worth another chance to progress once his stamina is properly tested. It would be no surprise if he reversed the form with the winner if the two meet at Doncaster next month.

The Cheveley Park Stakes, the first Group 1 in Britain for juvenile fillies, featured seven horses who had already won in pattern company and, though the standard-setter Trillium (111 from 111p) failed to give her running, the form has a solid look to it.

The winner, Lezoo (112 from 103), ran to a level roughly on par with the five-year average and the timefigure also gives the form extra substance. She defeated two solid rivals in Meditate (remains 109) and Mawj (107 from 103) with a bit in hand to make it four wins from five starts.

Lezoo is a more speedier type than the placed pair and she doesn’t promise to stay beyond six furlongs. She also isn’t entirely sure to progress much further next season given she isn’t the biggest, but she will go to the Breeders’ Cup later in the year with sound claims, sure to be suited by the American style of racing.

The Middle Park Stakes was missing two of the best two-year-old sprinters of this season in Little Big Bear and Noble Style, but Blackbeard (118 from 110) produced a career-best effort to record a third straight win in pattern company.

He showed signs of his usual quirks beforehand, but none whatsoever in the race itself, clearly thriving on his racing (this was his sixth start in pattern company) and sure to be a force to be reckoned with at the Breeders’ Cup, which has been outlined as his final task of his year. Blackbeard’s pedigree offers hope that he will stay seven furlongs or even a mile (holds an entry in the Irish 2000 Guineas), but Aidan O’Brien described him as a horse with plenty of speed, and sprinting will more than likely be his aim next season.

As is the norm for high-end handicaps, plenty in the Cambridgeshire held no secrets from the assessor, but it once again is solid form, the progressive Majestic (100 from 93), who crept in at the bottom of the weights, coming out on top, with another upwardly-mobile four-year-old and a couple of older horses who had fallen in the weights completing the frame.

The winner will remain of interest in handicaps up to a mile and a quarter, while the third, Dual Identity (106 from 104), can be marked up as he did comfortably the best of the octet who raced on the far side. He's clearly right at the top of his game and is versatile with regards ground, so will remain towards the head of the shortlist for other races this backend (entered in Balmoral on Champions Day but may not make the cut).