Ratings Update: Breeders' Cup 2015 and the return of the jumps 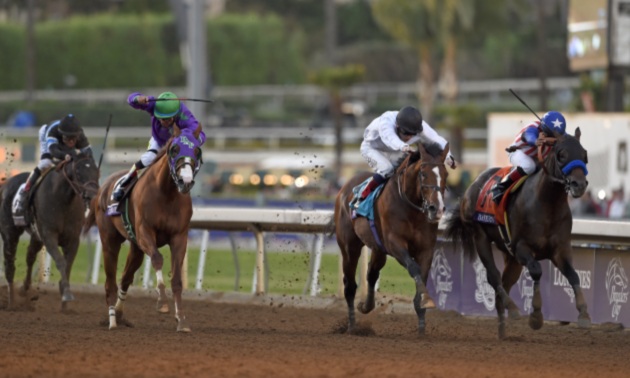 "We were less concerned about the newly-coined ‘Grand Slam’ that American Pharoah was bidding for in Saturday’s Breeders’ Cup Classic than we were about the performance he’d put up... We needn’t have worried."

Timeform took up the rating of US-based horses in 1993, the first ‘Top horses in North America’ appearing in the Racehorses annual of that year. It’s fair to say the company was prone to some of the less-than-kind stereotypes about Americans in the early days, as can be inferred from this Perspective entry on Cigar when he won the Massachusetts Handicap at Suffolk Downs in June 1996:

“Cigar moved to within one of Triple Crown winner Citation’s 1948 record of 16 consecutive wins; this type of streak is the sort of thing many Americans tend to latch onto and hype up, though for our part the possibility of the form he may achieve at Hollywood Park [in the Hollywood Gold Cup, his presumed next race] - even in defeat- is far more exciting…”

Though the language would be less curmudgeonly nowadays, the philosophy carries on in much the same vein. We were less concerned about the newly-coined ‘Grand Slam’ that American Pharoah was bidding for in Saturday’s Breeders’ Cup Classic than we were about the performance he’d put up; hence our disappointment when star mare Beholder was withdrawn from the race.

We needn’t have worried. Even without Beholder (129) to test him, American Pharoah put up his best performance in Saturday’s Classic. Despite only Effinex (127) ever really putting it up to him up front, he easily pulled far enough away from the field to achieve a new rating of 138. That marks American Pharoah’s performance as the best at any Breeders’ Cup by Timeform’s reckoning, and makes him the joint-highest rated US horse since Timeform started producing US ratings. For that honour he is tied with none other than aforementioned Cigar.

American Pharoah’s performance was by some way the highlight of the Breeders’ Cup, which otherwise had a strong late-season feel to the form. Few of the big-race winners improved their ratings by much, not Found (123) who edged out an underperforming Golden Horn (133) in the Turf, nor Tepin, (125) whose path in the Mile was made much smoother by the failure of European hopes like Make Believe and Esoterique. Legatissimo (122) was also at just shy of her best, which allowed Stephanie’s Kitten (119) to take an unexpected win for the Americans.

For much of the night, it looked as though nothing might beat the performance of Songbird in the opening Juvenile Fillies. She went about things much like American Pharoah would nearly six hours later, going off in front and winning unchallenged by just shy of six lengths. She’s now rated 125p and, with a substandard Juvenile (won by Nyquist, 119) following later on the card, it could easily be conceived that she will be favourite for the Kentucky Derby come next May, a 5-lb allowance for fillies in that race meaning Songbird effectively sets a top-class standard.

The Friday of the Breeders’ Cup meeting is being slowly cannibalised by its over-sized sibling, but this year there were a couple of noteworthy performances to pick out. For Europeans, Hit It A Bomb (119p) delivered an incredible late surge to land the Juvenile Turf and now enters calculations for the big three-year-old prizes next year, calculations that are admittedly complicated by him being in the same yard as champion juvenile-elect Air Force Blue (128p). But for that, we’d say 20s for the Guineas is on the generous side.

American fans also have something to look forward to in Dirt Mile winner Liam’s Map- or at least they will have should the current plan to retire him to stud be shelved. The retirement of American Pharoah would leave Liam’s Map as just about the highest-rated horse in North America on 130, a figure he might even have improved upon in 2016 given he’s four and has emerged as a top-level performer only in the last three months.

The Breeders’ Cup is to all intents and purposes the end of the Flat season, certainly for Ratings Update which rarely has reason to study the November Handicap at length. The jumps takes over as of right now, with the remainder of this column dealing with Wetherby and Ascot.

The Charlie Hall Chase was the feature race in Britain and it offered a taste of what we could have in store among the staying chasers this winter. This was still the second tier, none of the runners shorter than 20/1 for the Gold Cup even now, but it was arguably one of the strongest renewals this century.

Victory ultimately went to Cue Card, whose comeback echoes that of Kauto Star in his final Betfair Chase four years ago. Like Kauto, Cue Card was returning after an injury-hit season and, like Kauto, he was fully readied in order to use his reappearance as a litmus test. As such, he was able to sustain the searching pace he’d helped set, also aided by the return of his superb jumping (further parallels etc.) as he held off Dynaste (166) and Ballynagour (165). Cue Card is now rated 171 and, though we can’t quite see a return to his 180-rated best, he’ll be competitive in races like the Betfair Chase and King George if able to repeat the performance. Even that would be a remarkable turnaround given where he was less than 12 months ago.

The staying hurdlers division is nearly as competitive as that of the staying chasers, but the quality isn’t as high. Therefore Kilcooley enters the World Hurdle picture upon achieving a figure of 161 for winning Saturday’s West Yorkshire Hurdle. Failings among his rivals mean we can’t have total faith in the result (and his rating is a conservative one, reflecting that), though he evidently stays three miles well, given the relentless gallop he set. His mettle will be tested to a greater degree in the Long Walk Hurdle, his reported next target.