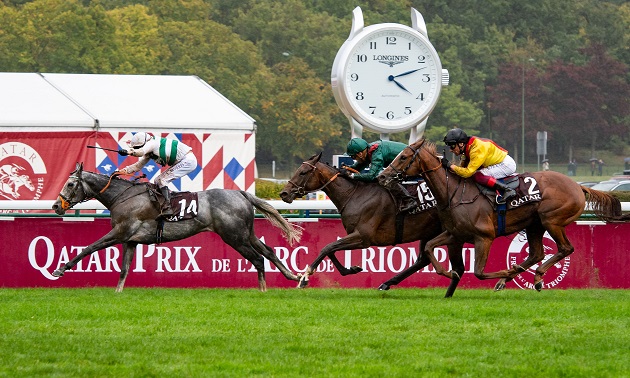 Even without Champion Stakes-bound Baaeed and in the absence of Desert Crown, not seen since taking the Derby so impressively, this was still a deep renewal of the Prix de l’Arc de Triomphe, Europe's premier middle-distance prize.

The maximum field of 20 runners included the winners of this race last year, the Prix du Jockey Club and Eclipse, the Irish Champion Stakes, the Irish Derby, the Grand Prix de Paris, the Yorkshire Oaks, as well as a top Japanese horse – indeed, nine of the 20 had won a Group 1 in 2022, with a further six successful at the highest level previously in their career.

In the event, three of the established class horses came to the fore, with Alpinista (127 from 123) becoming the eighth older horse to win in the last 11 years and the fifth female to win the race since 2011.

Alpinista scrambled home in a four-runner listed race at Goodwood on her reappearance last year, but she has progressed relentlessly since then, matching her grandam Albanova with a trio of German Group 1s last year, claiming the scalp of Torquator Tasso (128) along the way, and taking her form up another notch this year, her fourth and fifth Group 1s in succession at Saint-Cloud and York surpassed with this elite victory.

Perfectly drawn to chase the leaders, Alpinista travelled notably strongly encountering softer ground than previously and was still on the bridle when taking up the running inside the final two furlongs.  She was asked for her effort only over a furlong out and was always holding on from there as Vadeni (130 from 127) and last year's winner Torquator Tasso came at her, ultimately landing the spoils by half a length.

This represented the zenith in the respective careers of both Sir Mark Prescott (in his fifty-third season training) and owner-breeder Kirsten Rausing, whose foundation mare Alruccaba, bought in 1985, is the fourth dam of Alpinista.

As for the future, Alpinista is set to be retired at the end of the season, but the lure of the Japan Cup prize fund (she's eligible for a huge bonus on top of the winning prize) will be hard to resist in the interim. Although beating the Japanese on their soil will be much harder than it was on this ground, this level of form would give her a good chance of doing so.

Vadeni – who emerged as the best horse at the weights when the sex allowance is factored in – became the first three-year-old since Enable in 2017, and the first colt of his age since Golden Horn two years earlier, to hit the 130-barrier on Timeform ratings in this race. In his case it was only enough for second, a bit of a stretch to call him unlucky but little doubt that things went that bit more smoothly for the winner than they did him.

This performance opens up more options for Vadeni as he ran on strongly once in the clear, fully proving his stamina for a mile and a half on soft ground. He is set to stay in training as a four-year-old, with all roads surely leading back to Longchamp in 2023.

Torquator Tasso, on the other hand, is unlikely to run in the Arc for a third time next year as retirement beckons at the end of the campaign. He put up a valiant defence of his crown without things going smoothly, staying on from a long way back after being forced to race wider than ideal, and the form he showed in defeat was arguably as good as when winning 12 months earlier.

Unusually, the best performance on Arc weekend didn’t come in the big race itself. Instead, that honour belonged to Kyprios (131 from 126), who produced an extraordinary staying effort when routing his rivals in a gruelling edition of the Prix du Cadran on Saturday’s card.

Put simply, this was one of the best performances by a stayer since the early-80s as he won by a record-equalling margin for a Group 1, passing the post 20 lengths in front of his closest pursuer despite almost running sideways for much of the final furlong. He reportedly lost an off-fore shoe, which may explain his display, though being so far clear he almost certainly lost concentration.

This victory was Kyprios’ sixth from as many starts this season, the last four coming at Group 1 level over trips ranging from a mile and three-quarters to two and a half miles. All the same races are likely to be on the agenda again in 2023 and it’s hard to see anything living with him in the staying ranks if he continues in this sort of form.

Kyprios is set to bypass Champions Day at Ascot, but Saturday’s card still provided a few clues for that fixture as Erevann (122 from 121) won the Prix Daniel Wildenstein and Sea La Rosa (112) won the Prix de Royallieu.

Erevann was always in control after being produced to lead over two furlongs out, just needing to be kept up to his work from there to win by a length and a half from The Revenant (120 from 121). The first two are likely to clash again in the Queen Elizabeth Stakes where Erevann will also get the opportunity to try and avenge the only defeat of his career at the hands of Inspiral in the Prix Jacques le Marois.

Sea La Rosa has also suffered just one defeat this season – when filling the runner-up spot behind Free Wind in the Lancashire Oaks – and she didn’t need to improve to gain a first success at the top level in the Prix de Royallieu, gradually asserting in the final furlong to win by a length.

A likeable type, Sea La Rosa will be well worth her place in the line-up for the Fillies & Mares Stakes on Champions Day, but that will probably require a career best for her to further enhance her very good strike rate.

Meanwhile, the Champions Sprint could enter calculations for Kinross (123) following his decisive victory in Sunday’s Prix de la Foret, though he also has the option of heading to the Breeders’ Cup.

A short-priced favourite to go three places better than last year, Kinross has been an improved horse this time around and duly got the job done with the minimum of fuss, just needing to be pushed out to win by two lengths. He is of similar ability to last year’s winner Space Blues, who followed up in the Breeders' Cup Mile, and connections are reportedly favouring a tilt at that contest next.

The Breeders’ Cup also beckons for The Platinum Queen (111), another Group 1 winner for Britain on Arc weekend as she became the first two-year-old to win Sunday’s Prix de l’Abbaye since 1978 when another filly, Sigy, was successful for Criquette Head.

The Platinum Queen proved herself under still softer conditions than last time with little sign of it blunting her abundant speed but, surprisingly, it turned out she didn't need to improve back against older rivals to go one better than she had in the Nunthorpe.

She was undeniably game in front, ultimately winning by a short neck, though this was anything but a vintage field, the winner's Nunthorpe conqueror Highfield Princess missing for one, while the fact that three of the more interesting runners copped the worst of the draw made it a lot less competitive, too.

The two Group 1 races restricted to juveniles on Sunday’s card both went the way of the home team as Belbek (111 from 102) won the Prix Jean-Luc Lagardere for Andre Fabre and Blue Rose Cen (114 from 99) won the Prix Marcel Boussac for Christopher Head.

Blue Rose Cen has generally been on an upward curve, but this was a career-best effort by some way as she forged clear in the final furlong to win by five lengths, the combination of a well-run race and soft ground evidently something she relished.

She's clearly smart, beaten only by the Ballydoyle colt Victoria Road in her last four starts, and, out of a mare who ended up winning at Grade 3 level in the States over a mile and a half, she'll stay longer trips next year.

Similar comments apply to Belbek, who put up a smart effort to cause a minor surprise, stepping up in trip the obvious catalyst as he stayed on well to get the verdict by a neck. He'll have no trouble staying a mile and the Futurity at Doncaster was mentioned as an option, though he'd have to be supplemented and that race typically takes more winning than this one.

Fabre caused an even bigger surprise in the Prix de l’Opera with the Prix de Diane also-ran Place du Carrousel (120 from 106), who stormed home to beat the winner of that contest, Nashwa (119 from 121p), by three quarters of a length, with the filly who'd beaten her previously in the Prix Saint-Alary, Above The Curve (116 from 113p), another short head back in third.

Place du Carrousel clearly relished the extra emphasis on stamina on softer ground than previously and the way she finished off here suggests she'd be worth a try at a mile and a half, her smart dam a winner at up to 15 furlongs.

Back in Britain, John and Thady Gosden, who train Nashwa, also had to settle for minor honours in Saturday’s Sun Chariot Stakes at Newmarket with Laurel (117p from 106P) and Grande Dame (113 from 113p).

Fonteyn (119 from 108) – who had finished fourth behind Nashwa on her only previous start at the top level in the Nassau Stakes – took a big step forward to lead home that pair, though she was probably seen to advantage in racing up with the pace and then closest to the rail, particularly in the last 100 yards as she overhauled the inexperienced second, Laurel.

Fast tracked to Group 1 level after just two wins in novice events, Laurel very much looks the part and she showed herself potentially a top filly for next year, just her lack of experience costing her victory after she'd looked to come with a winning run. She is open to further improvement and looks sure to win good races as a four-year-old.