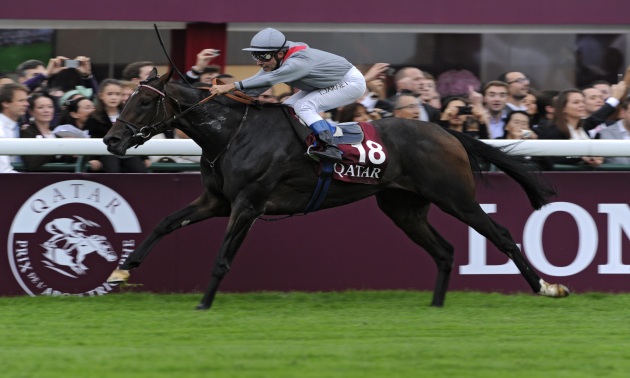 Keith Melrose covers a weekend of both history and future possibilities.

Tried My Timeform yet? You can add detailed notes, keep your eye-catchers organised and decide when you receive e-mail alerts when your horses run. And best of all, it's FREE! Find out more HERE.

In time you’ll be able to write a book made up of eulogies for Treve’s racing career- some already written, countless others still to come. I don’t expect this Ratings Update will be among them.

We're not going to suggest any sort of asterisk beside Treve’s achievement at Longchamp on Sunday- after all we’re talking about the first dual Arc winner since James Callaghan was Prime Minister and Grease was filling cinemas. Neither is it an attempt at levity by Timeform’s ultra-pragmatists. I for one will confess to the tiniest of lumps in the throat as the result and its significance sunk in.

It’s just that a sober, numerical assessment of the Treve of 2014 doesn’t invite the same effusive terms as the accompanying story. Plenty went right for her on Sunday, plenty went wrong for others and it was Flintshire, long exposed as one just shy of the top bracket, who chased her closest. As has been pointed out, the truly great performance was from trainer Criquette Head-Maarek, who insisted on rolling away the stone while others were resigned to mourning. She unwrapped Treve and let her go.

It’s primarily Flintshire, plus a moderate pace that drew the likes of Prince Gibraltar too close to the principals, that keeps a lid on the bare form of the 2014 Arc. The winner achieved a figure of 129, making it a narrow season’s-best in ratings terms. The runner-up gets 128, a clear career-best for him.

In behind there were several who could tell hard-luck stories of one stripe or another. Top of the list has to be Harp Star. It suffices to say here that her jockey Yuga Kawada was guilty of one of the worst examples of failing to ride to the race that you’ll see in such a high-level contest. Harp Star eventually finished sixth, coming home at a pace that would match sprinters, and has been marked up to a performance of 128. That signifies that she would have pushed the winner close with a more judicious ride.

The Arc day card at Longchamp is so strong these days that other races demand attention, even if the temptation is there to get lost in analysing the feature.

This year the two-year-olds provided the strongest talking points. The Marcel Boussac is the easier to discuss as the record books will tally with what we saw and what we can infer. Found is now fighting out favouritism for the 1000 Guineas with Cursory Glance after a victory characterised by a potent turn of pace. In terms of ability that’s about right: she’s rated 115p, Cursory Glance 116p and Found’s symbol is, if anything, slightly the stronger. The question is stamina: on pedigree Found will stay 10 furlongs, perhaps even 12. In practice she’s looked a bit speedier than that.

The Jean-Luc Lagardere is a bit more difficult. Gleneagles crossed the line first, the ante-post markets have reacted like he won it on merit (which he did), yet he’s been placed third in the Stewards’ Room. The pros and cons of the authoritarian rules employed in French racing to deal with interference are a discussion for another time, though for now we’re quite happy to rate Gleneagles as a worthy winner, with no allowance for extra among his rivals.

Gleneagles is now rated 113p. In the Ballydoyle pecking order, that puts him ahead of Highland Reel and Ol’ Man River (both 111p) but behind John F Kennedy (116p). He’s arguably more of a Guineas type than any of those, though he’s still half a stone or so off the standard required of an average Guineas winner so books placing him joint-favourite for that race have arguably overreacted a little.

There was an inferior feel to many of the older-horse Group 1s on the card. The exception to that would be the Foret, won by Olympic Glory who was the beneficiary of a strong pace. He’d been held up and has amply proved his stamina for further, so Frankie Dettori’s main task was getting through the gaps. It is at least a return to form for Olympic Glory, who ran to 128 and stays on 130. In behind the big news is arguably Noozhoh Canarias, who helped force the strong pace yet recorded a career-best 125. Under the right circumstances, he could win a Group 1 over six or seven furlongs in 2015.

Performances in the 110s were enough to win the other Group 1s. High Jinx ran to his pre-race figure of 116 to win the Cadran, while the other side of the big race We Are improved just 1 lb (116) to win the Opera, just denying High Jinx’s stablemate Ribbons. Move In Time beat the most daredevil group of daffy drivers to ever whirl their wheels in the Prix de L’Abbaye and earned a figure of 119 for his efforts.

Back home there was Group 1 racing, though Group 1 racing of the type that was liable to be overshadowed by an extraordinary performance at listed level. That performance came from Limato, whose effortless success at Redcar thrusts him to the top of Timeform’s juvenile ratings. He never came off the bridle and is now rated 121p, joint with Tiggy Wiggy who can’t match his symbol.

Limato has come along at the right time. In previous years connections might have been tempted to try the Guineas given Limato’s pedigree. Instead he’ll surely go for Royal Ascot’s new sprint for three-year-olds, for which he is very much the leader on the road.

A couple of later-developing sprinters fought out the finish to the Bengough Stakes at Ascot. Both Lightning Moon (122p) and Danzeno (124p) will be Group 1 quality next year, though that the winner is reportedly fragile and the runner-up perhaps isn’t totally straightforward tempers enthusiasm just a little.

The Group 1 mentioned at the top of the Home News section was of course the Sun Chariot. It hasn’t cropped up yet as from a ratings perspective it’s fairly incidental. One of the best fillies, Integral, got the best ride and won comfortably as a result. She stays on 121.

To bookend with retiring fillies, the Sun Chariot is reported to have been Sky Lantern’s last race. She got as high as 120 last year, when she won three of her four Group 1s. She had struggled in 2014, running no better than a 110, which she produced on her reappearance at Royal Ascot.

Tried My Timeform yet? You can add detailed notes, keep your eye-catchers organised and decide when you receive e-mail alerts when your horses run. And best of all, it's FREE! Find out more HERE.