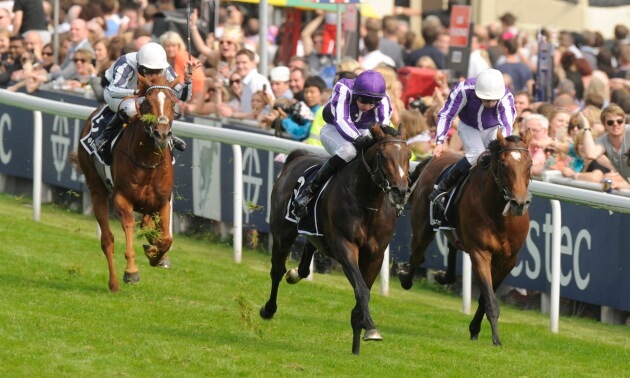 Pedigree researcher Sally Wright takes a look at the first winner of the English Triple Crown.

With classic season upon us and after Saxon Warrior's May victory in the 2000 Guineas, attention turns to the possibility of whether he can go on to win this weekend's Derby and then the St Leger Stakes at Doncaster in September, the three races that constitute the English Triple Crown.

There have been only fifteen winners of the English Triple Crown in its long history. Here I concentrate on the gallant West Australian, who is recognised as the first to complete the treble in 1853.

Foaled in 1850, West Australian was bred and owned by an illegitimate son of wealth named John Bowes. By the classic sire Melbourne and out of Mowerina (by Touchstone), a sister and half-sister to Epsom Derby winners Cotherstone and Mundig, he was described as being of a yellowish-bay hue, quite long in the body and with a "low stealing action", "peculiar ears", slight weight issues and a tendency for lameness. Trained by John Scott at Malton in Yorkshire, the colt was a highly tried two-year-old on the Malton gallops but didn't see a racecourse until the back end of the season. Once fit, he easily won a six furlong trial race in August then ran twice in the same week in October, beaten a length by Speed-the-Plough in the Criterion Stakes at Newmarket before winning a more strongly-run £700 Glasgow Stakes over six furlongs by two lengths.

Returning the following year with no prep race, West Australian went straight for the 2000 Guineas at Newmarket in May. Sent off favourite (as he was for all his three premier races), he won the heavily rained-upon event comfortably by half a length from Sittingbourne.

In a field of twenty-eight Derby contestants, West Australian won by a neck over the same rival, before returning to tackle the St Leger in the autumn. Winning in a canter by three lengths, the Yorkshire-trained winner was called home loudly by local supporters in a "perfect hurricane of cheers" as he tied up the first (yet to be coined) English Triple Crown series. His next race, a sweepstake at Doncaster saw him ‘walk over’ after the withdrawal of some dozen opponents and he finished a glorious season as the only runner to contend the Grand Duke Michael Stakes at Newmarket, in the process becoming the leading English money winner, with earnings of £10,950.

Only seen out three times in a short four-year-old season, he once more proved his durability by winning all of his races. Free money again rolled in as John Bowes collected on a forfeit on a match race scheduled at Newmarket with Barbatus. He then contested the Triennial Stakes at Royal Ascot in June, beating Lord Eglington's Vanderdecken (a full brother to the legendary Flying Dutchman) and later at the same meeting he took the Ascot Gold Cup by a head from the older Kingston, in front of a crowd that included Queen Victoria and the Duke of Wellington. 'The West' topped off his racing career by winning a Goodwood sweepstake by a staggering twenty lengths. He was then sold to Lord Londesborough for five thousand guineas to stand as a stallion, for a breeding fee of thirty guineas.

At stud he produced some good horses; Summerside won the Oaks in 1859 and The Wizard (1857) won the 2000 Guineas, was runner-up in the Derby and finished third in the St Leger, before being sold for stallion duties in Prussia. Another son, Michael Scott (1861), won four and three races, on separate occasions, in the space of just two days before being sent to Russia. Although at the time considered unsuccessful as a stallion, West Australian's lasting influence is much more notable, as he ensured the survival of the male bloodline for the Godolphin Arabian sire through his sons Australian and Solon. The former became the tail-male ancestor of the top-class six/seven furlong winner Dream Ahead (2008), a successful dual-hemisphere sire, and also the two-time Breeders' Cup Classic winner Tiznow (1997) and his stallion sons in the US and South Korea. Solon's male line has practically died out in the modern-day commercial Thoroughbred but its presence is felt strongly in the European Sporting Horse world.

After West Australian's efforts, it would be a further twelve years before the English Triple Crown was won again, by the mighty Gladiateur in 1865, with a total of eight colts having achieved the feat by the end of the nineteenth century and another seven doing in the twentieth. Bahram won the Triple Crown in 1935, a feat not repeated until Nijinsky saw off his rivals in 1970. He remains the last winner of this elusive English series to date.

Only 15 horses have been successful in winning the Triple Crown; The 2000 Guineas, The Derby and the St Leger. The most recent being Nijinsky in 1970. Could this year see a challenger? pic.twitter.com/nzOB2veZ8E

In 1989 and 2009 Nashwan and Sea The Stars both won the 2000 Guineas and Derby without contesting the St Leger but Camelot in 2012 went closer than any since Nijinsky, winning the first two colts' classics before finishing second at Doncaster. St Leger winners aren't fashionable as Flat stallions nowadays, but things were very different for the likes of West Australian, who thrived at a time when stamina was a prized asset for a potential stallion.

West Australian’s first English Triple Crown would in time inspire foreign imitations as well as the fillies' version (consisting of the 1000 Guineas, Oaks and St Leger, last won by Oh So Sharp in 1985) and perhaps most famously, the US Triple Crown, made up of the Kentucky Derby, Preakness Stakes and Belmont Stakes. The weekend after Saxon Warrior’s Epsom Derby tilt, the unbeaten Justify aims to complete the US sweep after taking the first two races, and in doing so will try to emulate American Pharoah’s victories in 2015.