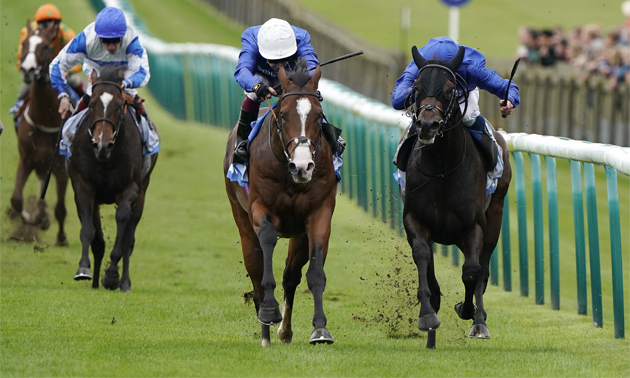 Timeform's Adam Houghton identifies four horses to look out for at Newmarket this weekend, including a couple of contenders at double-figure odds in the first two classics of the British Flat season.

When Waldkonig’s sire Kingman made a winning debut at Newmarket in the summer of 2013, it wasn’t just the visual impression he made that caused people to sit up and take notice. The overall time was excellent, with the closing sectional recorded by Kingman even better, indicating after just one performance that he was likely to take high rank amongst the season’s juveniles. History tells us he did more than that, proving himself a top-class miler and ending his career with just one defeat (in the 2000 Guineas) from eight outings.

Waldkonig also made a winning debut and did something noteworthy on the clock, only in his case it was at a much lower-profile meeting at Wolverhampton in December. The opposition was ordinary but Waldkonig created a lasting impression, not only overcoming inexperience to come clear by a wide margin, but also recording a notably fast sectional for the final two furlongs.

They don't get much more exciting than this! A son of Kingman and a half-brother to Arc winner Waldgeist, John Gosden's Waldkonig romps to a debut success at @WolvesRaces! pic.twitter.com/e2A7KZclpD

That performance suggested that Waldkonig possesses all the necessary tools to develop into a smart middle-distance performer at the very least this season, like so many other members of his family before him (siblings include none other than the Arc winner Waldgeist). This listed contest would provide a stern test of his Derby credentials, though trainer John Gosden has also given him another option in much calmer waters this weekend in a minor event at Lingfield on Sunday. John Gosden

All eyes will be on Pinatubo at Newmarket on Saturday, when Timeform’s highest-rated two-year-old for 25 years puts his unbeaten record on the line in the 2000 Guineas against Kameko and the Aidan O’Brien-trained pair, Arizona and Wichita, in what looks potentially a high-class renewal.

Godolphin could also field multiple runners, with the one-two from last year’s Autumn Stakes, Military March and Al Suhail, set to join Pinatubo in the line-up. In any ordinary year, both horses would be considered leading Guineas contenders themselves, with every reason to be positive about the form of the Autumn; the time was good, the first two pulled seven lengths clear of the third and there was plenty to like about the way Military March knuckled down and saw off Al Suhail, who briefly looked to have taken the upper hand.

A one, two finish for @godolphin

The previous renewal of that Group 3 contest had seen Persian King and Magna Grecia – both classic winners the following year – fight out the finish, and everything about Military March points to him making further progress himself as a three-year-old, a well-made sort who is bred to come into his own over middle-distances.

That explains why he’s amongst the ante-post favourites for the Derby, but, in the meantime, he looks overpriced at around 16/1 for the 2000 Guineas, with his smart C&D form as a two-year-old identifying him as one of the chief dangers to the same owner’s Pinatubo. Saeed bin Suroor

Once-raced as a juvenile, Trueshan reappeared in 2019 with a last-gasp win in a minor event at Wolverhampton, making his progress throughout the rest of the year all the more impressive, going on to win three of his four subsequent outings and ending the season with a Timeform rating of 120, nearly double the rating he’d had when his campaign started.

His final start saw him take the scalp of another promising sort, the William Haggas-trained Hamish, in a Newbury minor event in late-autumn, coping really well with the more testing ground and showing a terrific attitude to come out on top in the style of one destined for better things.

Trueshan denies Hamish to make it four from five this season, two good performances from two exciting young stayers in the £50,000 highlight at @NewburyRacing

Indeed, any stayer able to breach that 120 ceiling must almost automatically be considered a pattern-race winner in waiting. The imperious stayer of recent seasons, Stradivarius, landed back-to-back Ascot Gold Cups without rating any higher than 128 on the Timeform scale, which gives context to the far-from-unassailable leap the strong-staying Trueshan must make to live up to our expectations and prove himself at home in that sort of bracket.

Admittedly, the trip of this listed heat is likely to prove a bare minimum for as the season develops, but it’s worth pointing out that he’s already a winner over C&D, landing the valuable Old Rowley Cup on his penultimate outing. Alan King

Richard Hannon Jr. recorded the 1000th winner of his training career in 2019 – a quite remarkable feat when you consider he saddled his first runners only five years earlier – and there has been plenty of big-race success for him to savour along the way, including a pair of classic wins with Night of Thunder and Billesdon Brook.

The latter was a 66/1-shot when winning the 1000 Guineas in 2018 and Hannon looks to have another interesting outsider for this year’s renewal in the shape of Cloak of Spirits, who showed a useful level of form in three two-year-old outings. Admittedly, she failed to win either of her starts in group company after making an impressive debut at Ascot in July, but there was encouragement to be taken from her third in the Rockfel Stakes here on her final outing, rallying gamely to be beaten just half a length behind Daahyeh (an absentee here due to injury).

Seemingly held in high regard (strong in the betting for all three juvenile starts), Cloak of Spirits looked immature at times last season but could be the sort to take her form to another level as she gains in experience. Indeed, her high-class pedigree is also consistent with one likely to make further improvement at three (by Invincible Spirit and out of a Pivotal mare who is closely related to Dubawi), so she makes plenty of each-way appeal at around 12/1 in an open renewal. Richard Hannon Jr.