Weekend highlights: Your at-a-glance guide to the action at Ayr and Newbury 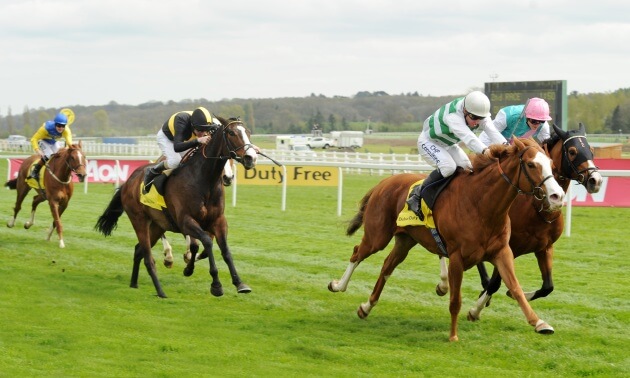 Timeform's Andrew Asquith highlights some key horses to look forward to this weekend.

The highest-rated runner on the Flat in Britain this weekend

Deja is clearly a fragile sort, but he remains lightly raced as a result and his strike rate is hard to argue with, winning five of his nine starts. Last season was the first time he had made more than two appearances in a year, and he put up by far his best performance to date when scoring in the Old Newton Cup at Haydock. It was a thoroughly competitive renewal of that valuable handicap, and Deja produced a smart performance to beat several well-handicapped, in-form rivals with something to spare. The way the race unfolded really brought his stamina into play, and he seemingly relished the heavy ground. All of his best form has come on ground softer than good, which is a slight concern, but the galloping nature of Newbury will really suit him and his record when fresh is excellent.

Foxes Tales cost 400,000 guineas as a yearling and is related to some smart sorts, so it was highly encouraging the way he shaped on debut at Kempton in December. It was an interesting novice event for the time of the year, and Foxes Tales attracted support in the market beforehand, so clearly he had been working well at home. He was arguably unlucky not to make a winning debut, too, making up a lot of ground on the winner in the straight having been positioned in the rear following a slow start. Foxes Tales had many more in front of him than behind entering the straight, but he made rapid headway in the style of a smart colt, finishing his race of very strongly. He has the Timeform large ‘P’ attached to his rating, denoting his is open to significant improvement, and he looks a pattern-class performer in the making.

This looks an interesting renewal of the Greenham, but they all need to go some to beat Chindit, who sets the standard on both form and time. He looked a smart prospect when making a winning debut at Doncaster and confirmed that impression when winning the Champagne Stakes over the same course and distance on his third start. At the time, it was one of the best performances recorded by a two-year-old in Britain all season, with the excellent timefigure providing plenty of substance to the form. Admittedly, he was well beaten in the Dewhurst at Newmarket when last seen, but nothing went right for him on that occasion, and he is best not judged too harshly on that display. Chindit wasn’t given a hard time once his chance had gone and has likely had this as his comeback target for a while. Newbury will suit him well, and, a good-topped colt, he is just the type to progress again as a three-year-old.

Chindit stays unbeaten and wins the bet365 Champagne Stakes at @DoncasterRaces to make it three out of three#ITVRacing pic.twitter.com/ucAsW4ZbYV

Troll Peninsula found only the exciting Future King too good on his debut in a back-end maiden at Newcastle last season, and he duly went one place better in heavy ground at Redcar 13 days later. He made hard work of justifying odds of 7/4-on that day, but he was much improved on his recent return at Kempton, impressively stretching clear under a penalty to win a minor event by three and a half lengths. Troll Peninsula was very strong in the betting and looked a horse to keep on the right side given how he powered clear, recording an above-average closing sectional. On that evidence, Troll Peninsula appears to have been let in very lightly from an opening mark of 88, and, though this does look very competitive on paper, there shouldn’t be many better treated than him.

King d’Argent has looked a natural since sent chasing, winning all three of his completed starts, and he could rate even higher still judged by his latest success at Warwick. He was ridden with a little more restraint but proved much superior to his rivals at his fences, jumping rapidly and proving too speedy for his rivals when he turned the screw entering the straight. King d’Argent seems well suited by good ground, which allows him to showcase his lethal change of gear, and a subsequent 9 lb rise in the weights underestimates him. He has been found another small field and another dominant display is forthcoming.

King D'Argent shrugs off his 10lb rise and dominates his rivals in the feature under @harryskelton89 at @WarwickRaces.

A sixth winner in little over 24 hours for @DSkeltonRacing and team 👏 pic.twitter.com/nB5gmaWWhW

On Timeform’s scale, there is no Flat trainer in better form that Sir Michael Stoute, who has made a quicker than usual start to the season. He is operating at a remarkable 45% strike rate (at the time of writing) this year and typically has some interesting horses entered up this weekend. He is set to introduce a well-bred colt in the shape of Masnoon in the first race at Newbury on Sunday. It looks a warm enough event on paper with the exciting Snow Lantern set to make her seasonal reappearance, but Masnoon is out of a half-sister to a couple of smart performers, and it will be interesting to see how he fares in the market.

The Fred Darling looks an intriguing renewal and Stoute relies on Ville de Grace. She became the yards first juvenile winner of the season when making a winning debut at Kempton in June and took a big step forward when finishing second to a potentially smart sort under a penalty at Yarmouth on her next start. Ville de Grace clearly goes well when fresh and has a pedigree that suggests she’ll progress further this year now moving up in trip. She must be of interest for a bang in-form yard.