The pecking order for Epsom: Kameko the clear leader 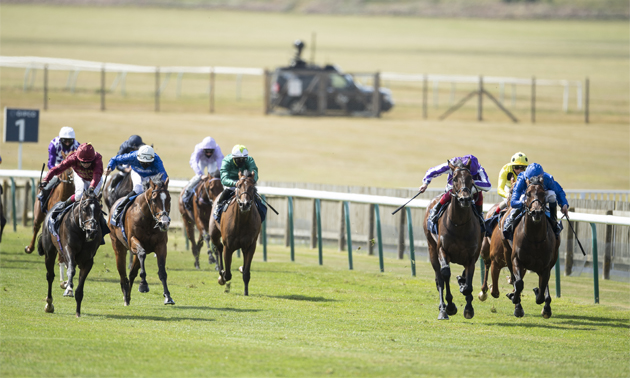 Adam Houghton looks ahead to next weekend’s Derby at Epsom, utilising Timeform data from the last 10 years to see how the 2020 contenders measure up in this most unusual of years.

This is anything but a normal year for the Derby and its participants, with the race set to go ahead four weeks later than scheduled and in front of empty stands. The last point is a disappointment for racing fans left to watch the action unfold on TV, but it will also present those taking part with a different challenge, without the cauldron-like atmosphere that typically adds so much to what is designed to be the ultimate test of a thoroughbred.

As for the delay, it means that the contenders for this year’s renewal have had fewer opportunities to advance their pre-race ratings than they might have done in a normal year. For context, the average pre-race rating of the last 10 Derby winners was 118.5, a level that has already been achieved by only two of the likely runners in 2020, Kameko (128) and Russian Emperor (119p).

There is clearly still the chance for this year’s participants to take a big step forward on the day, just as Workforce did in 2010, when producing the best Derby performance of the last 10 years. With a pre-race rating of 115p, he improved to the tune of 17 lb in winning at Epsom, with his seven-length defeat of At First Sight resulting in a Timeform performance rating of 132. 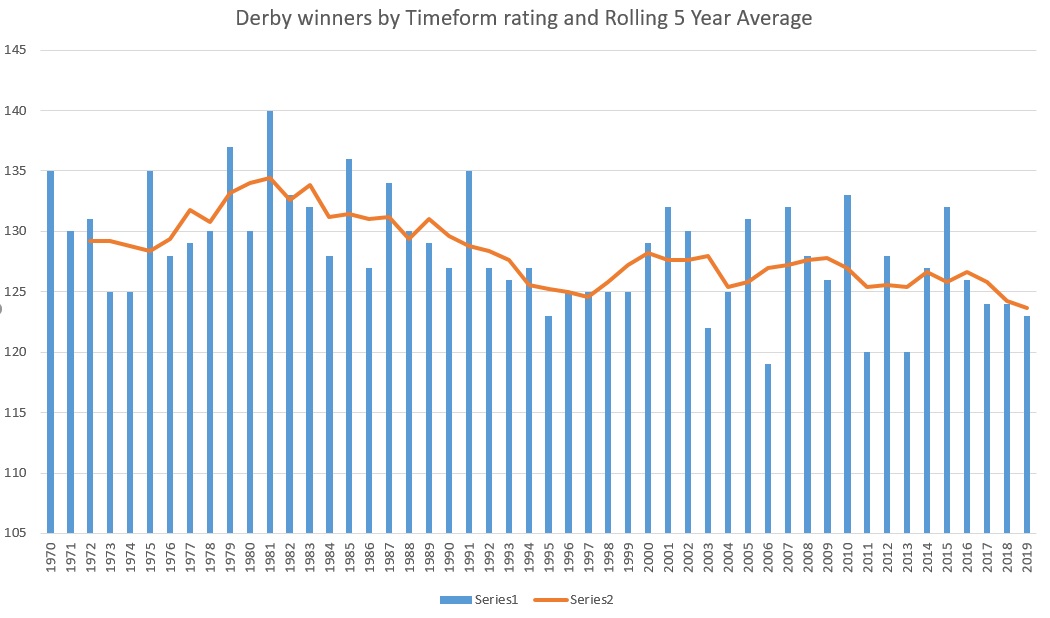 In terms of the improvement shown, the last Derby 10 winners have advanced their pre-race rating by an average of 6.9 lb in victory. Along with Workforce, Harzand (126 from 114p) and Wings of Eagles (123 from 112p) both made giant leaps forward at Epsom, whereas the likes of Masar (125 from 123) and Ruler of The World (120 from 117p) didn’t need to improve much on what they had shown previously to land the spoils.

As for this year’s race, it’s worth reiterating that all bar Kameko and Russian Emperor would have to improve by more than 6.9 lb to be considered an ‘average’ winner of the race compared to recent renewals. That is far from out of the question for several of them, however, especially those more lightly-raced sorts with the Timeform ‘p’ still attached to their rating.

2000 Guineas winner Kameko is comfortably the standout contender according to Timeform ratings, with the form he showed to beat Wichita and Pinatubo at Newmarket being more than good enough to win an average renewal of the Derby.

The big question for Kameko is whether he’ll stay the extra half a mile at Epsom. He was doing his best work at the finish at Newmarket and looks very likely to stay a mile and a quarter, but this is a step into the unknown for one who has a similar profile at this stage to the same connections’ Roaring Lion, another son of Kitten’s Joy who was a non-staying third in the Derby before proving himself a top-class performer over shorter in 2018.

Oisin Murphy spearheaded the field to beat off Wichita and Pinatubo!
#ITVRacing pic.twitter.com/rwv4hGOqM7

Russian Emperor is the highest-rated of the six possible Derby runners put forward by Ballydoyle on Thursday, with plenty to like about the way he ground out victory in the Hampton Court Stakes at Royal Ascot.

He still had a lot to do entering the straight but found plenty to get on top close home, doing well under the circumstances after he had conceded first run to the placed pair. His strength at the finish suggests he’ll relish stepping up to a mile and a half, and, with further improvement on the cards, he rates a big player.

The runner-up First Receiver (115p) and third Berlin Tango (116) both produced smart efforts in defeat, the latter under a 4 lb penalty, but they make less appeal as Derby contenders, primarily due to trip concerns.

It was hard not to be impressed by the performance English King produced to land the Derby Trial at Lingfield earlier this month, emerging as a well up-to-scratch winner of the race won by Anthony Van Dyck en route to Epsom glory in 2019.

Always travelling strongly towards the rear of the field, English King was still on the bridle when looming up to challenge a furlong out, ultimately forging clear to win readily by two and three quarter lengths. He has been well found in the market at this stage, but the booking of Frankie Dettori is a plus for one who looks sure to have more to offer.

Very impressive from English King in the Stradivarius colours 🙌

He wins the Betsafe Derby Trial Stakes at Lingfield Park

Vatican City ran a huge race on just his third start to fill the runner-up spot behind Siskin in the Irish 2000 Guineas at the Curragh, where he would have given the winner even more to think about had the gaps arrived when he wanted them.

The way he flew home once in the clear suggests a mile and a quarter will be well within his range, but, like Kameko, whether he’ll stay mile and a half is open to debate. In any case, he has yet to show everything he has to offer and can boast a pedigree worthy of any classic winner, being a brother to several Group 1 winners, including Gleneagles, who won both the 2000 Guineas and Irish 2000 Guineas in 2015.

Two places behind Vatican City at the Curragh was stablemate Armory (113), who was also coming home strongly but possibly has less scope for improvement after eight starts (also has the option of the Prix du Jockey Club).

Highland Chief is as big as 40/1 for the Derby, but he has the potential to outrun those odds on the evidence of his success in the Golden Gates Handicap at Royal Ascot, where he defied top weight with a smart performance on just his fourth start.

Still with only two behind him entering the straight, he mounted an irresistible charge down the outside that carried him to the front inside the final 50 yards, showing he's still got some learning to do as he edged left late on. This is clearly much tougher, but he remains with potential and is certainly well worth his place in the line-up.

Pyledriver caused a surprise when winning the King Edward VII Stakes at Royal Ascot, a race that rather muddied the waters in terms of the Derby picture, with hot favourite Mogul (110p), who had been touted as the leading Epsom contender for Ballydoyle, managing only fourth.

The winner was well on top at the finish but will surely need to improve to play a hand in the finish here. Similar comments apply to Mogul, though it would be a surprise if he didn’t at least reverse the placings with Pyledriver. He was thought to be in need of the run at Ascot and it’s worth remembering how strong an impression he made with middle-distances in mind at two.

Pyledriver holds off a late challenge to take a fairytale win in the King Edward VII Stakes at @Ascot pic.twitter.com/1tnDg4iev8