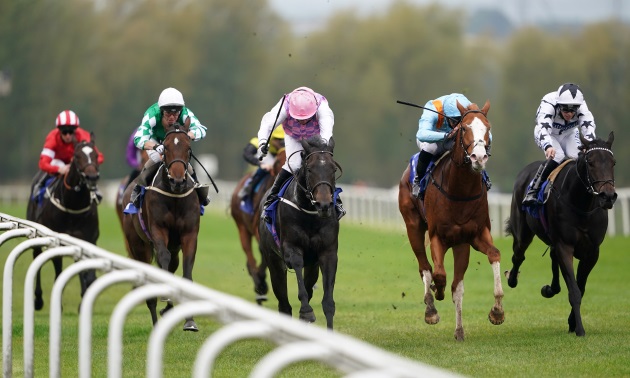 The Silver Tankard Stakes (14:20) at Pontefract on Monday is available as a free Race Pass, which means you can view all our premium comments and ratings.

12 runners are set to go to post for the Silver Tankard Stakes (14:20), the feature event on Monday’s card at Pontefract.

Westover (109p) sets the standard on Timeform’s weight-adjusted ratings as he makes his third career start for Ralph Beckett, who is seeking his third success in this race since 2015. Beckett also has the ‘Hot Trainer’ Flag to denote that his yard is in top form.

Westover shaped better than the bare result when second in a minor event at Newbury last month, being forced to deliver his challenge from further back than ideal in a steadily-run affair. He also showed signs of inexperience under pressure, but the way he finished his race was encouraging, staying on well to be beaten a little over two lengths.

That performance earned Westover the ‘Horse In Focus’ Flag, identifying him as a horse to keep on the right side the next time he runs. He also earned the ‘Sectional’ Flag having clocked the best time for the final four furlongs. With further progress on the cards, he looks sure to take plenty of beating under Ryan Moore.

Of the rest, Sweeping (108) has shown useful form in five starts to date but could be vulnerable to improvers. Grenoble (103p) and Approachability (102p) are two likely examples having finished first and second, respectively, in a novice event at Nottingham last time.

Grenoble built on the promise of his debut to get off the mark at Nottingham, proving well suited by the emphasis on stamina as he stayed on strongly to land the spoils by a length and a quarter. He remains open to more improvement and has the makings of a smart middle-distance prospect for William Haggas, who also has the ‘Hot Trainer’ Flag.

Approachability made a successful debut over this course and distance in September before filling the runner-up spot at Nottingham last time. It's worth pointing out that Approachability was conceding 6 lb to Grenoble on the last occasion, so there is unlikely to be much between the pair this time off level weights, particularly as he too is likely to progress further.

Ralph Beckett has a good record in this listed event and his Westover can add to that after posting a fairly useful second at Newbury when still looking far from the finished article. Both Grenoble and Approachability have better days ahead of them too and will ensure Beckett's promising Frankel colt doesn't have things all his own way in a fascinating juvenile contest.

Just click here to view the full card and Timeform analysis for the 14:20 at Pontefract on Monday. You can subscribe to Race Passes to access every race here.