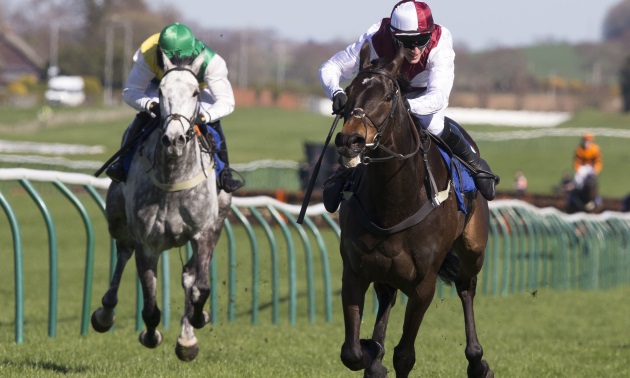 Timeform’s John Ingles previews the Scottish Grand National at Ayr on Sunday and picks out his best bet.

Only one horse trained north of the border has managed to win the Scottish Grand National since 1982. That was Merigo, trained by Andrew Parker, who was successful in 2010 and again two years later. But there’s a very good chance that Scotland’s biggest jumping prize will be staying at home again this year as several Scottish yards are represented in Sunday’s race with some leading contenders among them.

They include the favourite at the time of writing, Aye Right, who certainly wouldn’t be winning out of turn for Harriet Graham. He has been placed in all five of his chases this season, including the Charlie Hall at Wetherby, the Ladbrokes Trophy at Newbury, the Sky Bet Chase at Doncaster and, most recently, the Ultima at the Cheltenham Festival. The Ladbrokes Trophy was his first time in a big-field handicap and he coped really well in finishing 10 lengths second to Cloth Cap, though time showed that he faced a near-impossible task trying to give a stone to the winner. He ran creditably again in the Ultima when third to Vintage Clouds and Happygolucky, the latter successful since at Aintree, when not ridden as positively as he usually is. Aye Right looks an ideal type for this contest, though his excellent efforts have resulted in him creeping up the handicap and he’ll be giving weight to most if not all his rivals. Only Lake View Lad is above him in the weights, though it remains to be seen if he’s turned out again quickly after his heavy fall at the first at Aintree last weekend.

If at first you don’t succeed, try, try, try again!

Lucinda Russell has won the Grand National at Aintree with One For Arthur and her best hopes of landing the Scottish version for the first time lie with novice Mighty Thunder. Twice successful on heavy ground at Hexham earlier in the season, he has proved himself a thorough stayer in handicaps over four miles plus on his last two starts, winning the Edinburgh National at Musselburgh by 20 lengths before being caught close home by the well-handicapped Time To Get Up in the Midlands Grand National at Uttoxeter last time. Whilst guaranteed to get the trip, Mighty Thunder might find conditions on the quick side at Ayr. Stable-companion Big River was fifth in the most recent Scottish Grand National two years ago on firmish ground, but he too would appreciate much softer conditions.

Sandy Thomson is another Scottish trainer with a couple of entries. Lightly-raced novice The Ferry Master progressed well before the turn of the year, winning at Kelso and Newcastle, and had excuses on his more recent start at Haydock, but the stable’s best chance looks to be with new recruit Dingo Dollar. He was ante-post favourite for the 2019 Scottish Grand National but was taken out on the day when the ground firmed up. He subsequently became disappointing for Alan King but slipped down the weights as a result. But he was well backed on his debut for his new yard at Newcastle last month and won accordingly in a first-time tongue tie. Clearly revived by a change of scenery, Dingo Dollar still looks on a competitive mark following that 10-length success and he looks the one capable of keeping the prize at home.

Jumping them silly! Dingo Dollar pings the last to win for the first time in over three years, doing the business on stable debut for @LambdenRacing and @mania450 at @NewcastleRaces pic.twitter.com/2msVbKFETK

Others trained north of the border to mention are Claude And Goldie, something of a Kelso specialist for Sandy Forster but lightly raced for a 12-year-old, and the Iain Jardine-trained pair Cool Mix and Dino Boy. Cool Mix was third in the Rehearsal Chase at Newcastle earlier in the season but is a doubtful stayer, while Dino Boy, winner of the Scottish Borders National at Kelso over four miles in heavy ground in December and carrying the ‘Merigo’ colours of Raymond Anderson Green, looks like being out of the handicap at the foot of the weights.

Vicente is the most recent dual winner of the race and his trainer Paul Nicholls’ best chance of winning it again looks to be with novice Soldier of Love who is on a competitive mark. He hasn’t been seen since pulling up in heavy ground at Cheltenham in November, but he ran up a four-timer on much better ground earlier in the season, including when beating the subsequent Paddy Power Gold Cup winner Coole Cody at Newton Abbot, and he looks a danger back from a break under similar conditions. Nicholls’ other two entries Highland Hunter, also a novice, and Truckers Lodge, weren’t beaten that far when fifth and seventh respectively in the Midlands Grand National last time (which the latter won last season), but both would want softer ground.

Fantastic ride! Time To Get Up stays on bravely to take the feature Marston’s 61 Deep Midlands Grand National for favourite backers under @JJONeillJnr for @JonjoONeill at @UttoxeterRaces pic.twitter.com/x5Yk3a4Jya

The going is the main concern for another of those prominent in the betting, Sam's Adventure. He has done all his winning for Brian Ellison on soft or heavy ground, including last time when relishing the marathon trip of the Eider at Newcastle. Softer conditions would almost certainly suit Alan King’s entry Notachance, winner of the Classic Chase at Warwick in January but whose good run of form ended abruptly at Haydock last time.

Vintage Clouds has already been mentioned, his win in the Ultima, when fitted with cheekpieces for the first time, coming at the fifth attempt in that race. He’s also a regular in this contest, however, with his best placing from three appearances being his third place in 2018. If the headgear works a second time he has prospects of rewarding each-way support again.

Finally, it's probably wise not to overlook the Irish challenge, even though it’s not on the scale of the one which dominated last week’s Grand National, especially as both Eurobot for Noel Meade and the lightly-weighted Mister Fogpatches for Pat Fahy are on competitive marks. Novice Eurobot only got as far as the first in the Irish Grand National earlier in the month, but his dam L’Aventure won the Welsh version so he’s certainly bred for marathon trips. Mister Fogpatches is harder to make a case for, however, as he is still a maiden over fences and hasn’t convinced with his jumping for a race as competitive as this.

Nothing stands out at the weights the way Cloth Cap did at Aintree last weekend but in an open race Dingo Dollar is taken to confirm his revival for his new stable, while a good case can also be made for Soldier of Love and Aye Right.

Wednesday 05 May Go to full race