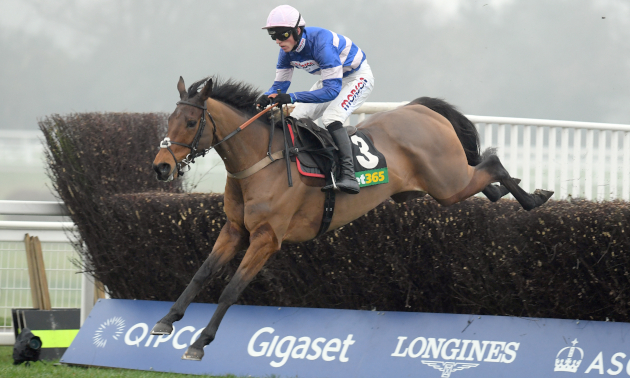 Timeform's Adam Houghton highlights the key action to look forward to in Britain on Saturday.

The highest-rated horse in Britain on Saturday

Cyrname has produced four top-class performances during his career, including when beating Waiting Patiently by 17 lengths in the 2019 edition of this race. Admittedly, a lot of water has passed under the bridge since then – Cyrname won only once last season and ended the campaign by taking a heavy fall at the last when already beaten in this race – but he showed that he is still very much a force to be reckoned with when winning the Charlie Hall Chase over three miles at Wetherby on his reappearance, just needing to be nudged out to give 2 lb and a two-length beating to Vinndication. The style of that success made his below-par effort when strongly fancied for the King George VI Chase at Kempton last time even more galling, but he was spared a hard race by Harry Cobden once it became apparent he wasn’t going, quickly being pulled up on the home turn. It’s clearly a concern that no excuse for that tame performance has come to light, but it’s interesting that he’s now being fitted with cheekpieces back over a course and distance where he has a good record (three wins from four starts). With a Timeform master rating of 169, there is no doubt Cyrname is the most talented horse in this race if the headgear puts a spring back in his step.

What a performance from Cyrname! 😲

He storms away to win the Grade 1 @Betfair #Ascot Chase in fine style! pic.twitter.com/NJ5Ysx0Ydr

Invincible Swagger is bred to be smart, being by Invincible Spirit and a half-brother to the listed winner Gold Wand, and he duly looked a good prospect when overcoming considerable greenness to make a winning debut in a maiden at Kempton last month. He dwelt at the start and needed to be pushed along as he ran green on the home turn and into the straight, seemingly going nowhere and hitting a high of 40 in-running. However, it was impossible not be taken with the way Invincible Swagger then picked up when getting daylight towards the inside rail with two furlongs to run, staying on strongly to lead inside the final 50 yards and ultimately winning by a length and a quarter from Join Forces, who hit a low of 1.08 in-running and still had five lengths to spare over the rest of the field at the line. Invincible Swagger’s strength at the finish suggests he’ll have no problem staying a mile, while the large ‘P’ attached to his Timeform rating (88P) denotes that he is open to significant improvement with that experience under his belt. He is fancied to defy a penalty to maintain his unbeaten record in this minor event on the way to bigger and better things.

How about this for a debut?! 👏

It looked unlikely for a long way, but Invincible Swagger - half-brother to the stable's smart Gold Wand - looks a prospect and strikes for @varianstable at @kemptonparkrace pic.twitter.com/70y6y11R4X

The juvenile hurdle on Saturday’s card at Haydock looks a potential match between Monmiral and Nassalam, both of whom have already achieved a useful level of form. Monmiral barely needed to come off the bridle when winning a Grade 2 at Doncaster in December and remains with potential, but preference is for Nassalam, who has the higher Timeform rating of the pair after confirming his earlier promise with a good second in the Finale Juvenile Hurdle at Chepstow last time. That Grade 1 represented a much stiffer test of Nassalam’s credentials than when demolishing lowly rivals in two previous starts at Fontwell, and he arguably deserved extra credit at Chepstow given that he was the one in closest pursuit of Bannister, who set a fierce gallop in the early stages. Nassalam stuck to his task well under the circumstances to be beaten only two and a half lengths behind Adagio, with the first two pulling 20 lengths clear of the rest in an excellent time (considerably quicker than the two later races on the card over the same course and distance). Indeed, a timefigure of 137 suggests Nassalam was full value for the useful performance he was credited with at Chepstow, while the small ‘p’ attached to his Timeform rating indicates that he may yet prove capable of better still.

Sojourn has returned better than ever this season, making a winning reappearance at Carlisle in November and then running at least as well in defeat from an 11 lb higher mark in the Tommy Whittle Handicap Chase at this course the following month. He was held up in the early stages at Haydock, which probably didn’t play to his strengths given that his bold jumping had looked one of his strongest assets previously. He still had every chance when jumping to the front four out but couldn’t withstand the challenge of Sam’s Adventure in the straight, ultimately being beaten four lengths into second. Nevertheless, there were still plenty of positives to take out of that race with a view to his run in the Grand National Trial at Haydock on Saturday, once again proving himself very effective in testing conditions and leaving the impression that a further 2 lb rise in the weights won’t be enough to stop him winning more races over fences. He is certainly open to further progress after only four starts in this sphere, while the extra couple of furlongs are unlikely to hold any fears for him in a race that invariably develops into a gruelling test.

Sam's Adventure toughs it out to land the £40,000 @Betfair Tommy Whittle Handicap Chase, bouncing back to form under Brian Hughes for @BERacingLtd at @haydockraces pic.twitter.com/h6tT3TJhVj

Myseven is improving all the time and was value for extra when making it four from four on the all-weather over this course and distance last month. She raced keenly on the heels of the leaders through much of the early exchanges and then found herself short of room over two furlongs out, encountering interference that caused her to be shuffled back and left with plenty of ground to make up. The runner-up Furzig hit a low of 1.05 in-running having appeared to have stolen a march, but Myseven found plenty where it mattered and was produced to lead in the final strides, with her apprentice jockey having to resort to no more than hands-and-heels riding. The official winning margin was just a neck but Myseven can almost certainly have her effort marked up given everything that went on before, also showing a cracking attitude to prevail. She remains very much a filly to be positive about and should mount a bold bid to defy a 6 lb higher mark, with a 2 lb swing in the weights unlikely to be enough for Furzig to reverse the placings.

Myseven and young @_will_humphrey_ were done no favours in the run, but still win relatively snugly at @LingfieldPark for Simon and Ed Crisford... pic.twitter.com/OnDc4claqZ

Philip Hobbs underlined his return to form with a double at Sandown last weekend, including Sporting John’s Grade 1 victory in the Scilly Isles Novices’ Chase, and the trainer will be hopeful of continuing the good run with nine runners spread across three cards on an action-packed Saturday.

Stable jockey Richard Johnson heads to Ascot where his three rides for Hobbs include Jerrysback in the ‘My Oddsboost’ On Betfair Swinley Chase (14:25). Jerrysback looks to hold leading claims, too, having shaped as if retaining all his ability after 13 months off when third behind Dashel Drasher at the same course last time, staying on gradually to be beaten only five lengths (fared best of those held up). He’s likely to be suited by the return to three miles and looks on a good mark judged on the balance of his form. Hobbs also runs Musical Slave in the same race, while Pileon shouldn’t be underestimated when he lines up in the Betfair Cheltenham Free Bet Pot Builder Handicap Hurdle (15:00). He hasn’t taken to chasing this season but remains with potential if putting those efforts behind him now back over hurdles.

Meanwhile, Everglow is perhaps Hobbs’ best chance of a winner away from Ascot on Saturday. He shaped well amidst inexperience when seventh on his handicap debut in the Lanzarote Hurdle at Kempton six weeks ago, never managing to get on terms in a much more competitive race than when opening his account in a novice at Ascot the previous month. He now tackles three miles for the first time and is well worth another chance to prove himself on a fair mark in the Pertemps Network Handicap Hurdle (15:50) at Haydock.