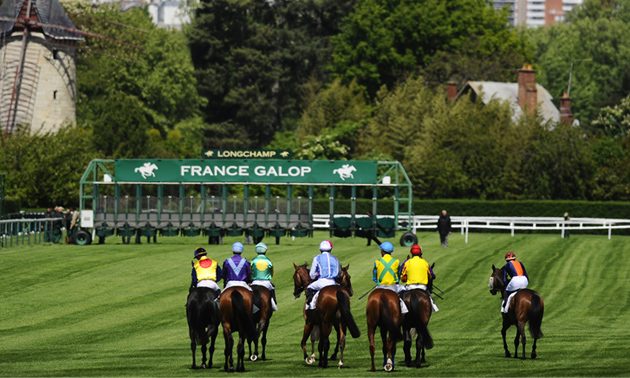 The Prix de l'Arc de Triomphe (15:05 UK time) at Longchamp on Sunday is available as a free Race Pass, which means logged-in customers can view all our premium comments and ratings.

A maximum field of 20 will line up for Europe’s richest race, the Prix de l’Arc de Triomphe at Longchamp, at 15:05 UK time. The most notable absentee is Baaeed, whose connections have opted for the Champion Stakes later in the month, while some other intended runners have failed to make the cut, controversially so in the case of Melbourne Cup winner Verry Elleegant. That leaves an open-looking Arc with no real top-notchers perhaps but plenty of high-class performers separated by very little on adjusted Timeform ratings.

Golden Horn is the only three-year-old colt to have been successful in the last ten years but runners of that age and sex, who formerly had an excellent record in the race, look the ones to concentrate on in this year’s contest.

Luxembourg (136p) had to miss much of the first part of the season through injury after finishing third in the 2000 Guineas but he has won both his starts since and produced a high-class performance to win the Irish Champion Stakes at Leopardstown last time, showing battling qualities and also proving strong at the finish which suggests the step up to a mile and a half is unlikely to hold any fears for him. Beaten only once in six starts, proven on soft ground and with Aidan O’Brien having the ‘Hot Trainer’ flag, he’s entitled to plenty of respect with further improvement to come.

But less than two lengths back in third at Leopardstown was Vadeni (135) who is fancied to turn the tables on Luxembourg. He too steps up in trip and wasn’t seen to best effect last time, finding himself stuck in a pocket early in the straight and having to weave his way through before finishing with running left in him. The Jean-Claude Rouget-trained colt made a big impression in the summer, coming home five lengths clear in the Prix du Jockey Club at Chantilly before putting up another high-class performance to win the Eclipse at Sandown with a fine turn of foot from the back of the field. His jockey Christophe Soumillon can make the headlines for all the right reasons this time.

Splitting Luxembourg and Vadeni at Leopardstown was another French colt, Onesto (135), and he makes each-way appeal again after going down by just half a length after edging ahead briefly in the final furlong. Ridden from well off the pace in all his starts, which means he’ll need some luck in running if he’s ridden the same way in this big field, Onesto was a never-nearer fifth behind Vadeni in the Prix du Jockey Club before stepping up in trip to win the Grand Prix de Paris over the Arc course and distance, earning the ‘Horses For Courses’ flag, and that form has worked out well.

Also making each-way appeal is the Sir Mark Prescott-trained Alpinista (135), an admirable mare who goes to Longchamp unbeaten in seven starts since the beginning of last year, with the last five of those wins coming at the top level. She’s proved at least as good as ever this term, winning the Grand Prix de Saint-Cloud on her return in June and then showing a good attitude to beat the Oaks winner Tuesday by a length in the Yorkshire Oaks last time.

However, it’s Alpinista’s 2021 form which really advertises her chances here as she beat both German contenders Torquator Tasso (137) and Mendocino (130) on their home turf in Group 1 contests last year. Torquator Tasso went on to pull off a shock win on soft ground in last year’s Arc – conditions might not be too dissimilar this time – but was turned over at odds on by outsider Mendocino in a muddling race when bidding to win the Grosser Preis von Baden for the second time at Baden-Baden four weeks ago. Torquator Tasso earlier had three of these rivals behind him when runner-up in the King George VI & Queen Elizabeth Stakes at Ascot but a wide draw won’t make a successful defence of his title any easier.

Third in the King George was Mishriff (137) for the ‘Hot Trainer’ team of John & Thady Gosden. He can boast better form than many of these, with his best effort this year coming when running Vadeni to a neck in the Eclipse despite being hampered. But conditions will be very different here and he was only fourth in the Irish Champion Stakes last time, while he’s another with a high draw to deal with. He has cheekpieces on for the first time.

Three-year-old Westover (134) disappointed badly in the King George after racing freely but had looked a most promising colt until then, keeping on well for third in the Derby after a troubled passage and then forging clear for a seven-length win in the Irish Derby, though that form has taken some knocks since.

The annual Japanese challenge is the largest yet, with four contenders from the Far East, headed by Titleholder (138) whose Japanese form gives him every chance assuming he handles much softer conditions than he’s used to. He’s versatile trip-wise, successful in the Japanese St Leger last year and the winner of further Group 1 contests over two miles, and then eleven furlongs, on his last couple of outings this year when better than ever. Last time, in the Takarazuka Kinen at Hanshin in June, he had both Deep Bond (133) and Stay Foolish (131) behind him when breaking the track record. This year’s Japanese Derby winner Do Deuce (129) has improvement to find and shaped as though needing the run in the Prix Niel here three weeks ago.

The other two British-trained runners Alenquer (133) and Mostahdaf (131) have won the Tattersalls Gold Cup and September Stakes this year for William Haggas (another ‘Hot Trainer’) and the Gosdens respectively, but they’re among several of the remainder for whom victory would come as a surprise.

In the absence of superstar Baaeed, there's an open look to this year's Arc and Vadeni, so impressive when landing the Prix du Jockey Club at Chantilly in June, is taken to emerge on top. He wasn't seen to best effect behind Luxembourg and Onesto at Leopardstown and there could be more to come from him now upped to 1½m. Luxembourg is also likely to benefit from this step up in trip and he is greatly respected, while the admirable mare Alpinista and Onesto both make serious each-way appeal.