Names to note: Six stars to watch out for this weekend 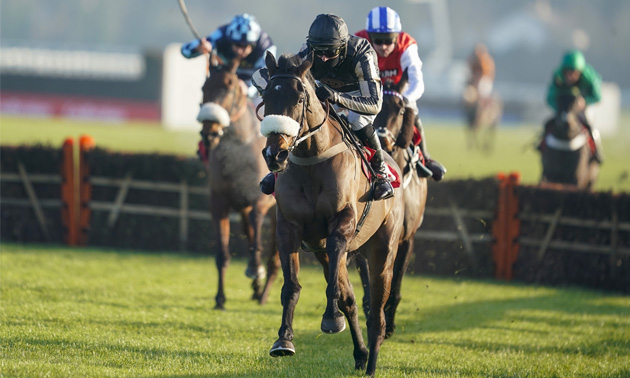 Gordon Elliott has had a stranglehold on the juvenile hurdle division this season and his strong squad is headed by leading Triumph Hurdle fancies Quilixios (Timeform rating 143p) and Zanahiyr (141p). Elliott could have another smart prospect on his hands in Teahupoo, who was arguably lucky to win on his first start for the yard at Fairyhouse last month but is still a four-year-old to view positively. Teahupoo beat Good Ball - a subsequent winner for Paul Nicholls - on his only start in France and he looked set to give Youmdor a race at Fairyhouse before that rival came down at the last when travelling powerfully.

Teahupoo looked like coming off second best, though it's by no means certain as he stayed on strongly after his rival departed, pulling 15 lengths clear of the runner-up. The bare form of that leaves Teahupoo with a stone to find with the big guns in the division, so perhaps the Boodles Juvenile Handicap Hurdle - which Elliott won last year with Aramax - might be on the agenda. Teahupoo needs another run to qualify, and he should take plenty of beating on Saturday, unless one of Willie Mullins' hurdling debutants proves something out of the ordinary.

Drama! Teahupoo is gifted victory after the favourite Youmdor falls at the last in the @IREthoroughbred Virtual Stallion Trail Hurdle for @Robbie_Power_ and @gelliott_racing pic.twitter.com/2K13KYNYxx

Paul Nicholls has won the Pendil Novices' Chase ten times this century, most recently with Cyrname in 2018, who headed straight to the Manifesto Novices' Chase at Aintree afterwards. Hitman looks set to follow a similar path as Nicholls is keen to give this tall, developing five-year-old a relatively easy time of things during such an early stage of his career. You can understand why Nicholls is keen to mind Hitman as he looks like a smashing long-term prospect. He could hardly have created a better impression when bolting up by 30 lengths in a novice chase at Ffos Las on his first start for the yard, and he confirmed that promise when chasing home Allmankind having been fast-tracked into Grade 1 company in the Henry VIII Novices' Chase at Sandown. The winner has since advertised the strength of that form, while Hitman himself was in the process of running well on his only subsequent start in the Scilly Isles Novices' Chase but fell in the back straight when travelling powerfully. His second to Allmankind makes him the one to beat on these terms and he can show why he is held in such high regard.

Alan King has won the Adonis Juvenile Hurdle on four occasions, including in 2005 with Penzance, who followed up in the Triumph Hurdle at the Cheltenham Festival. Tritonic will attempt to complete the same double this year and he established himself as one of the leading British juveniles with a game success at Ascot last month. Tritonic showed useful form on the Flat, notably finishing runner-up in the Golden Gates Handicap at Royal Ascot, and there haven't been many higher-rated recruits to the juvenile hurdle division in recent seasons. Tritonic showed that he has the tools to make his mark as a hurdler at Ascot, displaying an excellent attitude and plenty of stamina to overturn a three-length deficit on the run-in. That effort identifies him as the one to beat in the Adonis - he is also entered against older horses in the Dovecote - and he is an exciting prospect open to further improvement.

He got there! Tritonic was placed at Royal @Ascot and runs down long-time leader Casa Loupi to win on hurdles debut at the track for @adrianheskin, Alan King and @McNeill_Family… pic.twitter.com/rA3FKF8Hqf

There won't have been many winners of the Irish Cesarewitch who landed that valuable handicap as easily as Cape Gentleman managed in October. That was Cape Gentleman's handicap debut and he made a mockery of his opening mark on just his second start for Emmet Mullins, creating a deep impression with how smoothly he travelled and how readily he quickened a couple of lengths clear. That identified Cape Gentleman as an interesting recruit to hurdling and he made the perfect start over two and a half miles at Punchestown in December, not needing to come off the bridle to beat his main market rival. That earned him a shot at Grade 1 company at the Dublin Racing Festival but he shaped as if amiss when pulled up behind Gaillard du Mesnil after folding tamely. It's far too soon to be writing him off, however, and, while others in the Dovecote have achieved much more on the bare form, Cape Gentleman has not shown the limit of his ability over hurdles. The drop back to two miles won't pose a problem based on how much pace he showed in the Irish Cesarewitch.

How impressed were you with that performance?

Cape Gentleman justifies short-price favouritism, and gets off the mark at the first time of asking, over hurdles - cruising to success under @BrianHayesb, for Emmet Mullins. pic.twitter.com/ZuwqVlQJmu

Burrows Saint needs to run in a chase to qualify for the Grand National, which has presumably been the long-term target for the 2019 Irish Grand National winner. He should get the chance at Fairyhouse on Saturday in the Bobbyjo Chase, a race Mullins has won for the last five seasons, including in 2019 with Rathvinden, who went on to finish third at Aintree. This may not be the cup final for Burrows Saint but he is likely to go close in any case given the talent he possesses. He was ultimately beaten a long way in the Galmoy Hurdle at Gowran Park last month but he shaped much better than the result would suggest having been in touch until blundering at the second-last, and he should have come on again for that outing. He has been handed a fair weight for the Grand National and it will be interesting to see if he advances those claims at Fairyhouse.

Burrows Saint is all class under Ruby Walsh in the @BoyleSports Irish Grand National in a 1-2-3 for Willie Mullins! @Fairyhouse

The National Spirit Hurdle often suffers due to its proximity to Cheltenham but Sunday's edition could be a cracker if most of those entered stand their ground. Brewin'upastorm capitalised on a drop in grade to win on his return to hurdling last month and he will have his supporters in receipt of 6 lb from his main rivals, but McFabulous is on an upward curve and can give the weight away. McFabulous, a smart bumper performer, took time to find his feet over hurdles last season but ended his campaign on a high with an authoritative success in the rearranged EBF Final at Kempton.

He easily brushed aside some useful opponents on his reappearance in the Persian War Novices' Hurdle at Chepstow and then emerged with plenty of credit when chasing home Thyme Hill and Paisley Park on his first crack at three miles in the Long Distance Hurdle at Newbury in November, just finding the trip beyond him. He confirmed the impression he'll be better off campaigned at around two and a half miles when justifying short-price favouritism in the rescheduled Relkeel Hurdle at Kempton and he is a force to be reckoned with at this intermediate trip. He can win this to set up a tilt at the Aintree Hurdle.