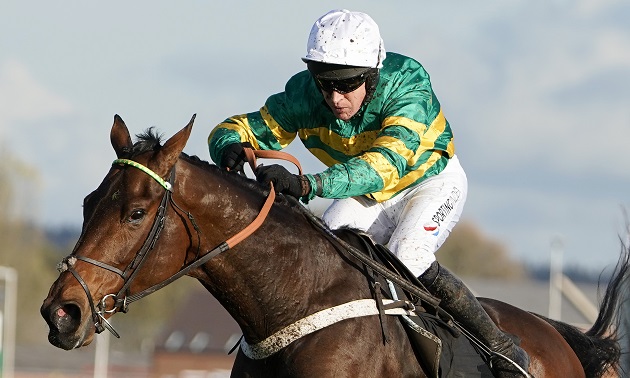 The Long Distance Hurdle (15:05) at Newbury on Friday is available as a free Race Pass, which means logged-in customers can view all our premium comments and ratings.

The highlight on the opening day of Newbury's Coral Gold Cup meeting is the Long Distance Hurdle (15:05) and Timeform's weight-adjusted ratings for the Grade 2 event are narrowly headed by Champ (170) based on the form he showed when winning the Long Walk Hurdle at Ascot on his reappearance last season.

Champ had been a high-class operator over fences but, after receiving treatment for a back problem which came to light after he was quickly pulled-up in the 2021 Cheltenham Gold Cup, connections opted to start him off over hurdles in the Long Walk last season.

That was a good edition of the Long Walk, featuring the main players in the British staying hurdle division, but Champ proved too strong, passing the post a length and three-quarters clear of Thyme Hill with the previous season's winner Paisley Park a further three and a half lengths back in third.

That dominant display persuaded connections to persevere over hurdles, but he failed to kick on in three subsequent starts, finishing runner-up behind Paisley Park in the Cleeve Hurdle before coming home a place behind that rival in fourth in the Stayers' Hurdle. He was well below his best when a distant third in the Aintree Hurdle on his final start of the campaign, racing awkwardly before merely plugging on past beaten rivals late on, but he has an excellent record when fresh so it's possible he will have benefited from a break and can get back to the sort of level that saw him land the Long Walk.

Paisley Park (169) is no longer the force who dominated the division in the 2018/19 season, but he showed last season that he remains capable of very smart form. He was disappointing on his first couple of outings last term, including in this event when seemingly fired up by the application of cheekpieces, but he took a step in the right direction when third in the Long Walk and built on that to reverse form with Champ in the Cleeve Hurdle, despite forfeiting ground after whipping around at the start.

Paisley Park produced arguably his best effort of the campaign when third in the Stayers' Hurdle, again impressing with his strength at the finish up the hill, and he has the form to make an impact if fully revved up on his reappearance.

Proschema (166) has race fitness on his side as he built markedly on his reappearance effort in the Silver Trophy when landing the West Yorkshire Hurdle at Wetherby last month.

That was a big career-best effort from Proschema who travelled powerfully in rear and sprinted right away from his rivals after hitting the front at the final flight, pulling ten lengths clear on the run-in. Proschema was seen to good effect at Wetherby as a steadily-run race on decent ground placed the emphasis on speed and allowed him to use his turn of foot, but he's also likely to encounter a sound surface at Newbury and another bold showing is on the cards.

Thomas Darby (165§) won this race 12 months ago, finding more at the finish than is usually the case, though the race was set up for him to some extent and his task was made easier by a couple of leading fancies failing to meet expectations. He ran to a higher level on Timeform's figures when fourth in the Long Walk, but he was disappointing on his final couple of starts last season, pulling up in the Rendlesham and finishing a distant fourth in the Liverpool Hurdle.

Thomas Darby ran respectably when runner-up behind Proschema on his reappearance in the West Yorkshire Hurdle last month - his first start since undergoing a breathing operation - but looked typically ungainly under pressure and was left behind on the run-in. This promises to be a better edition of the Long Distance Hurdle than he won last season.

One who tends to find plenty for pressure is the likeable front-runner Dashel Drasher (168). He has largely been campaigned over fences in recent seasons - he landed the Grade 1 Betfair Ascot Chase in February 2021 - but he made a successful switch to hurdles in a handicap here last term and also struck in a conditions hurdle on his reappearance at Aintree a few weeks ago. Dashel Drasher was ultimately presented with a straightforward opportunity at Aintree but it should have teed him up nicely for a crack at this, and in receipt of weight from most of his rivals, he should not be underestimated.

The field is completed by Tea Clipper (160+) who has also spent time over fences in recent seasons. He ran up to his best when third in a valuable handicap chase at Ascot last time but it's likely he'll come up short in this company on his return to hurdling.

The classy Champ wasn't on his game on his final outing last season but he usually goes well fresh, so he's worth chancing to make another successful return. Proschema looked better than ever when scoring at Wetherby on return and hasn't had much racing over 3m, so he's a big danger, while a customary strong late run is expected from Paisley Park.