Irish 1000 Guineas preview: Albigna should prove too strong for her rivals 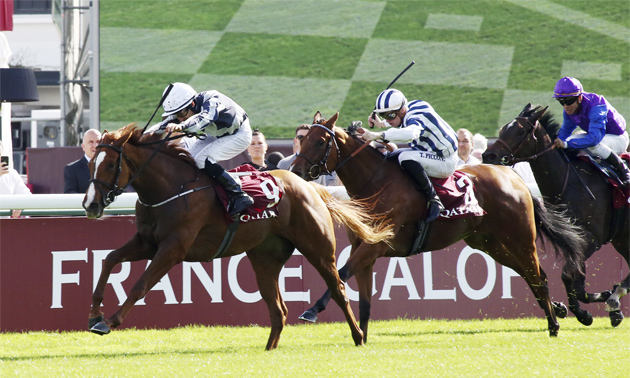 Millisle disappointed when a leading contender for last Sunday’s 1000 Guineas at Newmarket but her trainer Jessica Harrington had a notably strong team of two-year-old fillies last season and the stable has another big chance in Saturday’s Irish equivalent at the Curragh.

After winning her first two starts at the Curragh over six furlongs this time last year, Albigna failed to meet expectations when only sixth to future 1000 Guineas winner Love in the Moyglare Stud Stakes but another step up in trip resulted in her beating some of the best French fillies in the Prix Marcel Boussac at Longchamp where she saw out the mile really well. Albigna can be forgiven her final run when a never-nearer fourth in the Breeders’ Cup Juvenile Fillies Turf after getting further back than ideal and the return to this more galloping track is sure to suit her.

Albigna carries the colours of the Niarchos Family who were successful with the same stable’s Alpha Centauri in this race in 2018. That filly’s half-sister Alpine Star was another leading two-year-old for the yard last season, winning her last two starts over seven furlongs. A pulled muscle kept her off the course in the autumn, but she signed off with a game win in the Debutante Stakes at the Curragh in which Love finished only fifth. If Alpine Star makes only some of the progress her half-sister did from two to three, she’ll be one to reckon with.

Aidan O’Brien’s two-year-old fillies didn’t look to have as much strength in depth last season as they have in some years and Love’s participation at Newmarket leaves Ballydoyle with only two entries on Saturday. One of those, So Wonderful, is still a maiden, though she often kept good company last season and showed useful form, including when making the frame in both the Debutante and the Moyglare.

More of a danger could be the less exposed Galileo filly Peaceful. She gave the impression that longer trips will suit her ideally this year after strong staying performances in testing conditions last season, easily winning a maiden at Thurles before going down to Born With Pride in the listed Montrose Fillies’ Stakes at Newmarket. While the winner disappointed on her return last week, the third from that race, Run Wild, has since won the Pretty Polly at Newmarket.

Joseph O’Brien has made a habit of upstaging his father on occasions at the highest level and has several fillies to choose from, including New York Girl who beat stablemate A New Dawn a neck in the Weld Park Stakes in heavy ground here in September. That was only New York Girl’s second start and the step up to a mile looks sure to suit.

Aidan has more than just one son to worry about as a rival in the training ranks now that Donnacha has gained his licence as well. Fancy Blue was officially trained by Aidan O’Brien when winning both her starts last year, though apparently Donnacha was responsible for much of her training. Fancy Blue is a promising filly but her narrow beating of A New Dawn in a listed race here in heavy ground in October suggested she’d be more of a middle-distance prospect this year and she’s certainly bred to appreciate further.

Soul Search is another whose maiden status belies useful form at pattern level – she too made the frame in the Debutante and Moyglare – while the Aga Khan pair Katiba and Ridenza are among several with plenty to find on form but have the potential for improvement. However, Albigna sets a good standard on last year’s form and is the one to beat with further improvement to come.

Back Albigna in the Irish 1000 Guineas at the Curragh