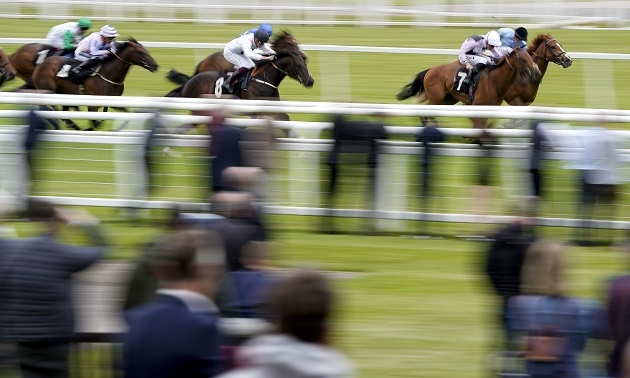 The Hungerford Stakes (15:35) at Newbury on Saturday is available as a free Race Pass, which means logged-in customers can view all our premium comments and ratings.

The Hungerford Stakes (15:35) is the only race at Newbury on Saturday that has attracted a double-figure field, with ten declared for the Group 2 feature.

Timeform's weight-adjusted ratings are headed by Pogo (124) who may be a six-year-old but has proved as good as ever this season, narrowly landing the John of Gaunt Stakes at Haydock before defying a penalty in the Criterion Stakes at Newmarket, showing an excellent atititude on both occasions.

The front-running Pogo launched a bold bid to complete the Group-race hat-trick in the Lennox Stakes at Goodwood last month, but had to settle for a close-up third in that stronger affair despite again showcasing his battling qualities. Pogo is an in-form, reliable and smart performer so looks a major player here.

Last year's Hungerford Stakes was won by the William Haggas-trained Sacred and the trainer is represented by another three-year-old this year with Tiber Flow (120).

Tiber Flow won his first three starts and then enhanced his reputation despite meeting with a first defeat when beaten a short-head by El Caballo in the Sprint Final at Newcastle. Tiber Flow didn't need to match that form to register a narrow success in a six-furlong listed race here in May and that earned him a crack at the Commonwealth Cup at Royal Ascot.

He failed to fire in first-time cheekpieces at Royal Ascot, looking a bit ungainly off the bridle, and it's no surprise to see the headgear has been quickly discarded. The step back up to seven furlongs - a trip he has already won over - also looks likely to suit Tiber Flow based on how strong he was at the finish in the Sprint Final at Newcastle, and he could still have a bit more to offer.

The Classic generation are also represented by Dubai Poet (118) and Wings Of War (116).

Dubai Poet comfortably won a novice over this course and distance last year - that earned him the Horses For Courses Flag - and he put up his best effort yet when third in the Jersey Stakes at Royal Ascot in June, coping well with the drop back to seven furlongs having raced over a mile and a quarter on his previous start. He is not yet fully exposed over seven furlongs.

Wings Of War progressed well last term and signed off for the season with a win here in the Mill Reef Stakes. He has not won since then but has posted some creditable efforts this term, including when fourth in a Group 3 at the Curragh last weekend, but he will need to find a bit more on this first crack at seven furlongs.

The only penalised runner in the field is Chindit (121) who must carry an extra 3 lb for his Summer Mile win at Ascot last month.

He was flying too high when only sixth in the Sussex Stakes last time and will be suited by this drop in grade, while the return to seven furlongs shouldn't be an issue for a horse who has a couple of Group-race wins to his name at this trip. The penalty make life tougher but he is still entitled to plenty of respect.

Chindit's trainer Richard Hannon is also represented by Happy Romance (123), a filly who holds strong claims based on Timeform's figures as only Pogo comes out ahead of her. Happy Romance ran respectably when fifth in a strong renewal of the Hackwood over six furlongs here last month - the form has worked out well - and she probably would have made the frame had she found a clear run.

She has largely been campaigned over six furlongs, but her close-up third in Saudi Arabia in February was achieved at a trip in excess of six and a half furlongs, offering hope she will prove as effective at this trip. If she does see things out thoroughly she looks a major player based on the form she showed in Saudi Arabia and when runner-up in the Al Quoz Sprint.

Double Or Bubble (121) has also been campaigned at six furlongs this season but she is a three-time winner over seven furlongs and produced a couple of smart efforts in defeat at the trip last term when runner-up in the Supreme Stakes and the Sceptre Fillies' Stakes. She is a reliable mare and arrives on the back of a sound effort in the July Cup, in which she finished fifth and fared best of those who raced towards the standside, so she holds each-way claims.

Plenty in with a shout in an open renewal of this Group 2. The front-running Pogo has thrived over 7f this summer and is the percentage call. Tiber Flow can bounce back from a lesser effort in the Commonwealth Cup and provide the chief threat ahead of Richard Hannon pair Chindit and Happy Romance.