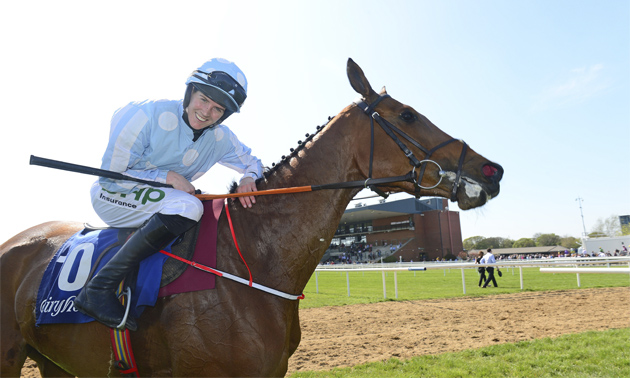 The Bar One Racing Hatton's Grace Hurdle (14:30) at Fairyhouse on Sunday is available as a free Race Pass, which means logged-in customers can view all our premium comments and ratings.

Honeysuckle now has the opportunity to go one step further by bringing up a record fourth win in this Grade 1 and she remains very much the one to beat on Timeform's weight-adjusted ratings. She is now unbeaten in 16 races under Rules having followed her victory in this race 12 months ago by winning her third Irish Champion Hurdle at Leopardstown, her second Champion Hurdle at Cheltenham and her second Punchestown Champion Hurdle.

Admittedly, Honeysuckle didn't need to reproduce her very best form to win any of those races, but that's because she was just so superior to everything else in this division. Henry de Bromhead's mare certainly has a significant class advantage over her seven rivals today – particularly with the sex allowance factored in – and she has the 'Horse For Course' Flag to underline that she is very effective under these conditions. Put simply, either she will have to underperform by some way or one of her rivals will have to make significant improvement to stop history being made on Sunday.

Willie Mullins saddles three runners as he seeks a fourth win in this race having previously won it with Hurricane Fly (2010), Zaidpour (2012) and Arctic Fire (2015). The pick of his trio this year looks to be Klassical Dream (172), who is now well established as a high-class stayer having won three Grade 1 races at around three miles over the last two seasons, including back-to-back renewals of the Champion Stayers Hurdle at the Punchestown Festival. A strong-travelling sort, he is unlikely to be inconvenienced by the drop back to two and a half miles here and his excellent record when fresh identifies him as by far the most likely to chase Honeysuckle home.

Mullins, who has the 'Hot Trainer' Flag to denote that his stable is in rude health, also saddles Echoes In Rain (168) and Saldier (162). Echoes In Rain proved at least as good as ever when filling the runner-up spot behind Honeysuckle in the latest edition of the Punchestown Champion Hurdle and since then she's developed into a smart performer on the Flat. Crucially, she's looked a thorough stayer on the level, notably going down by just a neck in the Irish Cesarewitch at the Curragh last time, so that suggests she is worth another try at this trip having disappointed slightly in the Mares' Hurdle at the Cheltenham Festival on her only previous run beyond two miles.

Saldier finished only fifth in this race 12 months ago and he continued out of sorts in two subsequent starts last season. He showed he retains plenty of ability after nine months off when third (beaten eight lengths) in the Morgiana Hurdle at Punchestown last time, but his patchy profile suggests there is no guarantee that he'll build on that effort and the balance of his form suggests he isn't really up to this level nowadays anyway.

Gordon Elliott, who also has the 'Hot Trainer' Flag, saddles Sire du Berlais (170) and Teahupoo (165) as he tries to add to Apple's Jade's three wins in this race. The 10-year-old Sire du Berlais wasn't given a hard time after seven months off when fifth in the Lismullen Hurdle at Navan three weeks ago and a repeat of the form he showed when winning the Liverpool Hurdle at Aintree in April will give him solid each-way claims.

At the other end of the age spectrum, the five-year-old Teahupoo looked a smart hurdler when completing a hat-trick in the Red Mills Trial Hurdle at Gowran in February, but his limitations at this level seemed to be exposed when he then failed to beat a single rival in both the Champion Hurdle at Cheltenham and Punchestown Champion Hurdle.

Ashdale Bob (164) finished two places ahead of Sire du Berlais in the Lismullen Hurdle, shaping as if better for the run after seven months off, his very awkward jump three out exaggerating the distance he was beaten by the first two after he'd been up with the good pace. He is a bit shy of top class but tends to give his running and ought to be right back to form this time.

The field is completed by Darver Star (161), who has been well placed to win his last three starts at a lower level. It hasn't been all plain sailing for him since he pushed Honeysuckle all the way in the 2020 Irish Champion Hurdle, but he clearly retains most of his ability at the age of 10 and shouldn't be underestimated now back up in grade, at least in the battle for minor honours.

Honeysuckle makes her eagerly-awaited return and it's very hard to envisage anything other than a comfortable success for Henry de Bromhead's unbeaten and top-class mare as she bids for a superb fourth straight victory in this event. Wille Mullins saddles three and his pair of Klassical Dream and Echoes In Rain appeal as the duo to chase home the favourite.