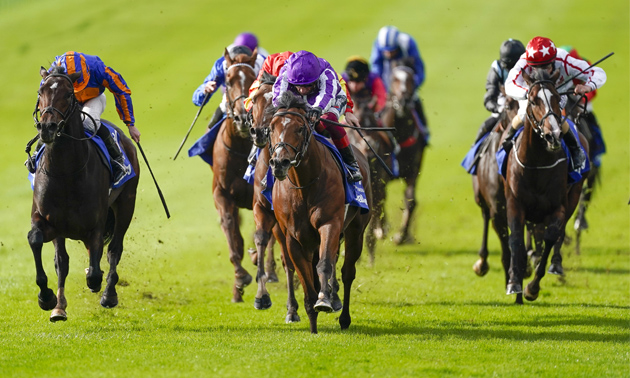 The French 2000 Guineas (14:50) on Sunday is available as a Free Race Pass, which means you can view all our premium comments and ratings.

The last two renewals of the French 2000 Guineas have gone to Andre Fabre and Godolphin and this year they are represented by Parchemin (Timeform weight-adjusted rating: 115). He won both starts by narrow margins as a two-year-old, notably beating Colosseo (118) by a short neck in a listed event at Deauville. Although he only got home narrowly on that occasion, he showed a good attitude and the first two pulled 13 lengths clear of the third.

Admittedly, that form isn’t anything of note, and Parchemin was beaten into fifth on his reappearance in the Prix de Fontainebleau won by Policy of Truth (118) over course and distance. Parchemin was a disappointing favourite that day, but left the impression he would come on for the run, still holding every chance entering the final furlong before weakening out of proceedings. It is worth remembering that Victor Ludorum, who won the race last year for Fabre, was a beaten favourite on his reappearance and came on a bundle for it, so it wouldn’t be wise to rule out Parchemin, for all he has something to find with the principals.

Policy of Truth showed useful form last season, winning a small-field Group 3 over course and distance before finishing fourth in the Group 1 Criterium International at Saint-Cloud. He barely had to improve to beat Sealiway (128) by half a length in the Prix de Fontainebleau, still in midfield on the home turn but staying on purposely to take up the lead well inside the final furlong. That was a likeable victory, and he is going the right way, but more is needed to win at this level.

Sealiway was kept busy as a juvenile, winning four of his seven starts, and he produced a smart performance when trouncing Coventry Stakes winner Nando Parrado by eight lengths in the Prix Jean-Luc Lagardere over seven furlongs at this course. Sealiway relished the heavy ground on that occasion, handling conditions much better than his rivals, leading on the bridle at the two-furlong pole and effortlessly drawing clear inside the final furlong. He is yet to reproduce that sort of form on a sound surface, though, so others are preferred in the likely conditions.

At the head of the market is 2000 Guineas winner Poetic Flare (134) and he also tops Timeform weight-adjusted ratings. The only blip in his career came when finishing down the field in the Dewhurst Stakes won by St Mark’s Basilica last season, but he should not be judged on that performance as he was coming back from a seven-month layoff on what was just his second career start.

Poetic Flare won the Leopardstown 2000 Guineas Trial on his reappearance and improved another chunk to follow in the footsteps of his sire, Dawn Approach, by scoring at Newmarket. He took a keen hold early, but was well served by the step up to a mile – he is bred more for stamina than speed – and stayed on well to shade the verdict. That is the best form on offer, but it was an open and potentially average renewal of the 2000 Guineas, so his claims aren’t bomb proof.

One horse who could potentially improve past Poetic Flare is the Aidan O’Brien-trained St Mark’s Basilica (131p). He hasn’t been seen since the Dewhurst, but was intentionally left out of the 2000 Guineas with this race listed as his main early-season target. He was always held in high regard last season – well backed favourite for the Phoenix Stakes on his second start – and belatedly showed a very smart level of form to beat stablemate Wembley in the Dewhurst.

A half-brother to Magna Grecia, the 2000 Guineas winner in 2019, he is bred to appreciate and improve for this step up to a mile and it is interesting he is O’Brien’s sole representative. St Mark’s Basilica remains with untapped potential and you would expect him to be closer to Poetic Flare in the market given he has already beaten that rival.

Archie Watson saddles Mehmento (124) who cost only €16,520 at the breeze-ups last year. He won by wide margins on his first two starts on the fibresand at Southwell earlier in the year and took a big step forward when beaten a neck by Chindit in the Greenham Stakes at Newbury last month. He did really well given his lack of experience on his first turf start, only headed in the final 50 yards after going with plenty of zest. Mehmento has quickly developed into a smart colt and there could be even more to come, so he shouldn’t be underestimated.

Another to mention is the unbeaten Breizh Eagle (123p) who improved on his two-year-old form to complete a hat-trick in an eight-runner minor event over course and distance last month. That wasn’t the strongest race, but there was plenty to like about the way he stayed on down the outside to get up close home. He needs to take another step forward to match some of these, but the small ‘p’ attached to his rating denotes he is fully entitled to.

In summary, the home team have a bit to find on form, and it is the Irish-trained duo Poetic Flare and St Mark’s Basilica who are expected to fight it out. At the prices, preference is for St Mark’s Basilica, who has had this race as his target, represents top connections and doesn’t need to improve much on his two-year-old form to topple Poetic Flare.

You can view the ratings and much more for all the runners in the French 2000 Guineas with our Free Race Pass.

Race Passes are the ultimate form guide, providing Timeform analysis, flags and ratings for every runner in every race in Britain and Ireland. Subscribers have access to additional features that add extra levels of insight, including complete performance histories, an extensive form archive and unlimited use of horse, jockey and trainer searches.

Just click here to view the full card and Timeform analysis for the French 2000 Guineas. You can subscribe to Race Passes to access every race here.