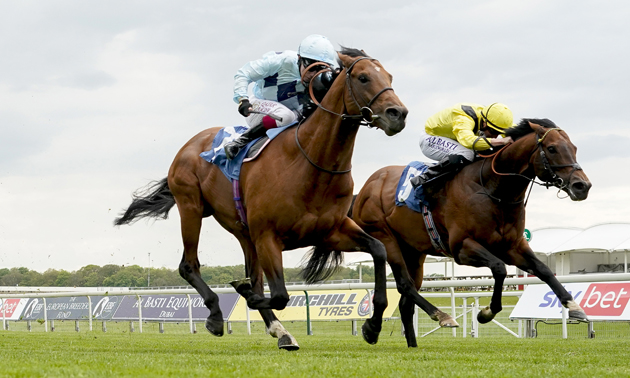 The Diamond Jubilee Stakes at Royal Ascot on Saturday is available as a free Race Pass, which means you can view all our premium comments and ratings.

The Diamond Jubilee Stakes (16:20) is the feature race on the final day of Royal Ascot, a Group 1 over six furlongs for horses aged four and above.

Starman (137) sets the standard on Timeform’s weight-adjusted ratings as he seeks a first success at the top level. He only made his debut in July last year and has come a long way in a short space of time, the only blot on his copybook coming when below form in the Champions Sprint Stakes over this course and distance in October. He got right back on track after seven months off with an excellent win in the Duke of York Stakes last time, always finding more when Nahaarr (136) came to challenge, ultimately winning by a neck with a bit in hand.

A most progressive sort, Starman earned the ‘Horse In Focus’ Flag for that performance at York and Ed Walker also has the ‘Hot Trainer’ Flag to underline that his yard in rude health. The only question mark is whether Starman can reproduce that level of form following heavy rain at Ascot on Friday. After all, his only previous defeat came on soft going and he is reportedly far from a guaranteed runner under similar conditions.

Nahaarr took his form to a new level last season, landing a gamble when winning the Ayr Gold Cup on his final start. He disappointed on his return in a seven-furlong minor event at Chelmsford but looked a high-class colt returned to sprinting when second in the Duke of York. That form is among the best on offer and the stiffer nature of this track will suit, so he must be high on the shortlist for William Haggas, who also has the ‘Hot Trainer’ Flag.

Sir Michael Stoute, Andrew Balding and David O’Meara are the other in-form trainers with runners in this year’s Diamond Jubilee. Stoute fields another leading contender in the shape of Dream of Dreams (136), who gave Blue Point a fright when finishing second in this race in 2019 and again arrived too late on the scene when filling the same position 12 months ago. He went on to prove himself better than ever during the second half of 2020, notably winning the Hungerford Stakes over seven furlongs at Newbury before gaining a first Group 1 success in the Sprint Cup at Haydock.

Dream of Dreams wasn’t at his best when well held behind Glen Shiel (131) in the Champions Sprint on his final start of 2020, but he proved his wellbeing after seven months off with an easy win in listed company at Windsor last month, asserting in the final furlong to beat Garrus (128) by two and a quarter lengths. He has the form to be a serious player and seems sure to launch another bold bid.

Glen Shiel progressed well last season, recording his fifth victory of the campaign in the Champions Sprint. He displayed a fantastic attitude to land that Group 1, but it is best to treat that form with caution given how many reopposing rivals underperformed. He left the impression he would come on for his return at the Curragh last month, but others hold more appealing claims.

Art Power (131) was fourth in both the Sprint Cup and Champions Sprint after winning the Palace of Holyroodhouse Handicap at this meeting and Lacken Stakes at the Curragh earlier in the season. He was too free when only sixth on his reappearance in the Duke of York, however, and needs to raise his game to make the breakthrough in Group 1 company.

Similar comments apply to Summerghand (127) and Ventura Rebel (125), who finished fourth and fifth respectively in the Duke of York. Both horses can at least boast the ‘Horse For Course’ Flag having shown up well on their previous visits to Ascot. Summerghand was beaten just a nose under a big weight in last year’s Wokingham over this course and distance, while Ventura Rebel has been placed in both his previous appearances at this meeting. He was second in the Norfolk Stakes in 2019 and third in the Commonwealth Cup last year.

German raider Namos (129) was a three-time winner in Germany last season, but he seemed to find things happening too quickly when eighth in the July Cup at Newmarket and then fared little better when stepped back up to seven furlongs in both the Hungerford Stakes and Challenge Stakes. He produced a career best when third in a Group 3 at Longchamp last month but looks opposable judged on the balance of his form.

The field is completed by a couple of last-time-out winners in Royal Commando (127) and Sonaiyla (126) – albeit both horses need to improve on their recent efforts now stepping up markedly in grade – along with Happy Power (128) and Final Song (125), who are two of the most exposed runners in the line-up and have generally come up well short on their previous attempts at this level.

The market principals look the ones to focus on in this cracking Group 1 sprint. Starman is the least exposed and has the potential to dominate this division so rates a confident selection to build on his Duke of York Stakes victory and gain his most prestigious success yet. Dream of Dreams could be set to play second fiddle for a third time, with Nahaarr sure to be in the mix again too.

Just click here to view the full card and Timeform analysis for the Diamond Jubilee Stakes at Royal Ascot on Saturday. You can subscribe to Race Passes to access every race here.