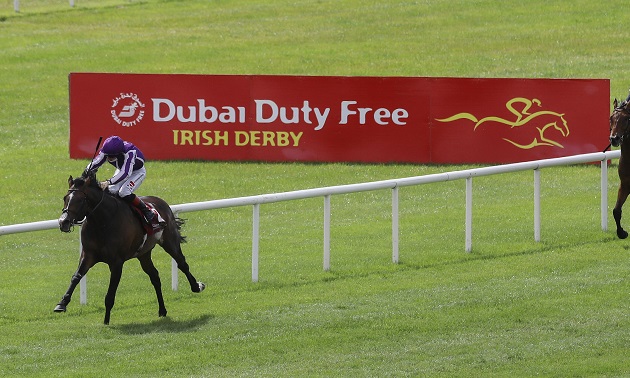 The Comer Group International Curragh Cup (18:43) on Friday is available as a free Race Pass, which means logged-in customers can view all our premium comments and ratings.

Eight runners are set to go to post for the Comer Group International Curragh Cup (18:43), the feature race on day one of the track's Irish Derby meeting.

Aidan O'Brien alone saddles three runners as he seeks his seventh victory in this Group 2 since 2013. The stable's number one contender this year looks to be Wordsworth (116), who is a smart performer on his day, as he showed when beaten just half a length into fourth in the Sagaro Stakes at Ascot in April.

That form sets the standard here on Timeform's weight-adjusted ratings and the drop back in distance will be in his favour after he clearly failed to stay the marathon trip of the Queen Alexandra Stakes back at Ascot last week. This will be a quicker-than-ideal turnaround, but Wordsworth is fancied to overcome that to regain the winning thread.

The three-year-olds Temple of Artemis (105p) and Sussex (97) complete the three-pronged attack from Ballydoyle. Sussex looks out of his depth after he finished only sixth in the Gallinule Stakes at this course five weeks ago, but Temple of Artemis shouldn't be underestimated following a comfortable win at Chester last time. That was a useful performance to defy a BHA mark of 88 on his handicap debut and the way he shaped there suggests the longer trip today could unlock further progress.

Aidan O'Brien has the 'Hot Trainer' Flag to denote that his yard is in top form and so does his son Joseph, who saddles two runners in the shape of Master of Reality (115) and Gear Up (111). Master of Reality won a listed event at Down Royal last season and the way he performed on his return to action at this course last month suggests he retains most of his ability at the age of seven. He seems sure to play a leading role if his reappearance has blown the cobwebs away, whereas Gear Up might find this test stretching his stamina after he won a minor event over a mile and a quarter at Gowran Park last time.

Camorra (113) lines up for Ger Lyons, who also has the 'Hot Trainer' Flag. Camorra had Wordsworth (third) and Master of Reality (fourth) ahead of him when fifth in the listed heat won by Raise You at this course last month, simply lacking the pace to get involved in a race run at just an ordinary gallop. The longer trip here should bring his stamina more into his play and his victory in a Group 3 at Leopardstown last season showed he has the ability to make an impact at this level.

The field is completed by Manu Et Corde (112) and Sunchart (108). The three-year-old Manu Et Corde took a step forward when third on his handicap debut at Down Royal last week, but even his best form leaves him with plenty to find in this company. Similar comments apply to Sunchart, who was been put in his place by the subsequent Gold Cup winner Kyprios on his last two starts for Andrew Slattery, who also has the 'Hot Trainer' Flag.

This is a pretty quick turnaround for Wordsworth having raced at Royal Ascot but he couldn't be in better hands and tackling a more suitable trip, he may outclass these. Master of Reality is fancied to build on his reappearance, with Temple of Artemis, a stablemate of the selection, the improver in the race.