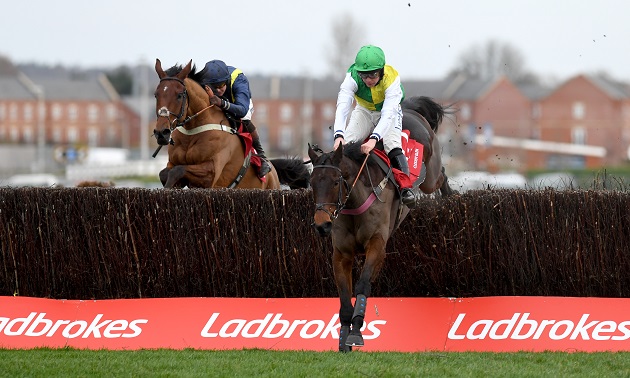 The Coral Gold Cup Chase (15:05) at Newbury on Saturday is available as a free Race Pass, which means logged-in customers can view all our premium comments and ratings.

This prestigious contest will be run for the first time this year under the title of the Coral Gold Cup (15:05) having long been known as the Hennessy Gold Cup and latterly as the Ladbrokes Trophy between 2017 and 2021. 16 runners are scheduled to go to post on Saturday and among them there is the usual mix of smart handicappers and less-exposed second-season chasers, providing all the ingredients for what promises to be another thrilling renewal.

Le Milos (173p) tops the field on Timeform's weight-adjusted ratings having impressed on his debut for Dan Skelton (formerly trained by Tim Vaughan) at Bangor earlier this month, quickening clear on the home turn and just needing to be kept up to his work from there to win by four and three-quarter lengths. That was a career-best perfomance and it earned him the 'Horse In Focus' Flag which identifies him as one to keep on the right side. He is certainly the type to go on improving for his new yard and it would appear that he's been let in lightly here turned out under just a 4 lb penalty.

Remastered (172) is another last-time-out winner in the line-up having won a handicap hurdle at Aintree three weeks ago, seeing things out thoroughly having had another breathing operation during his seven months off. He finished third in the same contest in 2021 and followed that run with a late fall in this race when looking the most likely winner, so his win last time can only bode well for his chance of gaining compensation this time around. Crucially, he is 4 lb lower in the weights than 12 months ago and the 'Horse For Course' Flag next to his name underlines that he should be very effective under these conditions.

Remastered is one of three runners for David Pipe along with Gericault Roque (169p) and Red Happy (160). Red Happy looks up against it from 4 lb out of the weights, but Gericault Roque is more interesting having left the impression the run would bring him on when down the field behind Remastered on his reappearance at Aintree. He showed useful form in his first season over fences, notably filling the runner-up spot in the Ultima Handicap Chase at the Cheltenham Festival, and there could be more to come from him now back chasing at a track where he has gone well before. He too has the 'Horse For Course' Flag.

The Ultima was won by Corach Rambler (169p) and it's worth remembering how impressive he was on that occasion, making rapid headway from three out and quickening clear once hitting the front on the run-in to win by two and three-quarter lengths. He warmed up for this race with a quiet spin over an inadequate trip at Carlisle last month, never really threatening to get involved from rear. Still, that run earned him the 'Horse In Focus' Flag and he should progress and win more good races this season for Lucinda Russell, who also has the 'Hot Trainer' Flag to denote that her yard is in rude health.

Sam Thomas is another with the 'Hot Trainer' Flag and his Our Power (171) looks a big player having stayed on strongly to win the London Gold Cup at Ascot on his reappearance, ultimately winning by two lengths having come through to lead in the final furlong. This will be tougher from a 5 lb higher mark, but he's still relatively unexposed over staying trips and his only previous try at further than three miles saw him finishing an eye-catching fifth in the Ultima.

The Ultima form is also represented by the third Oscar Elite (170), who is yet to win over fences but is clearly on a competitive mark having been beaten less than three lengths from just 1 lb lower at the Festival. He should be sharper for a reappearance run over hurdles at Wetherby last month, while similar comments apply to stablemate Fiddlerontheroof (169), who made his return to action over hurdles at Kempton earlier this month.

Fiddlerontheroof has the 'Horse For Course' Flag having filled the runner-up spot in this race 12 months ago, sticking to his task well to be beaten just half a length. 5 lb higher in the weights today, he is fitted with first-time cheekpieces and not without claims of going one place better than last year if the headgear can eke out a bit more improvement.

A top-class chaser in his prime, Lostintranslation (169) joins Oscar Elite and Fiddlerontheroof in a three-pronged attack from the Joe Tizzard yard. Unlike his two stable companions, Lostintranslation will be making his first appearance of the campaign and that's probably the best time to catch him given that he made a winning return to action last season before going off the boil completely. He has come down a long way in the weights and Freddie Gingell also claims 7 lb.

Busselton (169) is the only Irish-trained runner in the line-up for Joseph O'Brien. He resumed winning ways when refitted with blinkers in the Kerry National at Limerick in September, clearly relishing the longer trip as he kept going well to land the spoils by two and three-quarter lengths after being left clear at the last. A likeable type, he doesn't look handicapped out of things from a BHA mark of 149 as he tries to become the first five-year-old to ever win this race.

A dominant winner at Cheltenham in October, Lord Accord (169) ran at least as well in defeat from a 5 lb higher mark when chasing home Frodon in the Badger Beers Silver Trophy at Wincanton last time, passing the post two and a half lengths behind the winner and likely to have finished closer still but for a mistake at the last. He's a consistent performer on the whole and should continue to give a good account. Back in sixth at Wincanton was Potterman (165), who is hard to catch right nowadays and needs to bounce back now sporting a first-time visor with his reappearance under his belt.

Threeunderthrufive (167) won four times in his novice season over fences and it's not out of the question that he may have more to offer now making the switch to handicaps, particularly with cheekpieces going on for the first time. He blew the cobwebs away with a solid effort over hurdles at Wetherby last month and Paul Nicholls, who also has the 'Hot Trainer' Flag, certainly knows what it takes to win this race.

Venetia Williams won the 2021 renewal with Cloudy Glen and this year she saddles Fanion d'Estruval (165), who was an improved performer last season, notably winning a two-and-half-mile handicap chase at this meeting. However, he has stamina to prove now stepping up markedly in trip for his reappearance and it would take a high-class effort for him to defy top weight anyway.

The field is completed by Annsam (165), who is hard to fancy after disappointing on his return to action at Ascot last month, and Diablo de Rouhet (166), who is 4 lb out of the weights and yet to prove he retains all his ability since returning from over two years off the track in May this year.

After a comfortable reappearance win at Bangor it's likely Le Milos has better to come for new trainer Dan Skelton so he's selected to make light of a 4 lb penalty. Remastered looked set to have a big say in this last year when departing at the fourth last and a reappearance win over hurdles suggests he can figure prominently with a clear round. There's likely even more to come from London Gold Cup winner Our Power so he's also on the shortlist along with Corach Rambler and Busselton.